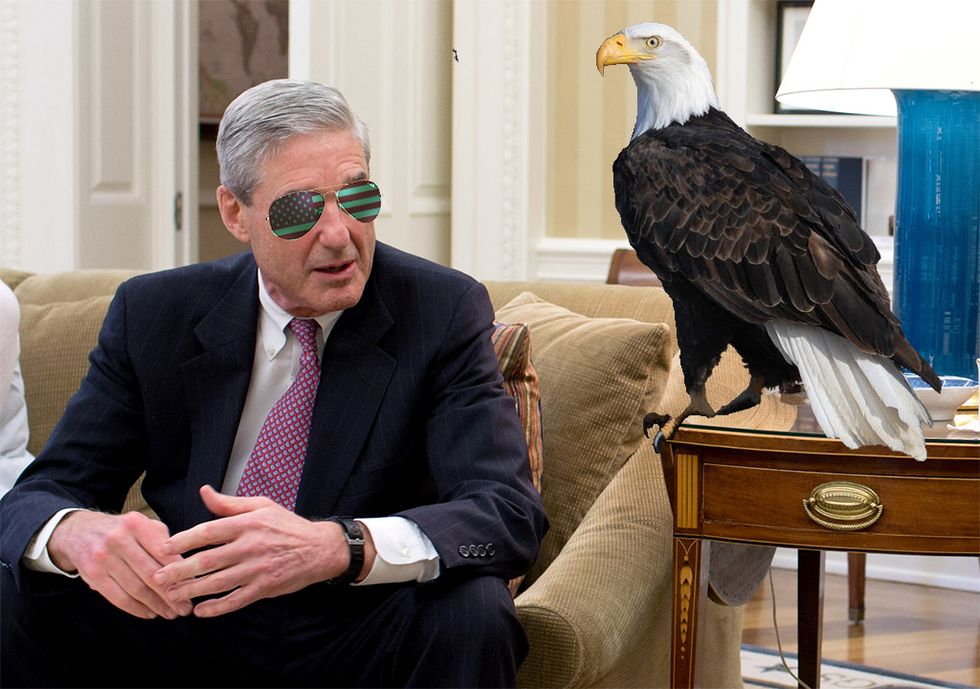 A British tabloid reports Michael Cohen asked the head of a Qatari investment fund for millions of dollars at a Trump Tower meeting just after the election. The gist is that Cohen reportedly would act as a middle-man to funnel the money to "the Trump family." Qatari officials have acknowledged Cohen's presence, but deny any funny business. However, a suit by rapper Ice Cube claims that the same Qatari money man stiffed him on financing for a basketball league around the same time, and during a January 2018 meeting, kept asking about Steve Bannon. [Morning Maddow]

A former Trump campaign official SWEARS he remembers an email from George Papadopoulos talking about Russian dirt on Hillary Clinton back in 2016, but nobody can find #HISEMAILS!

Novartis, that drug company that paid Michael Cohen over a million dollars, has quit-fired the lawyer who made the bribe deal with Cohen.

In another sad, desperate cry for attention, Rudy Giuliani wants to throw James Comey further under the bus, and is promising to use the one year anniversary of the Mueller investigation as a cudgel to beat the investigation into submission. [Archive]

A federal judge has ruled that Robert Mueller definitely has the legal authority to investigate Paul Manafort for money laundering and assorted fuckery on the grounds that Manafort is one shady son of a bitch.

The Senate's Trump-Russia investigation is nearing an end, and that has many people wondering what, if anything, Mark Warner and Richard Burr can agree upon. [Archive]

Trump's White House has opted to scuttle the cyber security coordinator role. The rumor mill is that they couldn't find anyone willing to take the job, even when they offered a lifetime supply of energy drinks and Adderall.

A new WaPo investigation finds the Trump administration scuttled a federal advisory committee on climate change because it didn't have enough businesses represented. When senior NOAA officials complained, they were ridiculed as tofu-eating science dorks.

Chuck Grassley is threatening to say mean words about Scott Pruitt if the EPA starts fucking with biofuels. There's ideology, and then there's big Ag. [Archive]

The Senate Intel Committee is poised to sign-off on Gina Haspel's nomination to head the CIA after Democratic Senators Mark Warner and Joe Donnelly came out in support of her yesterday.

According to a communique from the DOD to HHS, Trump wants the military to house the children of undocumented immigrants in warehouses on military bases. Col. Hogan and Sgt. Bilko will oversee babysitting operations.

This is a story about a football, and how General John Kelly is like the principal of a junior high school in a bad Disney sitcom.

In an effort to silence the waterfall of petty bullshit leaking from Trump's White House, John Kelly has deployed an anti-leak squad to snatch non-government-issued cell phones from staffers. Trump is apparently immune because he's the President, or whatever.

Some White House staffers are sad that Hope Hicks was voted off the island, and nobody misses her more than Trump.

SCOTUS has denied an appeal by former Blackwater contractors convicted in the deaths of 14 Iraqi civilians. Good.

This story of a Marine's sexual assault at a prestigious military training school shows how military culture and protocol discourages women from coming forward.

Trump has tapped Mitch McConnell's brother-in-law, Gordon Hartogensis, to lead the Pension Benefit Guaranty Corporation in the Labor Department. He doesn't really have the qualifications to manage the pensions of 40 million Americans, but he'll be fine.

After a watchdog group found long wait times at Social Security offices, a bipartisan group of senators are raising cain about old people getting screwed by the SSA.

Trump crashed a Republican Senate luncheon to brag about polls and nuclear war, and bitch about Obama, hippies, Democrats, and NAFTA. According to the report, Trump spoke so long attendees were left speechless.

Despite the potential $200 million jolt to local businesses, San Antonio has declined an offer to host the 2020 GOP convention. In a statement, city officials told the RNC, "We're already busy washing our hair..."

Here's a breakdown of all the congressional races in Pennsylvania!

Yesterday was a great day for the #vagenda as voters nominated a lot of women for the November ballot!

An Oklahoma Republican gubernatorial candidate is denying allegations that he supported euthanizing poor people "who cannot contribute to society any longer" in a now deleted Facebook posting by suggesting he was hacked, though he still hasn't filed a police report.

Around 20,000 teachers and students are expected to rally in Raleigh, North Carolina, for an increase in state funding for education. In response, the state Republican party is bitching about liberal city dwellers, and has rented a bounce house to keep kids out of the press. Here's march info, if you need it! #RedForEd.

A new poll by United Way shows that 40 percent of Americans can't afford the basics of a middle-class lifestyle, and regularly struggle with rent, transportation, cellphones and child care.

North Korea caught the Trump administration off guard last night when it threatened to walk away from talks with Trump unless it agrees to back off "unilateral nuclear abandonment." A DPRK spox cited a "repugnance" to the rhetoric of John Bolton as part of its reasoning.

The US blocked a UN Security Council statement to investigate the deaths of 58 Palestinians by Israel, and is blaming Hamas for getting everyone all riled up.

TMZ is being a royal pain in the ass to Meghan Markle and Prince Harry.

Buzzfeed has done some sleuthing on Candace Owens, the pro-Trump Youtuber and crazypants urban outreach director for Turning Points USA (a conservative PAC), and found that Owens used to be the CEO of a decidedly anti-Trump website that mused about Trump's babydick, railed against "All Lives Matter," and explained why it's totes cool to bang your friend's ex. Stanford College Republicans have invited Owens and the head of Turning Points to talk to their squad of young Reaganites about gender identity, gun fetishism, Randian economics, and how "white privilege is a lie.”

Some asshole went on Fox News and defended the Three-Fifths Compromise by saying it let black folks finally became people...well, three-fifths of a person anyway.

That awful rebooted show about some loudmouthed Trump supporter will focus less on politics after people complained about inherent racism.

Since they have nothing to talk about, some Republican hopefuls are still trying to run campaigns around Colin Kaepernick, the black sportsballer who protested police abuse by taking a knee during the national anthem.

As typically left-leaning news outlets start erecting paywalls, the pro-Trump press has been steadily growing and amplifying Trump's rhetoric, according to some media nerd at NYU.

Twitter will start squelching the voices of shitty and spiteful trolls through a series of several changes that will reduce the number of people who can see their tweets.

A major player in the cyber security world has been exposed as a sham after its CEO was discovered to be a con artist that spammed intel agencies and DC legislators with fake credentials, with bogus news articles and reviews, and social media clout.

The CIA has ID'd a suspect in last year's Vault 7 breach and dumping to Wikileaks as 29-year-old Joshua Schulte, a former CIA software engineer who designed the malware.

Brace yourselves, piece of shit and FCC Chair Ajit Pai has announced that net neutrality will officially end on June 11. Senate Democrats are still moving ahead with a CRA to repeal the order, 23 states and the District of Columbia have filed suit challenging the rule.

NICE TIME! A bitchy lady called the cops on a guy who was investing in a house, but the cops took his side and threatened to arrest her. When she told him to hurry up, the cops told her, "He can take all day." LOLOLOLOLOL.

And here's your morning Nice Time! A baby bontebok!

We aren't cutting shady multi-million deals, but we are ad-free and reader-supported, so buy us some coffee, or a beer!