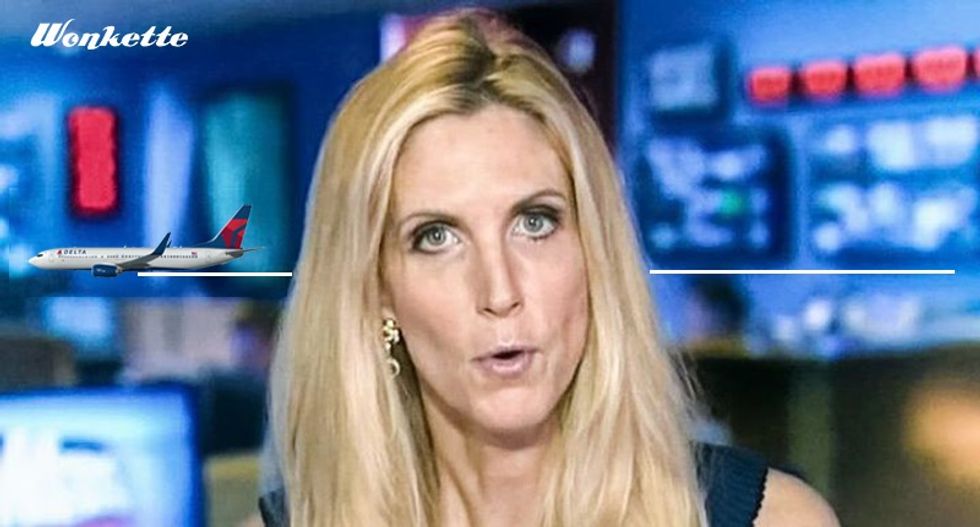 Maybe it's karma! Back in April, when that guy got dragged out of his seat on United Airlines (not to mention battered a bit), Ann Coulter, professional aggrieved person, twote, "Sorry about the dragging, but the convicted pill-mill doctor should be deported," because of course the passenger, David Dao, was originally from Vietnam and was a Bad Person. But when Ann Coulter, professional aggrieved person, was inadvertently re-accommodated to another seat on a flight Saturday, she went more than a little batshit crazy on Twitter. Fine, crazier.

First, she proclaimed Delta "the worst airline in America, because they reassigned her extra-legroom seat to another passenger -- without so much as a single truncheon being used on her, we should note. She documented the injustice, with photos and extra outrage:

Knowing how Twitter works, we'll just assume both the flight attendant and the passenger who got Coulter's seat -- which Coulter PRE-BOOKED! -- have both entered the Witness Protection Program for their own safety. As the Washington Post points out, they may have been

wondering what will happen now that they have been photographed by the same unpredictable commentator who once wished assassination upon John Edwards, declined to condemn an abortion doctor’s murder and joked about poisoning a Supreme Court justice.

Fair enough, but WaPo didn't even mention the time she wished Tim McVeigh had blown up the New York Times instead. Maybe they secretly sympathize.

Coulter was just getting started, of course:

Shame on that woman who just waltzed tight in and took Coulter's seat! Delta says Coulter was moved to a seat in the same row, but that's not the point; she was being oppressed! According to the Delta spokesperson's email to WaPo,

It appears her new seat was in the same row, just not the exact seat she had selected. It was an exit row seat (has extra leg room) [...] She was moved from an aisle to a window. Same space, a few seats over.

That is not the point! She personally PRE-BOOKED AN AISLE SEAT. She NEEDED that aisle seat, and the woman who got it DID NOT.

Worse, she was treated TERRIBLY by GHOULS!

Note: Ratched. It's Nurse Ratched. A lot of people make that mistake. Still, we're glad to see she's now against the torture of her fellow human beings, which seems an improvement over her attitude in 2014 when she tweeted she thought it was pretty good, as long as you call it something else:

Or perhaps that time she explained why NSA spying on Americans was no big:

I think the government should be spying on all Arabs, engaging in torture as a televised spectator sport, dropping daisy cutters wantonly throughout the Middle East and sending liberals to Guantanamo.

We suppose we might watch a TV show with Ann Coulter being told to change seats. But not on pay-per-view.

Still, Delta was willing to offer compensation for the extra bit Coulter paid for the aisle seat. But they weren't content to offer her that pittance; they had to lecture her, because they are HATEFUL MONSTERS:

No! No! Not acceptable! Human rights violation! Where's Amnesty International when you really NEED them?

Oh, what a world, what a world... Fortunately, Coulter has at last found a way to put her ordeal in proper context:

Yup. Gently chiding Ann Coulter and asking her to please not be a huge jerk is fascism (remember, Hitler made people change their seats, and didn't respect their legroom AT ALL, especially in boxcars), and what this is really all about is a bunch of damned Politically Correct Social Justice Warriors oppressing people. HOW CAN THIS HAPPEN IN DONALD TRUMP'S AMERICA????????

Mind you, there are some who are less than sympathetic:

Not the same at all, dude. We're talking about REAL oppression here.

Fortunately, the Free Market will fix this!!!!!

Yr Wonkette has no idea why Delta moved Coulter. Maybe a glitch, maybe they pre-booked the same seat upgrade for two people. In any case, we hope the woman who got Coulter's seat is safe and not getting harassed. And for the love of Crom, we hope it doesn't turn out her kitchen has granite countertops (yes, that was Michelle Malkin -- we mix up our rightwing rage-harpies sometimes).

Yr Wonkette flies coach and gratefully accepts your donations without whining. Please click the "Donate" clicky and we'll be ever so happy.