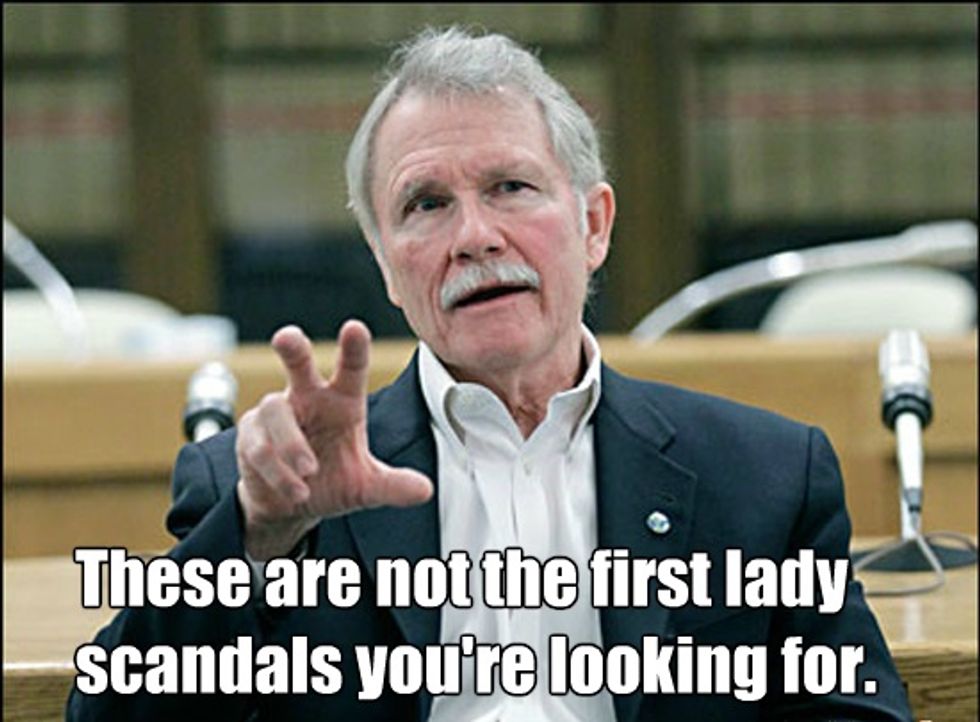 Well, this is completely unanticipated! Oregon Gov. John Kitzhaber has resigned, just days after announcing that no way in the world was he going to resign, which of course was obvious code for "Yeah, call U-Haul and reserve a truck for this weekend." He was sworn in for his fourth term as governor just a month and a day ago.

Kitzhaber resigned in the middle of an influence-peddling investigation of his fiancée, Cylvia Hayes. Let's let the Washington Post explain the dealio:

Oregon’s first lady directed state employees on the implementation of a new state policy while being paid by an outside group to advocate for that policy, according to e-mails released by a state agency that show Gov. John Kitzhaber (D) was also involved in the decision-making process.

The controversy over first lady Cylvia Hayes’s private work, for which she was paid $25,000 by a New York advocacy organization, has sparked a firestorm in Oregon. Kitzhaber has struggled to describe Hayes’s dual role as both one of his top public advisers and a private consultant with business before the state.

Yeah, that's not something you want to be doing. Hayes was involved in Oregon's adoption of "an alternative economic measure, the Genuine Progress Indicator," which would replace the Gross Domestic Product in Oregon budgeting and economic statistics. And GPI just happened to be advocated by Demos, the group that was paying her.

To make matters worse, it was revealed Thursday that Kitzhaber had asked state Information Technology workers to delete everything in his personal email account last week; happily, the workers and their supervisors refused. He probably just wanted to get rid of all that spam from change.org. Unbelievable how that stuff piles up after you sign one little online petition.

Kitzhaber will leave office next Wednesday, Feb. 18, and will be replaced by Secretary of State Kate Brown, who had her own bizarre adventure earlier this week when Kitzhaber summoned her to return to Oregon from a meeting in Washington DC, presumably to discuss his resignation; when she arrived, however, he told her he had no intention of resigning, but also wanted to discuss "the transition." Which wouldn't be needed because he wasn't resigning. Good thing they had that little talk, huh?

After he leaves office, Kitzhaber is expected to resume his earlier career as a Ted Turner impersonator.