Panicking Conservatives Decide To 'Whatever' School Shootings, Pivot To Abortion 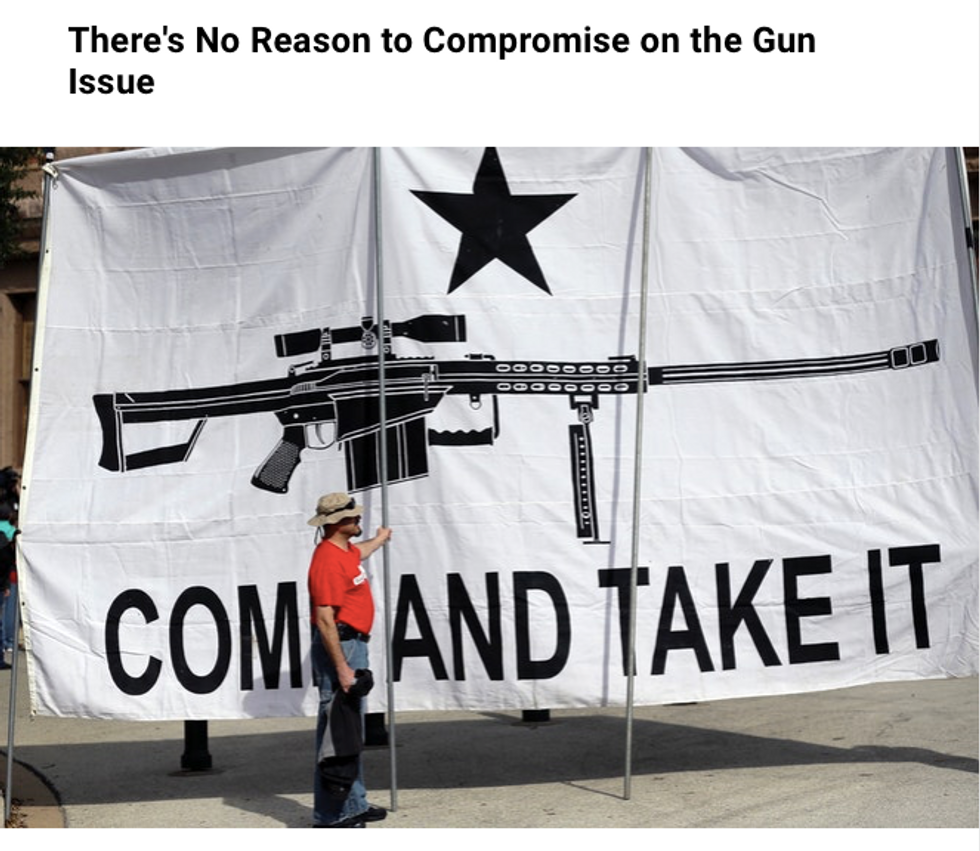 On Wednesday afternoon, a picture posted to 4Chan and an article on Infowars convinced a great many internet conservatives that the Parkland, Florida, school shooter was a hardcore liberal associated with Antifa. AND LO, THEY WERE OVERJOYED.

It looked, for a moment, like all their prayers were about to be answered! Hillary Clinton and all those other libs would finally take responsibility for radicalizing the youth of America. That would really teach all those smug liberals saying that stupid gun control was the answer, when it actually turns out that it is LIBERALISM that is going around murdering all the people!

An Open Letter To Idiot InfoWars Reporter 'Kit Daniels,' Who Is A Vile Maggot

QUIT YOUR JOB AND DELETE YOUR ACCOUNTS. ALL OF THEM.

Except... it wasn't true. The kid in that picture? Not Nikolas Cruz! Another person entirely. Who did not shoot up a school. In their desperation to want to believe that a liberal committed this crime, they defamed an innocent kid who had nothing to do with anything. Good job!

As we now know, MAGA people do, in fact, "do this crap." Nikolas Cruz was one of them.

This may shock you, but it does not seem as though any of these people so far have taken the "responsibility" they had so hoped to see from the Left had Cruz actually turned out to be a liberal. They are not considering that their ideology or rhetoric could have motivated him in any way, and -- mostly -- have jumped squarely onto the conspiracy train.

Other conservatives, however, have responded to the news that Cruz was a conservative by deciding that actually, school shootings are not even a big deal anyway, because abortion (and immigration?).

This is, of course, not at all surprising. Conservatives tend to stop caring about human life just as soon as it exits the womb. After that, fuck human life. It's also not surprising that they feel that women should just be totally cool with having their lives (and bodies) ruined by an unwanted pregnancy, but lose their minds at the thought of being mildly inconvenienced by background checks, closing of gun show loopholes, and access only to non-military grade weaponry.

Erick Erickson, of Ericksville, Ericksylvania also has some thoughts on school shootings and abortions, in what is definitely one of the top 10 worst takes of this week, titled "There's No Reason to Compromise on the Gun Issue" and subtitled "Abortionists kill more kids each year than mass shooters, but let's talk about the latter and not the former."

That is a good point, Erick! Why are we talking about mass shooters anyway? Is it maybe because we just had another mass shooting? What would you prefer? That we just ignore them because you think abortion is worse? I guess so!

Abortionists, by the way, don't "kill kids." Why conservatives can't quite muster up the same empathy they have for clumps of cells when it comes to actual living, breathing human beings with lives and families who love them is beyond me.

In his bad take, Erickson explains that although the vast majority of the country wants more gun control, Republicans should not let them have it. Why? Because Democrats won't let them ban abortions.

There's a pretty healthy consensus in the country that we could expand background check requirements for gun ownership. There is a bipartisan congressional consensus to ban the bump stock, but the congressmen involved in drafting the legislation got too clever by half and tried to ban handguns in the language.

There are actually lots of bipartisan deals that could be had, but there is no reason and conservatives know it. There is, for example, a bipartisan consensus to ban abortions after twenty weeks in this country. But that won't happen either for the same reason.

That abortion ban? Not actually all that bipartisan. There were three Democrats who voted for it -- Sens. Joe Donnelly, Bob Casey, and Joe Manchin, the three pro-life Democrats in the Senate. That barely counts.

"The media and left always demand the compromises come from the right without ever giving up anything of their own," he writes.

Erickson, apparently, was unconscious during the entire Obama and Clinton administrations. We compromise on a lot. We treat conservatives like delicate flowers who will lose their very minds if they have to deal with too much social change. Look at how ridiculously long it took for gay marriage to be legalized! Twenty years of you people dipping your toes into the water and screaming "No! It's too cold! I'm not ready!"

Clinton, for example, wanted to allow gay people in the military. But conservatives cried and cried and cried that they were too ascared of gay people and we ended up with "Don't Ask, Don't Tell," which was stupid. After decades -- DECADES! -- of debate about a national health care program, Obama settled on the one advocated by Richard Nixon and the Heritage Foundation. That was a compromise! A big one!

But apparently it's just not good enough for Erick if we don't give up on abortion, and if we aren't willing to give that up, then HE WILL GIVE US NOTHING.

So there's no point in compromise on the issue. The left/media only what the right to move in their direction on these issues. They do not treat conservative positions with good faith, honesty, or candor. The media will focus on guns for a week following a mass shooting, but can barely give the March for Life the time of day. The media wants to spend inordinate amounts of time focusing on the boy who wants to pee in the girl's bathroom as if he is a civil rights pioneer, but never wants to focus on the Christian who might lose her business for not wanting to provide goods and services to a gay wedding. Well, in fairness, they will focus on that lady, but only to portray her as a bigot.

Our direction? You mean... forward? Yes, we do. Shockingly enough, we don't want to move backwards. We are tired of having to coddle you all through every advancement in the direction of civil and social rights. We're tired of the baby steps, the baby steps are stupid. I don't care about "the Christian who might lose her business" because she won't serve gay people any more than anyone ought to have cared about Lester Maddox -- a very Christian man, by the way -- losing his stupid chicken restaurant because he didn't want to serve black people.

There is just no point in conservatives compromising on guns or any other issue because the left/media idea of a compromise is where the right concedes the left's points. There is no real effort to find middle ground or common ground.

OK, Erick. Let's imagine a world where conservatives had never "conceded our points." You all would still be crying about women in your voting booths and black people at your lunch counters. I mean, sure, there are still those of you who are crying about that, but not quite as many. Your "points" don't tend to work out so well. We have pretty much let you have your way on guns for decades now, haven't we? That's a pretty big ticket item, I'd say. It cost a lot of dead bodies, a lot of dead children. You got your wars, your war on drugs, you got your extreme prison sentencing... and again, does not seem like any of those things have worked out too well. In fact, I cannot think of a single conservative policy that has ever led to anything good for our country.

Banning abortion, also, would not work out well. We're not compromising with you on this, because we already know what happens when abortion is illegal or overly restricted, and it is nothing good. We already know! There are people alive right now who have lived during a time when it was illegal, people who live in other countries where it is illegal, and it turns out very, very poorly. It doesn't even result in fewer abortions, just less-safe abortions. It's not as if things would be different this time around.

Compromising with you either means incrementalism -- which we do a lot more of than I would like -- or it means doing things that didn't work out so well the first time, or not changing things that are bad because you are uncomfortable with them changing. We do a lot of that, too.

The fact is, of course, this wouldn't be the conversation we'd be having if the shooter had, in fact, been a liberal. This is grasping at straws, it is "look here, don't look here." It's a desperate plea for no one to suggest that this is the natural consequence of conservative "points" and policies, of nurturing and coddling bigots who "aren't ready" for social change, of opposing gun control.

But as you pointed out, Erick -- most people in this country support more gun control, and we are sick of this shit. So sure, tell Republicans to keep clinging to their guns and the NRA until we give up our reproductive rights. I'm sure, like so many of your pother "points" and polices, that will work out very well for you.

Wonkette is independent, woman-owned, ad-free, and brought to you by YOU. Won't you click to bring you more Wonkette?