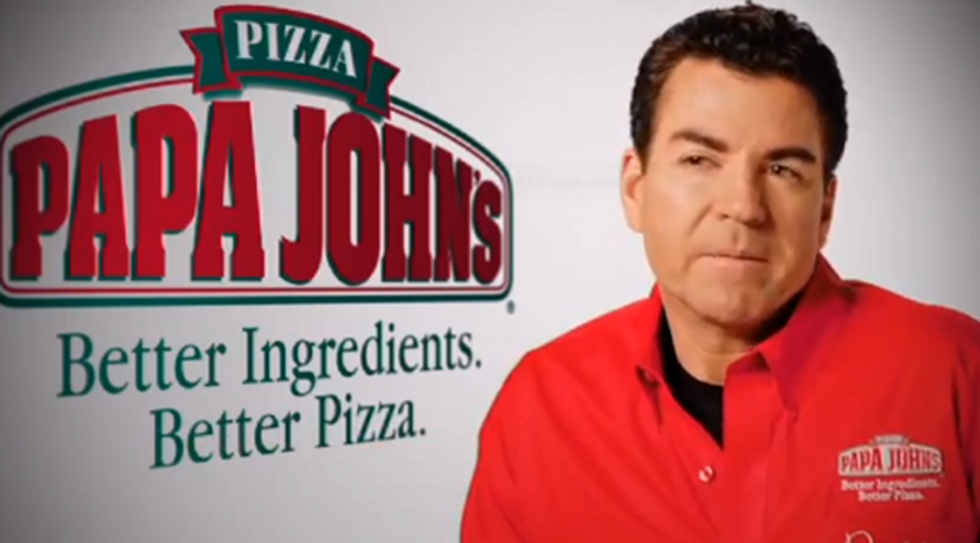 Last week, John Schatter -- the "Papa" of "Papa John's" -- made headlines for comments he made on an earnings call about how all those football players protesting police brutality were really cutting into sales of his shitty pizza. And how was even that fair?

If you were anything like us, you thought, "Man, what an awful asshole! Though not terribly surprising given that time he tried to convince the world that Obamacare was bad because giving his employees health insurance would raise the price of his pizzas 15 WHOLE CENTS!"

But, if you were anything like the Nazis on the Daily Stormer, you decided that Schatter was definitely "/ourguy/" and decided that from then on, Papa John's pizza would be the official pizza of the alt-right. Which makes sense considering that both of those things are garbage.

An article on the site titled "Papa John’s Pizzas Disgusted with Anti-White NFL, Pulls Ads" (which did not actually happen, but whatever), was illustrated with this charming image.

So Papa John is a major, long-standing sponsor of the NFL. And yet even they’re panicked about what’s going on, fearing that the toxic feelings towards to sports organization might rub off on them.

This might be the first time ever in modern history that a major institution is going to be completely destroyed explicitly because of public outrage over their anti-White agenda. The fact that other companies are taking notice and adjusting their policies is a major turning point.

It’s starting to make economic sense to be pro-White, even for these kiked, evil corporations.

Perhaps surprisingly, Papa John's was not actually happy with its newfound status as the "official pizza of the alt-right" and is now saying it does not want Nazis eating its pizza. Weird!

Peter Collins, the senior director of public relations at Papa Johns, said in a statement: “We condemn racism in all forms and any and all hate groups that support it.”

“We do not want these individuals or groups to buy our pizza,” he added.

Here is the thing, Peter Collins. If "Papa John" is going to go around suggesting that NFL players should stop protesting police brutality against black people because it is hurting his pizza sales, the only people who are going to want a piece are going to be Nazis and Nazi-adjacents. Perhaps, as senior director of public relations, you could talk to him about how he should maybe not say things like that. Is that not part of your job? What did you expect would happen?

I am not going to buy crappy sugar pizza from a German dude who pretends to be Italian-y for the purpose of selling said crappy sugar pizza to begin with. Because I happen to find that gross on multiple levels. That will not be happening ever. But even if it were good pizza, I still would not purchase it because I like my pizza with green peppers, mushrooms and onions, not with a side of "Shut up, black people."

Only Nazis do that. And now you may do your OPEN THREAD.