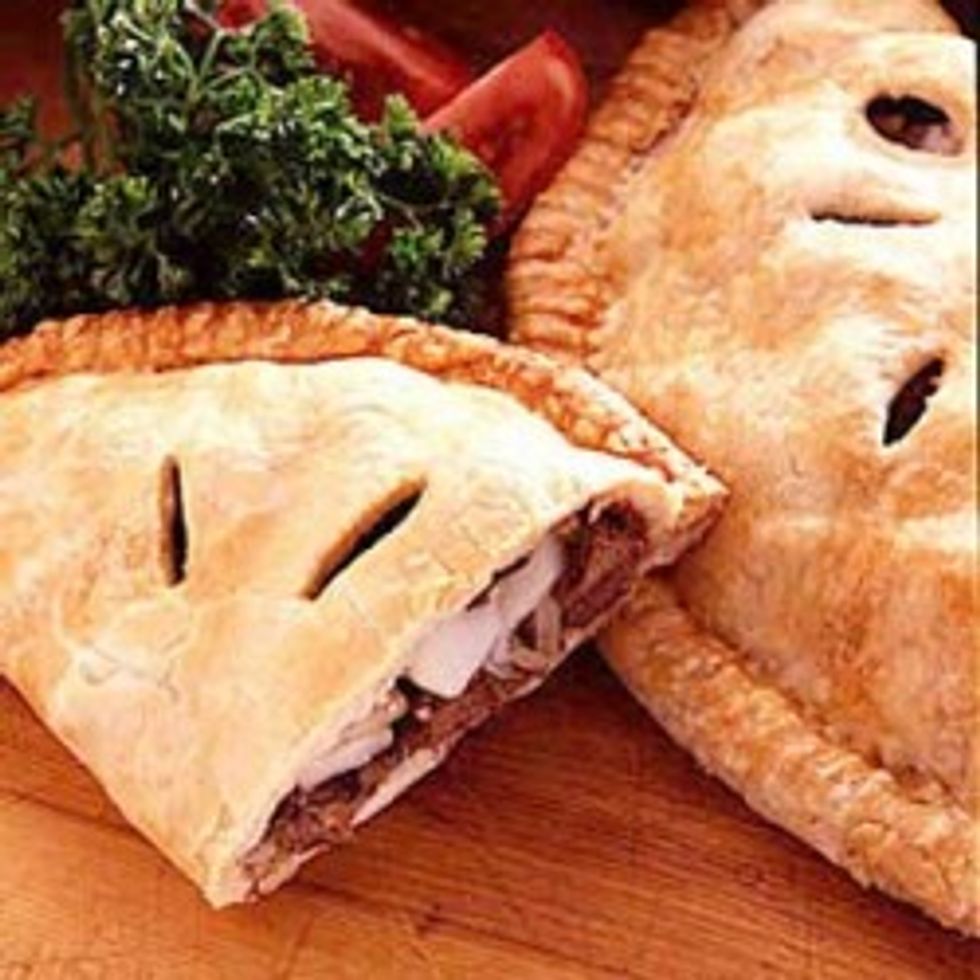 The Land of Newz is all aflutter this morning about the UK's plunge into a double-dip recession that is the worst since 1975. What is the esteemed Members of Parliament's solution, in line with theirsuper successful austerity plan? A 20 percent tax on hot pasties, of course. No tax on cold pasties, though. So, phew. STAND DOWN!

While London Bridge is falling down, MPs think it's extremely important to spend their precious time interrogating each other as to the last time they'd eaten a hot pasty or bragging about how tasty was their latest pasty. Meanwhile, enraged Master Bakers and Pasty Makers, gathering at Pudding Lane, will finish their anti-tax protest march today on the steps of Whitehall, hoping that "politicians will be lured by the taste of an authentic Cornish pasty" enough to give pasty pounding peasants a little tax break.

As mutton grease dribbles down the triple chins of pasty-patronizing Parliament, and housepersons all over the land are whinging to their neighbors about the pasty outrage, bankers and corporate moguls are laughing their asses off, sipping French champagne and nibbling their tax-free caviar. Why? Because 2011 bank bonuses in the UK were in the billions, the UK's corporate profitability bounce back in 2010 and 2011 was extraordinary… and globally, "2011 was a banner year for luxury brands, some had more sales and profits than 2007, just before the global financial crisis." OK, so there was a little slump, which caused some poor jetsetters to suffer: "Now, instead of buying three or four handbags, they might buy one for two-thirds of the value of all four put together."

A lone voice rose above the petty pasty pettifogging to publish a "Lesson for Obama" in the Guardian, hoping to convince Obama of the failure of austerity, so that when our fearless leader gets re-elected, he can convince all those Republicans (who signed Grover Norquist's NO TAX INCREASES EVER! pledge), to raise taxes on the rich so that the US government can invest in infrastructure and all those other ridiculous fucking expansionary things. Good luck with that! Oh, and the lone voice? Robert Reich, professor of public policy at the University of California at Berkeley and Secretary of Labor under Bill Clinton. I guess US newspapers weren't interested in his opinion. They're too busy covering sexy secret service men.

Well sex is far more interesting, right? So keep watching The Kardashians and accept your patriotic responsibility to shoulder the immense debt created by your betters and happily pay more taxes on meat-filled dough. Then, the wealthy can buy more purses! Economics 101.