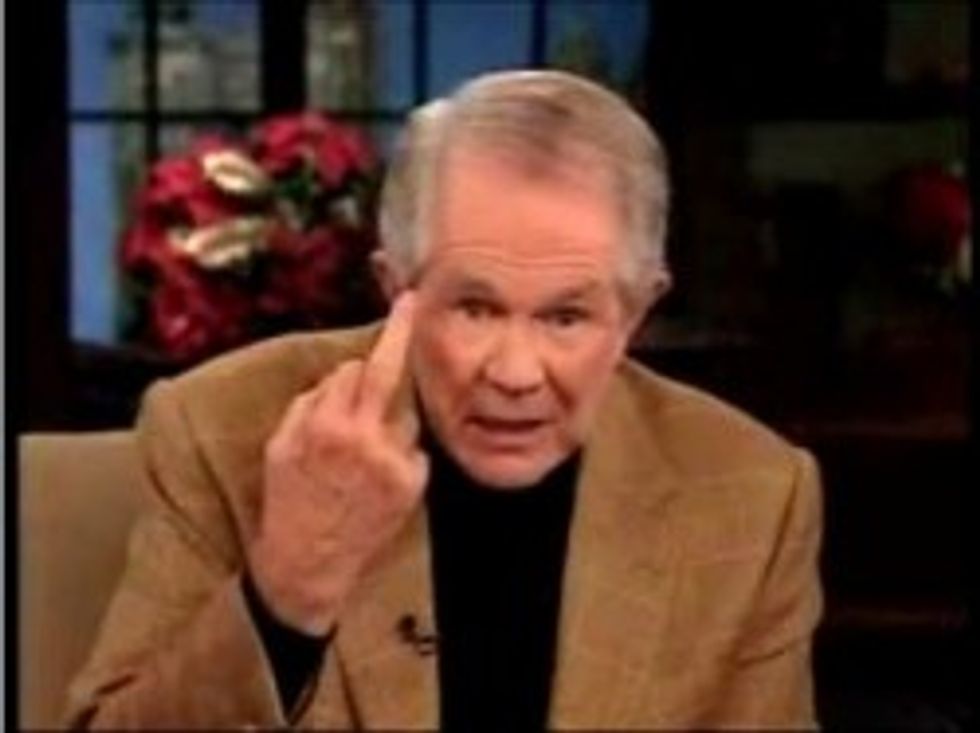 Pat Robertson, the 81-year-old titan of Goddist bombast, has proven that some boxed sacks of two-buck chuck age well if you can wait eight decades and have nothing else to drink, not even water. Robertson experienced a brief tic of normalcy when he came out of the marijuana closet this week, telling the New York Times in an interview, "I really believe we should treat marijuana the way we treat beverage alcohol." SENILITY. This has prompted a verbal kiss from LEAP, that group of law enforcement peeps that support marijuana legalization: "I love him, man, I really do," said its executive director Neill Franklin, forgetting everything. How does Pat plan to show his love? Despite an impoverished Caribbean island-sized amount of evidence to the contrary, Robertson wants to warn everybody that he is "not a crusader."

Robertson expressed that he feels too many young folk are being thrown in jail for holding spliffs in their hands, which only makes life seem more useless and impossible and worth smoking marijuana or crack continually through once they get out of jail some X years (where X=10, sometimes, which is insane!) later. So that's nice, old man, but where's the part where you want everybody to be a white, wealthy Christian? Oh:

I believe in working with the hearts of people, and not locking them up.

Robertson recently said that the victims of the tornadoes in the Midwest should have prayed more, so, interesting that he doesn't think people with chronic pain should just pray the pain away. He evidently knows of the beauty of dope personally.

Miraculously, Robertson's comments have led Focus on the Family to not say anything for the first time in years. But the generalizations that have wafted out of the behind of Robertson's newly soaring spirit are verging on the useless and insane:

If people can go into a liquor store and buy a bottle of alcohol and drink it at home legally, then why do we say that the use of this other substance is somehow criminal?

"This other substance." Clearly leaving room to promote prescription heroin later on down the road, once weed stops doing it for him. Then LEAP head Franklin similarly chimed in in defense of Jesus's laissez-faire ways:

If you follow the teaching of Christ, you know that Christ is a compassionate man. And he would not condone the imprisoning of people for nonviolent offenses.

In that case, jails, please release the following people today:

-- And many more! But actually not that many at all! Because the justice system is funny. Jesus wants to "work with the hearts of" billionaire financiers, but when it comes to tornadoes, he just ... doesn't really know what to tell you. [High Times/New York Times]