Pat Robertson Would Like To Starve All The Drug Addicts To Death, Just Like Jesus Would Have 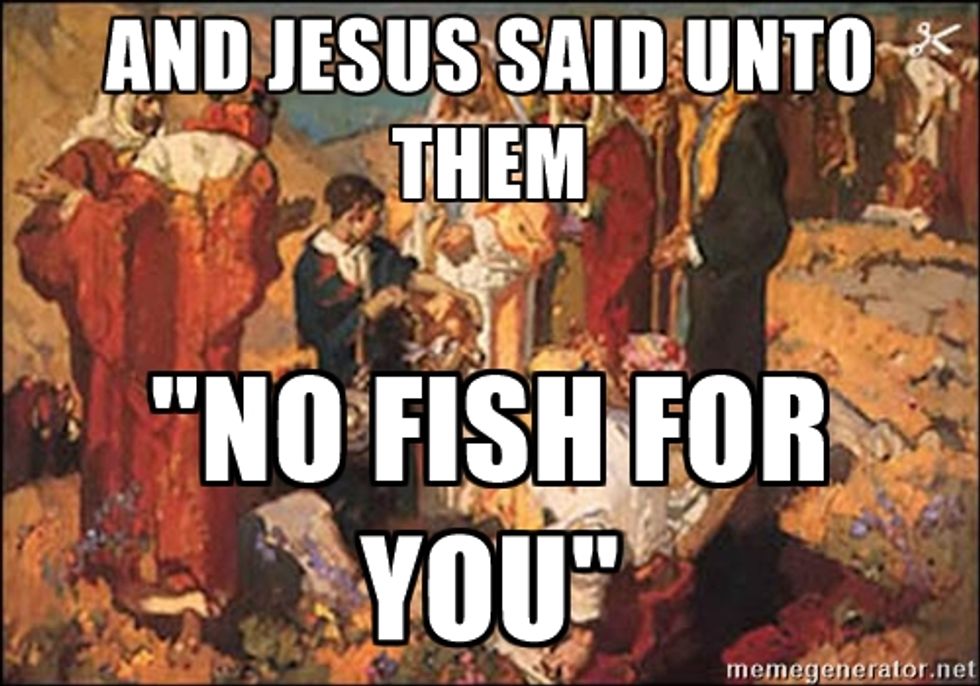 Pat Robertson, a man who earns his living by going on television and telling elderly people on Social Security and the unemployed that if they give him some money Jesus will find them a job, has had it UP TO HERE with lazy, freeloading drug addicts.

A probably fake reader "wrote in to" the show in order to complain about drug addicts, citing a Boston Herald article about how homeless people with drug problems making frequent visits to emergency rooms are a drain on the Medicaid system, and her own theory that drug addicts are purposely overdosing in order to be revived with Narcan. Which, I think we can all be sure, is not a thing. Call me crazy, but I am just going to guess that a 60-year-old woman who writes letters to "The 700 Club" does not have her finger on the pulse of what drug addicts are or are not doing.

Robertson responded by misinterpreting a Bible verse and also FDR, as he is wont to do:

"The bible says 'If any man will not work, let him not eat. Now, that didn't say 'If any man will not work, let him go to the soup kitchen and let the government pick up the tab. That's not, I mean it's tough love. If the guy doesn't work, let him not eat. There are a bunch of people who're just bums, they're trying to ride in on the charity of others. Tough love will say, 'I'm not going to give you something. I was reading an article today about FDR and welfare, and he said that this is like, I'm paraphrasing now, but it's like a narcotic that numbs people. You cannot continually give things to people who are down and out, you take away their sense of work and their sense of pride If these people are out drugging themselves, let 'em starve to death. I know that sounds hard, but that's the way it's got to be."

This is a quote from Thessalonians 3:10 that is actually not so much about starving the poor as it is about how it is not cool for people to stand around gossiping in church, and doing nothing while taking advantage of that church's mission to feed the poor.

The FDR quote he was referring to wasn't about criticizing people for needing to be on welfare, but rather about establishing an emergency public works program to provide jobs for people. Like most people not suffering from paranoid delusions about evil lazy poor people taking all our money to buy king crab legs and whathaveyou, FDR was aware that most jobless people actually would like to have jobs that pay them enough to live on. The problem is not so much "lazy people" as it is a lack of available employment.

While it is somewhat unorthodox to use one's very own mother as a source, by sheer coincidence mine happens to be a certified drug counselor who used to work as a patient advocate in the Boston University Hospital emergency room. So, I called her to ask her how she felt about Pat Robertson's plan to solve all the drug addiction. After a festive series of expletives, she told me that not only is starving drug addicts not a particularly good way to get them to go clean (shocker!) and that Robertson has "no grasp at all of addiction, period," but also that the real problem is not actually addicts who refuse to get clean and are a "drain on the system." Because addiction is a disease, and just as deserving of medical treatment as any other medical condition.

The harder thing, she says, is finding beds in rehab centers, for those who do want to get clean, but who are not celebrity drug addicts "like prominent Christian Rush Limbaugh." "BEDS ARE LIKE GOLD. They're like gold," she said. Then, after we hung up, she texted me "More rehab spaces is key! For initial detox and follow up treatment. And for everyone, not just the lucky ones!"

Perhaps if Pat Robertson actually wanted to do something to help get people clean that would be a lot more effective than letting them die of starvation, he could take some of his estimated $200 million to $1 billion dollars and buy some rehab spaces. Or he could just continue on panhandling on TV and accusing people with addiction problems of just being lazy!