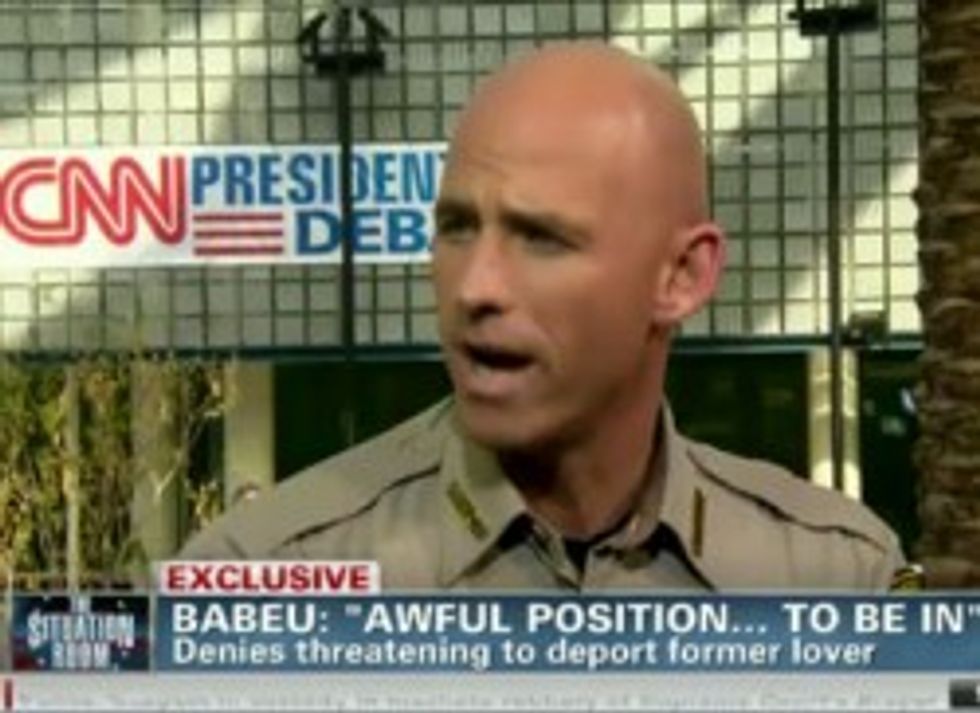 Every inhabitant in the entire solar system and possibly as far away as the alternate universe where Rick Santorum becomes the American president has now heard the story about wingnut Arizona sheriff Paul Babeu trying to deport his secret illegal Mexican gay lover, but did you know that this was only one of two insane stories about Babeu's serially creepy, unethical behavior that reporters were learning about at the time? ABC15 in Arizona was also about to out Babeu after they spent five months digging up dirt from court documents in Massachusetts alleging that Paul Babeu's 1999-2001 tenure as the evil headmaster of an unlicensed private reeducation camp gulag for troubled teens included the use of punishments that amounted to physical abuse and that oh yeah, his sister says he was shacked up with one of his male students. Paul Babeu sure does seem to enjoy the secretive sexytime with members of vulnerable groups that he treats like shit in his official capacities! Where else has Paul Babeu worked? Nevermind, we don't actually want to know.

Really, what is it with Arizona sheriffs and sadistic torture camps?

Being “cornered” was considered by many students to be the worst punishment.

That meant sitting, facing the wall for hours, days and sometimes weeks.

“You have to sit like this with your feet flat on the ground. You can't cross your legs,” said [former student Holli] Nielsen. “From 7 in the morning to 9:30.”

In one case, records show a student with bi-polar disorder, ADHD and impulse control disorder was “cornered” for "weeks on end."

The student’s medication was not monitored properly. He began to "urinate and defecate" on himself. He was also taken to the hospital for pneumonia.

Days later, that same student was returned to DeSisto and sent back to the corner.

We asked Nielsen if Babeu was aware of students being “sheeted’ and “cornered.”

Nielsen replied, “He was there for that. Yes. He was certainly aware of that. There were a lot of things that happened there that probably shouldn't have.”

Aaaaannnnnnnd then there's this detail:

Lucy Babeu told the ABC15 Investigators she confronted her brother after finding a student from DeSisto school living with Babeu.

“I said what is this student from Desisto doing here? He says, ‘Lucy, he's my boyfriend. I love him’.”

Lucy Babeu told us her brother was having a relationship with the male student.

“I said Paul get a hold of yourself here,” said Lucy. “You were his teacher! You were his Executive Director! You can't do this.”

(It is admittedly mysterious as to why Babeu's sister told this to a news team, years later, instead of to, you know, authorities or parents or really just anyone else at all, when she found out about it.)

Anyway, Paul Babeu should go back to running for Congress, immediately. [ABC15; thanks to Wonkette operative "Mookey"]