Paul Ryan Is Donald Trump's Best Boy Now, Won't Ever Have To Go Back To The Cornfield

Republicans in the House of Representatives managed to scrape up enough votes to pass the terrible "American Health Care Act" this afternoon on a vote of 217 to 213, dismantling the Affordable Care Act (your "Obamacare") and replacing it with a big bag of rabid otters (at a great price!). The bill will now go to the Senate, where it will either die quickly, like Republicans want people who can't afford healthcare to do, or where, inspired by their House colleagues, Senate Republicans will pass some slapdash mess that undoes the ACA, gives an enormous tax cut to the rich, and lets uninsured Americans fend for themselves, because fuck them. Or perhaps Senate Rs will look at the people mobilizing to burn down the House, and move very carefully. It could happen.

Prior to the vote, the House dedicated an entire hour to one-minute speeches on the measure. That's really all the debate it needed, since for one thing, it's already been not-debated-at-all once, and for another matter, the Senate will probably fix it into something less awful, maybe, or not. But let's not worry too much, because the AHCA was not rushed through, not at all, no: 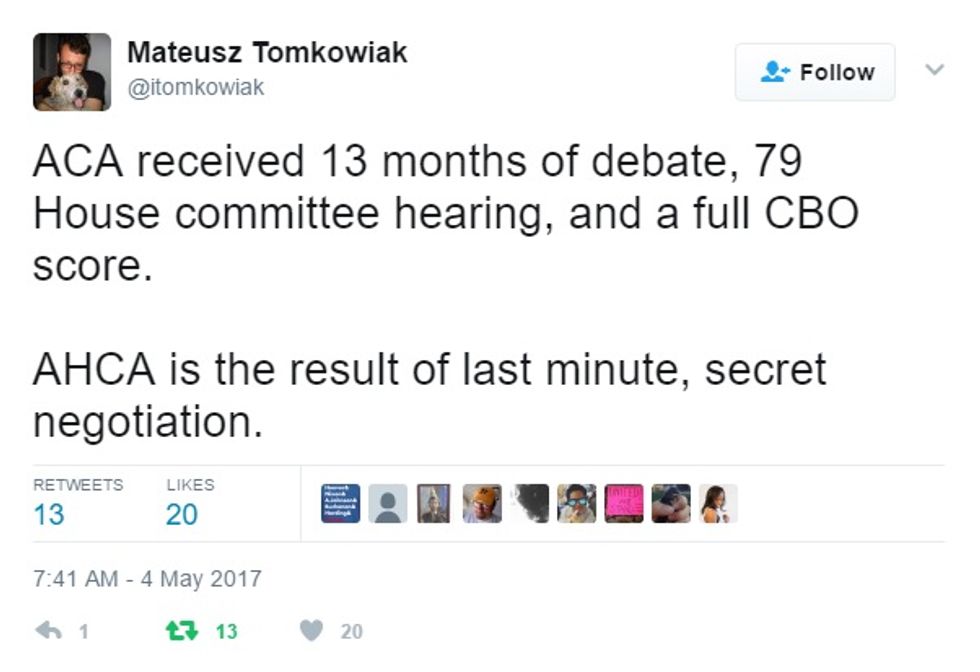 Devotion to terrible ideas is a preexisting condition for most House Republicans.

The debate and vote today is the result of a carefully planned process designed to achieve a key Republican goal: getting any goddamned thing passed and sent on to the Senate RIGHT NOW before the House recesses and spends 11 days on vacation, where constituents might have the chance to tell them what a complete clusterfuck this bill is, as well as all the ways it would make constituents die.

The House's day started with a pep rally led by the GOP leadership:

Leaders played the “Rocky” theme song as lawmakers walked into the meeting. Majority Leader Kevin McCarthy (R-Calif.) put an image of George S. Patton on the screen and read inspirational quotes from the general.

“Let’s get this f--king thing done!” Rep. Martha McSally (R-Ariz.) told her colleagues, according to sources in the room.

Now there's a representative who BELIEVES in the bill.

Now, there's not a lot that you can really say in 60 seconds about the subtleties of revamping a sixth of the economy, but here's a little observation several people have made on the Twitter Machine: The Democrats' comments on the bill were almost all about the effects of the Republicans' bill. It will raise costs, cut coverage, give states the option to eliminate essential health benefits and protections for patients with preexisting conditions, and in short, will leave tens of millions without healthcare so that tax cuts can be given to the already-rich. People will die.

Funny, though: Virtually no Republicans spoke in favor of what's in their bill. They've been saying all sorts of things about how terrible the ACA supposedly is, and how it's doomed, and how only immediate action to repeal the ACA can possibly prevent disaster. But apart from one or two empty promises that the AHCA really, REALLY will protect people with preexisting conditions (IT. WILL. NOT.), Republicans didn't have a hell of a lot to say in favor of their own damn bill. They'd rather not talk about it.

And they had to pass it today, because... well, they just had to. They certainly couldn't wait for the Congressional Budget office to score the bill, because that'll take forever -- at least until next week, maybe even the week after. And while the first version of the AHCA would have left at least 24 million Americans without insurance, the new version's option for red states to eliminate essential benefits and preexisting condition protections is nearly guaranteed to increase that number greatly -- and the CBO has already made clear it will not count junk insurance plans that don't cover essential services as "health insurance" at all.

In her closing remarks, Minority Leader Nancy Pelosi pointed out the dirty little secret of the AHCA: It's not a health care law, it's a tax cut law that'll cut $346 billion for the richest Americans over ten years while leaving almost everyone else with crappy healthcare. As to the fantastic compromise that'll supposedly offset the damage that'll be done to people with preexisting conditions, Pelosi quoted Robert Graboyes, of the conservative Mercatus Center, who said of the Upton amendment, "the $8 billion amount [to fund 'high-risk pools'] is a pittance. Spread over five years, it's a fifth of a pittance." [Update: this paragraph corrected with more accurate estimate of tax cut for wealthy]

Paul Ryan closed with a thoughtful discussion of what will be so great about this bill, which is that it repeals Obamacare, and that's the best he could say about it. Not a word about the specifics, just the same Republican crap we've heard about the ACA for years. Whoopee! And while the "debate" was rushed through, a Washington Post analysis confirmed what you all knew was coming: The pain of the new bill will fall primarily on red states, because they just hate Obama, and Trump voters will simply love losing their insurance and seeing their healthcare costs rise. They can always blame the blacks, after all.

Yr Wonkette is supported by reader donations, which pays for pretty good insurance through the exchanges. For now. Please click the "Donate" linky below!

Crawling Smear Of Paul Ryan Paul Ryans All Over Us Again