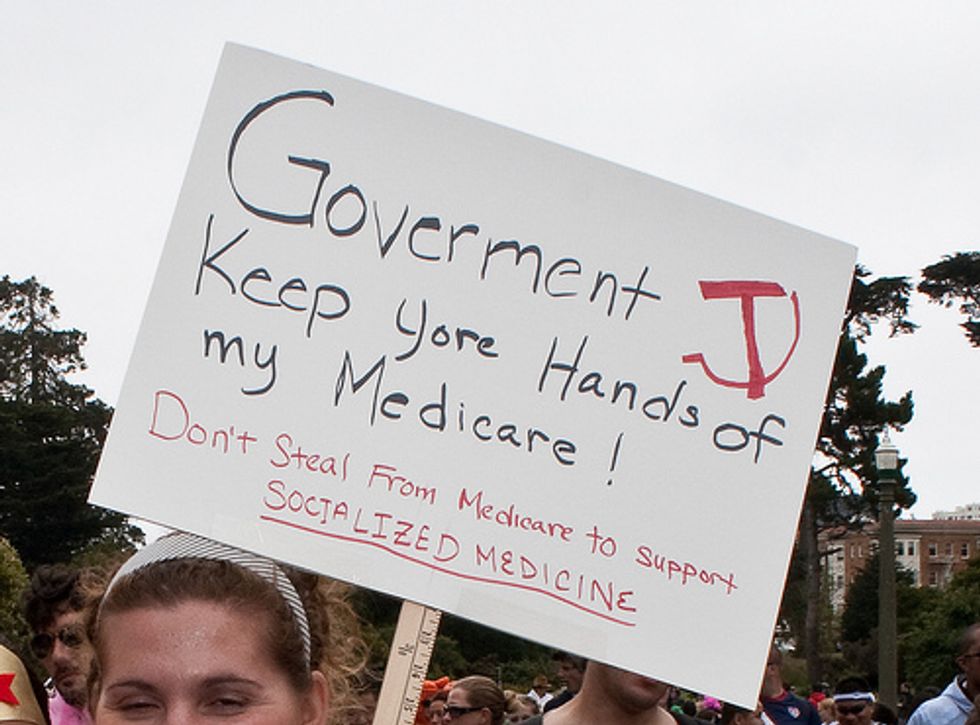 We didn't mention that during the campaign? Slipped my mind.

Now that the Republicans control the White House and Congress, Paul Ryan is raring to get busy on one of his favorite pet projects: "Phasing out" Medicare and replacing it with private insurance, since as everyone knows, private industry is better at everything, even when it isn't, actually. See, the big problem with Medicare is that nobody's making an obscene profit off it, and if something isn't making obscene profits, then how can it be good?

Ryan and his merry band of free marketeers have been hot to privatize Medicare forever, and now they've finally got everything they need to do it, Donald Trump's campaign promises to "protect Medicare" notwithstanding -- Republicans always frame their calls to kill off Medicare as a plan to "preserve" the program. This time around, Ryan has some terrific new lies about why we have to privatize Medicare: Obamacare done it, and so once Donald Trump repeals Obamacare, it's only logical that we have to kill Medicare, too. What, he didn't mention that was a twofer?

On Fox's "Special Report" Sunday, Ryan told host Bret Baier that even though "entitlement reform" hadn't really been part of Trump's campaign agenda, it certainly is now, isn't it? Might as well say it is!

Well, you have to remember, when Obamacare became Obamacare, Obamacare rewrote Medicare, rewrote Medicaid. If you are going to repeal and replace Obamacare, you have to address those issues as well. What a lot of folks don't realize is this 21-person board called the IPAP is about to kick in with price controls on Medicare. What people don't realize is because of Obamacare, Medicare is going broke, Medicare is going to have price controls because of Obamacare, Medicaid is in fiscal straits. You have to deal with those issues if you are going to repeal and replace Obamacare. Medicare has serious problems [because of] Obamacare. Those are part of our plan.

As Josh Marshall at TPM points out, this is a load of malarkey. Not only is Obamacare not making Medicare more expensive, it's actually extending the fiscal solvency of Medicare -- or so those wild-eyed socialists at Forbes say.

Privatizing Medicare is Paul Ryan's great white elephant, as he explains on his website, and now he thinks he's got a terrific chance to harpoon it at last. He wants to phase in subsidized private insurance to replace the government-run program that guarantees medical care for seniors now, and he's made no secret of it for years. As older recipients age and die off, newly covered Medicare recipients will have no choice but the privatized version:

For younger workers, when they become eligible, Medicare will provide a premium-support payment and a list of guaranteed coverage options -- including a traditional fee-for-service option -- from which recipients can choose a plan that best suits their needs.

Marshall translates that for us from the original Foggy Ryanese:

This means, if you haven't gone on Medicare yet, when you do, you won't get Medicare. You'll get a "premium-support payment" - i.e., a check that will allow you to buy insurance from private insurers. The "support" in the phrase means it won't cover the whole amount.

Notice what's not an option in Ryan's proposal? Medicare in its current form, which already has a lower overhead than private insurance, and could be made even more efficient if Medicare were allowed to negotiate drug prices with pharmaceutical companies. Hillary Clinton was in favor of that reform, but forget her, she deleted emails, so thank god, now people in their 40s and 50s can look forward to no more Medicare when they retire! But they can keep paying for insurance -- with a little subsidy, which can be reduced periodically as needed, to "save" the program again.

Now it really is time for angry teabaggers to start demanding the government keep its filthy hands off their Medicare. Here's hoping the AARP can mobilize the pissed-off seniors to fight this -- they've usually nipped this sort of nonsense in the bud.

In other news, NOAA climate scientists warn Ryan's plan for Social Security reform may be unfeasible, since there may not be enough ice floes left to implement it.