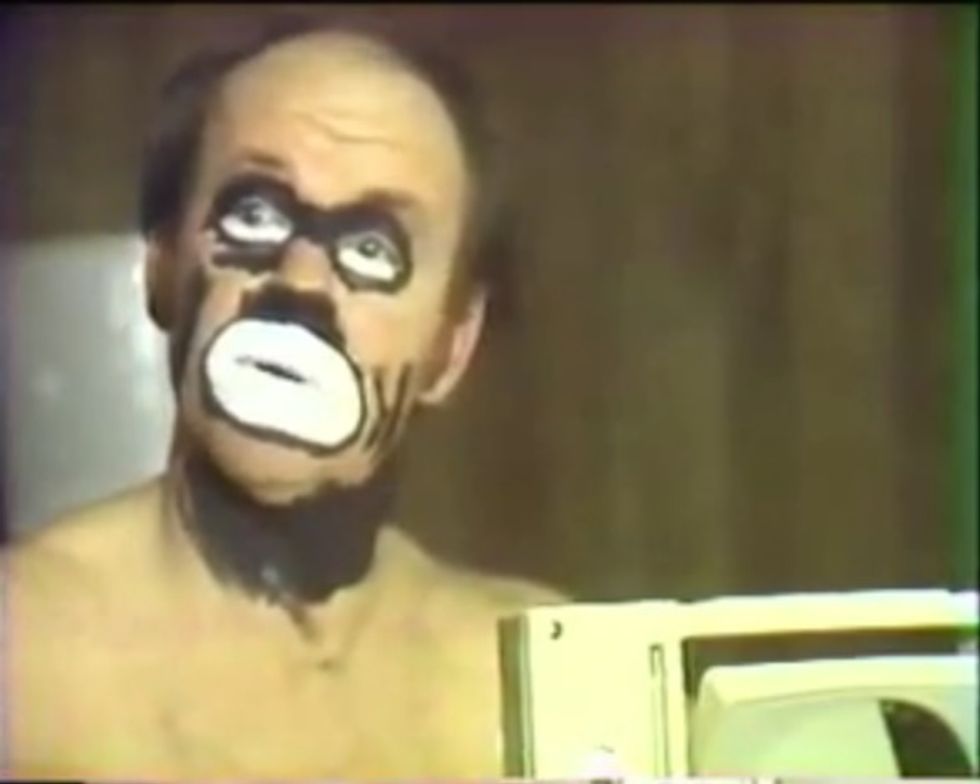 Let's say you want to raise some money to defend the six Baltimore cops charged with the murder of Freddie Gray. They can't do a GoFundMe, because GoFundMe is racist against criminal defense fundraising, so how about a concert? What's the worst possible act you could book? (OK, the second worst, seeing as how you couldn't afford to get Nickelback.) How about a guy who performs in blackface?

Yes, that was the plan -- until the whole thing fell apart in a torrent of negative publicity. A guy named Bobby Berger was organizing a big fundraiser for the defense fund of the accused cops. Berger, a former cop himself, specializes in performing as Al Jolson, blackface and all, but insists that there's nothing racial about it, since it's merely an homage to one of the twentieth century's great entertainers. Who performed in minstrel-show blackface, sure, but Jolson was Jewish, so isn't this controversy really all about anti-Semitism? After the predictable outrage blew up, the venue cancelled the show, but who knows, maybe Berger will find another location and it'll be a triumphant success, just like in the Blues Brothers, if Jake And Elwood had been mocking black entertainers instead of showcasing them.

The Baltimore City Paper tells us more about the squicky career of Bobby Berger, who is so poorly understood:

Berger was once known as the city's "singing cop" for his performances in musical reviews, including renditions of Al Jolson routines done in blackface, according to an article in The Sun. The concerts got him into trouble with the department in 1982, which eventually led to police brass asking him to stop. Berger sued on First Amendment grounds, backed by the ACLU. He lost and was fired in 1984, but a federal appeals court later ruled in his favor.

Berger rejoined BPD in 1986, without a gun or badge, and was told to "relax and accept being paid for nothing." He again filed suit and won a $200,000 decision that also granted him full retirement benefits.

Heck, Berger told Ebony editor Jamilah Lemieux, who broke the story, there's nothing offensive at all about his completely non-racist act, which he's performed on the Montel Williams show and also performed for Joe Frazier, and did you know that they are both black people?

And yet, in a real shocker that no one could have seen coming unless they were psychic or had a clue, a lot of people found the plan for a blackface fundraiser for cops accused of killing a black man offensive somehow, which just proves that political correctness has gotten completely out of control. Somehow, the venue, Michael’s Eighth Avenue, was caught off guard by all the negativity, but it promptly discovered that it isn't actually in favor of blackface performances, what with the whole decline of minstrel shows since the death of vaudeville sometime in the last century. On its Facebook page, Michaels announced that it wouldn't be hosting the event after all, because it suddenly discovered that Berger's act might be seen as problematic:

No contract was signed with Mr. Berger. Michael’s does not condone blackface performances of any kind. As an event venue, it has not been the practice of Michael’s Eighth Avenue to pre-approve entertainment that is planned as part of a contracted event. This policy will be carefully and thoughtfully reviewed.

Not that the cops were necessarily too thrilled about the prospects of the fundraiser either; the Baltimore Sun notes that, in a rare moment of agreement, the police union and the NAACP condemned the performance, as did an attorney for one of the accused police officers:

"My client will not participate. We will not accept a single solitary dime from this sort of action," Bates said before the show was canceled. "This is the type of racist behavior that we do not need and do not want."

It's not clear whether Berger will seek another venue. Perhaps, to help fight the politically correct forces that are trying to silence him, he could get some help with that gun shop owner in Florida who says America is at war with political correctness. He could probably contribute a nice Confederate-flag backdrop for whatever stage Berger finds.