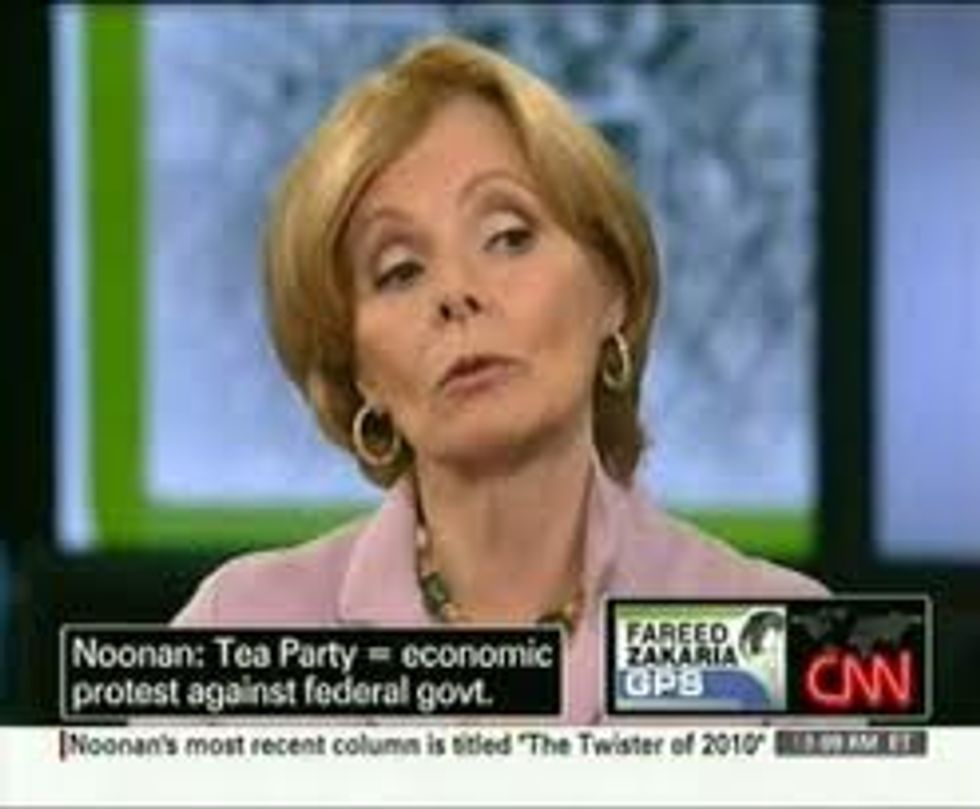 Late on a stormy night, Sister Margaret Ellen Noonan wandered, brooding, along the long hallway she called the “Hall of Heroes” in her proper Republicanpied-à-terre high above Manhattan. The portraits on the walls, oil paintings of dour old white men in three-piece suits, glowered at her. All the great Republicans were here: Reagan, of course, but also Ike and Coolidge and Teddy Roosevelt with his walrus moustache. Thunder crashed outside, and lightning flashing at the windows gave her heroes’ feral eyes a masculine cast. Oh, these were men, all right! Great men, colossi, who once strode the purple mountains majesty and the amber waves of grain!

And where had they all gone, these great leaders? For Sister Margaret was troubled. Her precious Republican Party was now led by loudmouths and louts, grifters and gombeens. Hacks of weak character like John Boehner. Mulatto Canadians like Ted Cruz. And the two wings of the GOP represented by these two men, the proper Establishment and the rabid Tea Party, were at each other’s throats. Where was the person who could act as conciliator? Where was the unifying spirit?

Then Sister Margaret stopped in front of the portrait of Robert Taft, issue of hearty Midwestern soil, named by a Senate committee as one of the five greatest senators of all time (sure that had been in 1957, and sure that list had also included John C. Calhoun but never mind that). Sister Margaret uncorked the medicine bottle of ether, gripped in her fist like a Titanic passenger clinging to a life preserver, and inhaled. She cried out her questions to the portrait of Robert Taft. And soon, the great man answered.

Why did they call you "Mr. Republican"?

"Well, I suppose in part because I never bolted the party, and, in spite of what were probably some provocations on my part, no one managed to throw me out either. But I felt loyalty to the GOP as a great institution, one that historically stood for the dignity of the individual versus the massed forces of other spheres, such as government.”

Peggy has decided to do her best Maureen Dowd impression this week, putting herself inside the head of a dead Republican from Ohio. In MoDo’s case it was John Boehner, but what’s the difference.

"Both sides have something to admit. The GOP will not be a victorious national party in the future without the tea party. The tea party needs the infrastructure, tradition, capabilities—the car—in order to function as a fully coherent and effective national entity." He feels more sympathy toward the tea party than the establishment. "Their policy aims, while somewhat inchoate, seem on the right track.”

Somewhat inchoate? This is Republican elder weasel-speak for “You are a bunch of fucking loons who couldn’t string a sentence together if we spotted you the subject, the verb, and the punctuation. But you’re all we’ve got, so wash your hands and sit up straight and we’ll let you eat at the adult table.”

The tea party, in contrast, seems to him to be "trying to stand for a free citizenry in the age of Lois Lerner.”

"The tea party should stop the insults -- 'RINO,' 'sellout,' 'surrender caucus.' It's undignified, and it's not worthy of a serious movement."

Why, Taft sounds like one of those squishes Ted Cruz warned us about. RINO!

They should remove the chip from their shoulder. "Stop acting like Little Suzie with her nose pressed against the window watching the fancy people at the party. You've arrived and you know it. Forget the obsession with Georgetown cocktail parties.”

You know what we bet will really change the minds of the teabaggers? Etiquette lessons from the proprietress of Peggy Noonan’s Finishing School for Uncouth Ruffians and Flibbertigibbets. And Peggy sneers at Barack Obama for lecturing people.

Most important? "I don't like saying this but be less gullible. Many of your instincts are right but politics is drowning in money. A lot of it is spent trying to manipulate you, by people who claim to be sincere, who say they're the only honest guy in the room. Don't be the fool of radio stars who rev you up for a living. They're doing it for ratings. Stop being taken in by senators who fund-raise off your anger.”

We like how Peggy has presented two sides of the Republican Party -- the Establishment and the Tea Party -- and then placed herself outside of the dynamic, as if she’s not Establishment from the withered husks of her salon-dried hair to the delicate soles of her sensibly clad feet, while lecturing the teabaggers to pretty please not be teabaggers. Peggy, leopard, spots, et cetera.

Ted Cruz? Here Taft paused. "That fellow is a little self-propelled." Another pause. "We had a saying, 'Give him time and space to fall on his face.'" Others with him on the Hill, however, are "good, smart, intend to make America better, and will be a big part of the future."

Telling the Tea Party to repudiate Ted Cruz, their greatest hero, at the height of his popularity. That will go over well. Sit down, Peggy.

His speech over (or maybe the ether having just worn off), Mr. Republican returned to being an inanimate mélange of oil slapped on a canvas. Sister Margaret stood in her Hall of Heroes, mouth agape, a solitary thread of spittle leaking from her lower lip to plunge groundward from her chin. The rain had stopped. She had a column to write. Outside her window, the sun shone down on a beautiful day.