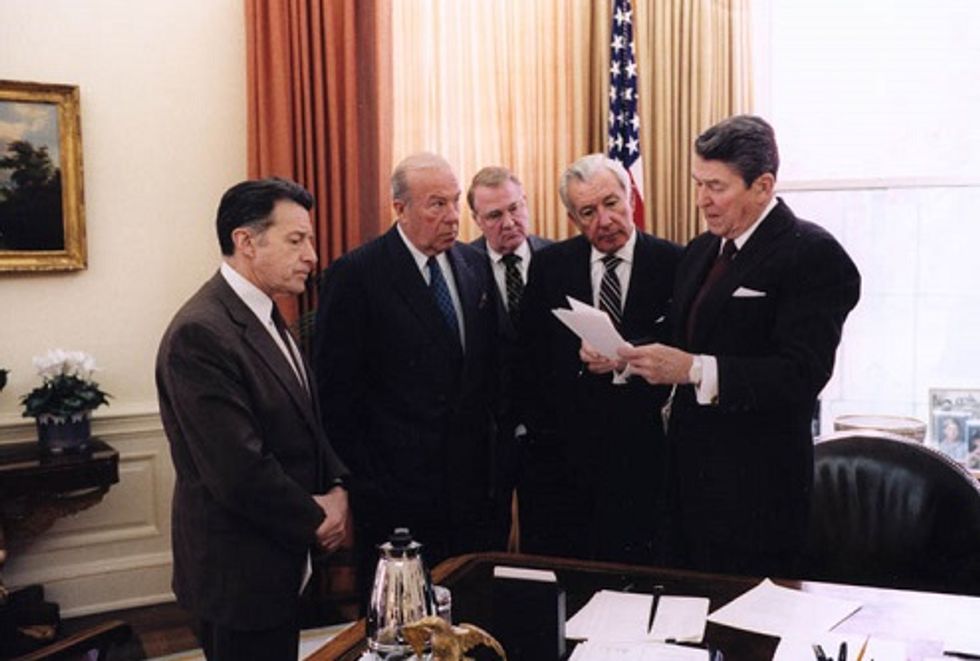 Ah, New York! She had missed it so, had Sister Peggy Noonan of Our Lady of the Joyless Orgasm. The trip to Rome had been just the tonic she needed, a break from the grind of noise and chaos and dodging over-aggressive Uber drivers that made up her life in the City That Never Sleeps. Now she was home, snug in her sitting-parlor with the slip-covered sofa and the wet bar, ready for whatever skullduggery the blackguard in the Oval Office planned to inflict on her beloved America this week.

Her copy of the Wall Street Journal, fetched from the building’s stoop by her man-servant, lay on the sideboard. Peggy glanced at the front page and nearly spit a mouthful of martini onto the paper. Benghazi! Tres scandal! She scanned the story. An email! Talking points written! Information possibly massaged by public relations people to make a situation sound less awful! The American people, specifically its inexhaustible supply of AM talk-radio hosts, would need answers immediately. Peggy, having known political scandal in her time, thought surely she had a perspective to lend.

Democrats will argue — they already are — that with the country in crisis the attention of Congress should be turned to addressing the issue that weighs most on the public mind: a bad economy with the very top flourishing while the middle is stuck, stressed and sinking.

Which you were arguing they should have been working on instead of passing Obamacare. So we know which issue Peggy suddenly finds most important.

That will not be a wholly effective line for Democrats. Their and the president's inability to work legislatively with Republicans the past 5½ years has left the American people understanding that nothing's going to get done in the immediate future anyway. Benghazi isn't distracting Congress because they're not doing anything.

Yep, all the Democrats’ fault despite the GOP controlling the House since 2010 and effectively gumming up the Senate since the day Obama came into office. Peggy is drinking the wingnut Kool-Aid. They must have put some gin in it.

Network leaders, producers and newspaper editors did not go after the story when the first serious questions began to bubble up. Afterward they dismissed the questions as old news. Now they are defensive and resentful. They are not going to help Republican investigators do the job they themselves should have done. (If they'd done it there might be no need for another investigation, because people might feel satisfied they know the essential facts.)

Unless they had found nothing, in which case the wingnuts would still be howling about media bias and demanding a Republican-led investigation by Congress. Come on Peggy, this is basic stuff.

If they act unseriously and cynically, the American people, to the extent they're watching, will turn off. In the end that would produce a GOP humiliation. More importantly, what happened at Benghazi wouldn't be found out.

Sure, if we don’t read the dozen reports and thousands of pages of testimony Congress has already produced, we might never know what happened in Benghazi. Thank God for this new committee.

We are about to find out if Republican congressmen can be mature.

It happened eight weeks before the 2012 presidential election. From day one White House management and leadership focused on spin and an apparent fiction. Did they deliberately mislead and misdirect? Why was there no military response? Who is responsible?

Oooo, we know, call on us! Okay, 1) No. The White House, along with the intelligence community, thought the cause of the attack was x. Turned out to be y. Everyone has long admitted they were wrong on that one. 2) This has been answered.Thoroughly. 3) Al Qaeda-associated militants, we guess, since you just said that a couple of sentences ago.

As always, Peggy’s column was apparently written in a parallel universe and shipped to our reality via wormhole. It’s the only explanation that makes sense.

The first half of this column was so classic we’re not sure we can read the second half, when Peggy will explain the Iran-Contra scandal to us as if it were a minor incident instead of a Constitution-subverting criminal enterprise run by a bunch of guys who shouldn’t have been running so much as a soft-serve machine at the local Arby’s.

The Iran-Contra affair did not spring from low motives. There was no hope of partisan gain, it wasn't a political play.

We are sure there was no interest in Reagan being the hero who got the hostages held by Hezbollah released, and there was nothing political about funneling the profits from the arms sales to a bunch of right-wing rebels fighting communists in Central America even though the Democratic-controlled Congress specifically forbade it. With laws and everything.

All involved were trying — sometimes stupidly, almost childishly — to save lives, and perhaps establish a new opening with Iran. They had good reasons, but the actions were bad, and everyone involved paid a price.

You might wonder what lives Oliver North was trying to "save" by selling missiles to the people who took 52 Americans hostage for 444 days, and you will keep wondering. And who can forget the price paid by all those figures in Iran-Contra, and by paid we mean the suspended sentences and probation instead of genuine prison time they received before George H.W. Bush pardoned everyone anyway on his way out the door in 1992?

Compare that with how the Obama White House has handled Benghazi. It's all been spin, close ranks, point fingers, obfuscate, withhold documents, accuse your accusers of base motives. Nobody in the administration has paid a price.

Also no one has been found to have committed a crime even after thousands of hours of investigation and testimony. But what’s important is that the wingnuts get a scalp whether there was criminal activity or not, right?

No, Benghazi was no Iran-Contra, in terms of the nature of the crime or the handling of it.

Dude, that's how patriots, not punks, deal with scandals.

Dude, patriots don’t knowingly violate the law with impunity in the first place. Then there is no scandal to begin with.

Yuck. Join us next week when Peggy will argue that Richard Nixon was genuinely concerned about Daniel Ellsberg's mental health and just wanted to help him get top-notch psychiatric care.