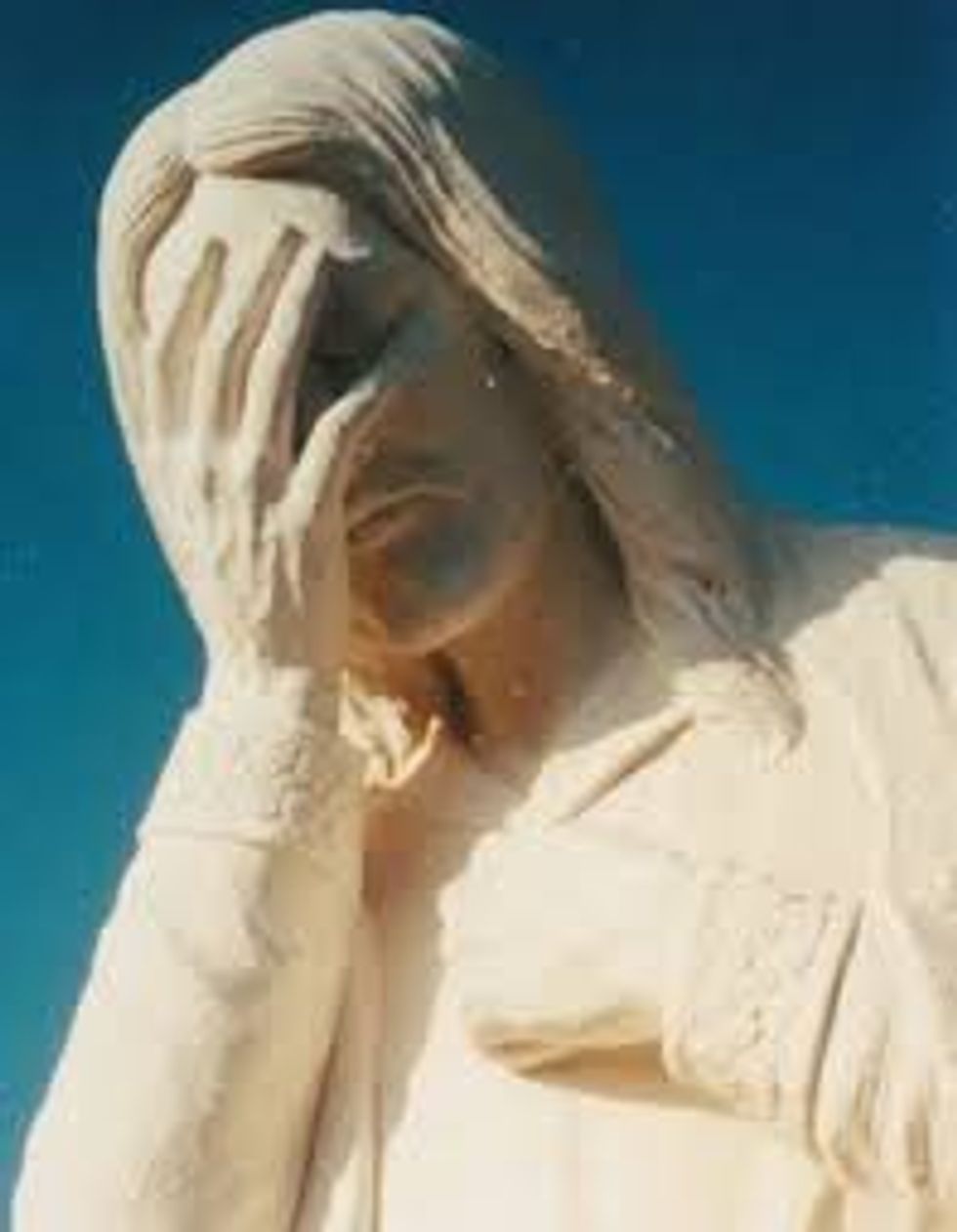 In the dark of a cold winter night in Manhattan, in herpricey three-bedroom condo high above the Christmas-light-festooned streets of the Upper East Side bustling with harried and wealthy stockbrokers and their families hurrying home laden down with full shopping bags from Bergdorf and Saks, Muzak versions of “Little Drummer Boy” pouring forth from the lighted doorways of every shop and tea house, Margaret Ellen Noonan, beloved Sister of the Order of Saint Francis of Spirits and Libations, was deep into the last bottle of cooking sherry. It was a fine sherry, too good to be wasted on poaching a piece of fish, and besides, Peggy needed to settle down. She had been nervous lately, her sleep lashed by horrific dreams of mushroom clouds rising above the Eiffel Tower because the Negro in the White House had put Inspector Clouseau in charge of the nuclear launch codes. A snatch of poetry in her head: Behold! The Night Mare! Yeats? It sounded like Yeats. A good Irish boy who knew the value of words, and also a tax code beneficial to the wealthy, probably.

Words. She kept circling back to that thought. She had heard so many the preceding year! People are always speaking words, which is how one knows that words are important. “Can you do This Week on Sunday?” “Our special this evening is a filleted sole with butternut squash.” “Mrs. Noonan, don’t you think you’ve had enough?” So many words, with so many meanings. She would write about them for her column. She would write words about words!

The sentence of the year is very famous. "If you like your health-care plan, you can keep it," which President Obama promised from beginning of his health bill straight through to the time before its unveiling. It was a lie and has been called lie of the year.

We think President Obama handled this issue badly, but let’s be honest: only a simpleton would think that a law that made significant changes to an industry encompassing one-sixth of the nation’s economy would not also result in some serious upheavals. Since we’re a nation of simpletons, the statement became a lie. But we’ve been wondering since 2008 how long it would be before Obama began a State of the Union by gripping both sides of the podium until his arms shook before looking into the camera and roaring, “Just how fucking dumb are you people?” He probably never will, though. Another broken promise, thanks Obama!

Mr. Obama has never had a famous phrase that encapsulated his leadership…Could he get himself a new and happier one? Yes. Something like, "Stubbornness is never a good grounding for policy. Today I am ordering the federal government to delay implementation of ObamaCare for one year…I am frankly asking for constructive cooperation from my Republican friends. It would be a most unkind party that wouldn't pitch in at a moment like this."

This was the point where we almost stopped reading this goddamn thing lest we fly into a rage and run out into the streets of Los Angeles naked, screaming gibberish, ready to gnaw through the trunk of the nearest palm tree until it fell on us and popped our noggin like a grape. Constructive cooperation from the Republicans? How the fuck is this woman paid obscene amounts of money to write about politics when she has apparently not so much as read a newspaper or magazine or even a political mommyblog in five years? This is the most tone-deaf, ridiculous sentence Peggy has ever written, and we remind you she recently wrote an entire column in which she imagined Robert Taft giving the Tea Party advice.

Actually we don't talk much about health care, we talk about health insurance. Fox News's Jim Pinkerton says the absent words in the ongoing debate are "medicine," "research" and "cure." Do you want to make a dent in future health-care costs? Cure Alzheimers. That's where the cost will be as the health of the baby boomers falters. Insurance isn't the key. It was never the key. It's a product. Cure and care are the words of the future.

Alzheimer's. Hmmm, why would that be important to Peggy? It would be nice if we could cure all sorts of diseases, and if the austerity fetishists ever get voted out of Congress maybe we’ll get to fund the NIH again. Here’s a thought, Peggy: try writing a column about why some government spending might be good and important, and funding it might require a few tax increases here and there. Would it be asking too much of a highly-paid columnist to connect a few dots? Don’t answer that.

There aren't really a lot of nice things about flying. It's scary, germy, full of delays. They don't clean the planes as they once did—the tray is not clean and as you open it and see the coke and coffee marks, you wonder if it was used on the last flight by a Senegalese tourist with typhus.

And the planes only go to Pittsburgh, where the hotels are terrible. Sorry the overworked, underpaid airline employees aren’t keeping things up to your standards, Howard Hughes. Here’s an extra bag of peanuts. How did we get from Alzheimers to the state of the airline industry, anyway? Wormhole? We’re going with wormhole.

A billionaire of New York, in conversation: "I hate it when the market goes up. Every time I hear the stock market went up I know the guillotines are coming closer."

All right, who forgot to oil the wheels on the guillotine? Was it Fred? Dammit Fred, you had one job…

They are worried. They are right to be. They are trying to think it through, trying to find any realistic solutions, and words.

This from the woman who always complains that the president is a lot better at speaking than governing. Peggy, we do not for one goddamn second believe the wealthy people you talk to are concerned about income inequality, no matter how many hundreds of millions of dollars they claim to have given away, mostly to have buildings at Harvard named after them. These people you are telling us are worried and want to find solutions are the same ones who donate money to politicians who will work to keep the tax code structured in their favor, whose companies hire armies of lobbyists to agitate for their own narrow interests at the expense of 99% of the population, who have benefited from forty years of policies that have led to this economic imbalance in the first place. Now they are seeing the results and you tell us they are worried? We’ll believe it when Jamie Dimon starts stumping for Elizabeth Warren and conservatives stop accusing Bill DeBlasio of being the second coming of Chairman Mao.