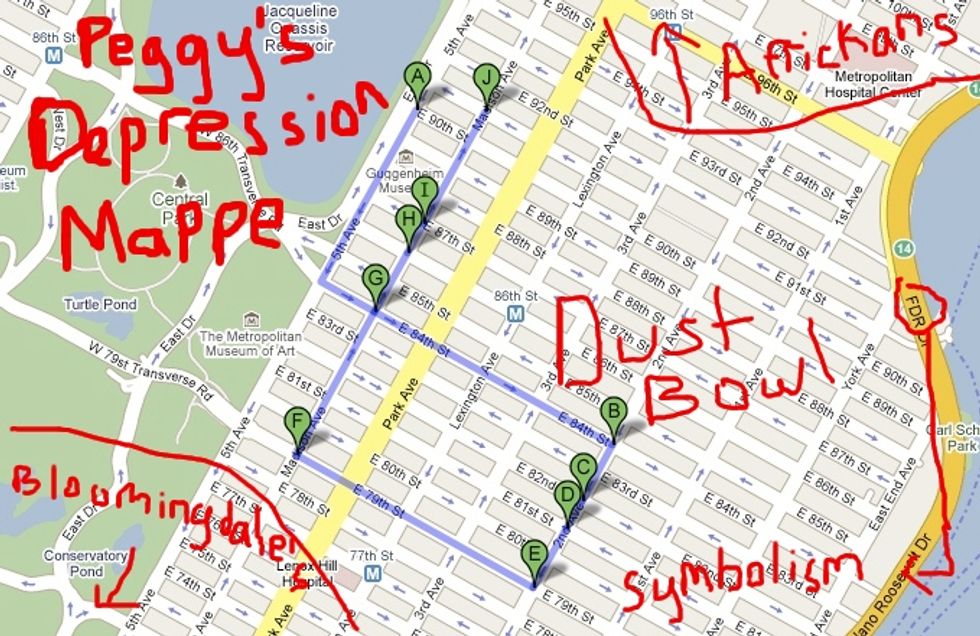 Oh heavens, Madame Peggy Noonan, princess of the Wall Street Journal banking pamphlet, has journeyed outside her loft again: "A moment last Monday, just after noon, in Manhattan. It's slightly overcast, not cold, a good day for walking. I'm in the 90s on Fifth heading south, enjoying the broad avenue, the trees, the wide cobblestone walkway that rings Central Park. Suddenly I realize: Something's odd here."

You may remember Peggy's important Thanksgiving 2008 column in which she described another day when she left her loft, wandered around the Upper East Side, saw a few things, and made sweeping generalizations about the state of the American economy:

I am thankful for something we’re not seeing. One of the weirdest, most perceptually jarring things about the economic crisis is that everything looks the same. We are told every day and in every news venue that we are in Great Depression II, that we are in a crisis, a cataclysm, a meltdown, the credit crunch from hell, that we will lose millions of jobs, and that the great abundance is over and may never return. Three great investment banks have fallen while a fourth totters, and the Dow Jones Industrial Average has fallen 31% in six months. And yet when you free yourself from media and go outside for a walk, everything looks . . . the same.

She had expected, with a sort of bittersweet curiosity, to discover various stereotypical, '30s-era hobo anachronisms transplanted into her neighborhood, fighting over chunks of rubber for the noble purpose of chewing: "In the Depression people sold apples on the street. They sold pencils. Angels with dirty faces wore coats too thin and short and shivered in line at the government surplus warehouse." She saw none of these things, sadly. She did not even see a Mexican.

On her most recent perambulations, however -- as documented in today's stark edition of "Declarations" -- she discovered that indeed, there is an actual economic Depression, at least within a 36-square-block portion of the Upper East Side in Manhattan:

Something's strange. It's quiet. I can hear each car go by. The traffic's not an indistinct roar. The sidewalks aren't full, as they normally are. It's like a holiday, but it's not, it's the middle of a business day in February. I thought back to two weeks before when a friend and I zoomed down Park Avenue at evening rush hour in what should have been bumper-to-bumper traffic.

The Earth speaks to Peggy Noonan in such subtleties.

At last, the thrust of the piece: "If you want to feel the bruise of what's happened, pick a neighborhood full of shops and go up and down the street." She, for example, will arbitrarily select to study the Upper East Side. Starting from her initial observation on Fifth Avenue in the 90s, we stroll east to the impoverished Second Avenue.

Her view of the nation's economic status most likely changed from "thriving" to "Endless Depression" at the specific moment she noticed that Talbot's was closed. She just wanted to go shopping at Talbot's. Is that asking so much?