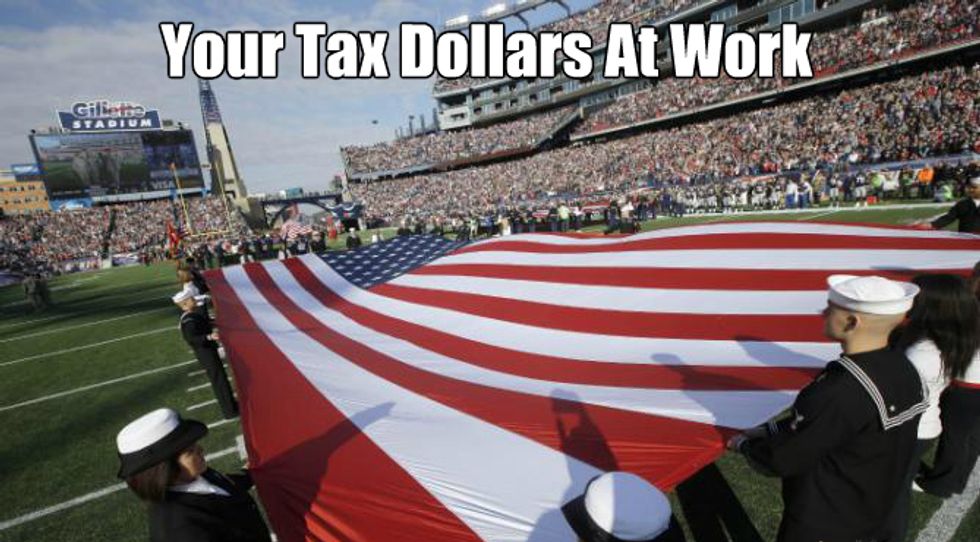 The giant flags are a bargain compared to the jets, of course

Terrific news! You'll be delighted to know the Pentagon doesn't always waste its massive budget on dumb war stuff. Sometimes it wastes parts of it on dumb sportsball stuff, too: roughly $6.8 million to pay for exciting patriotic displays during pro sports games, including football-field sized American flags, "tributes" to veterans, sponsored performances of "God Bless America," and most likely, abortions for some, miniature American flags for others. And you thought the government spent too much money for shrimp to run on little treadmills!

Arizona Senators John McCain and Jeff Flake released a spiffy report Wednesday detailing the Pentagon's many contracts over four years with professional sportsball leagues, decrying the spending as "paid patriotism" that the Pentagon justified as a cost of "recruiting," although there's little evidence the displays actually motivated anyone to go sign up. It's a very pretty report, with team-by-team breakdowns of the spending and a genuinely impressive cover, which we're sure was prepared by the lowest bidder, or maybe, we hope, a bright intern:

Propaganda sure has changed. Can you imagine a government report using an image of Uncle Sam getting tackled in 1944?

In a news conference held to publicize the report, Sen. Flake had a sad about how the wasteful spending actually cheapened real patriotism, which is still a good thing:

What is upsetting is when you see activities like this that people assume when they go to games are paid for out of the goodness of the heart by the owners and the teams, and then to find out the taxpayers are paying for it. It kind of cheapens (it) and it’s simply not right[.]

Buttloads of money went to NFL teams, since F'ball is obviously America's most patriotic sport. As George Will said last time he was funny, it combines the two worst aspects of American life: It's violence punctuated by business meetings. USA Today has some details:

The Atlanta contracts included a 2013 event during which a roaring crowd cheered as the Falcons welcomed 80 guard members who unfurled an American flag across the Georgia Dome’s turf.

You almost have to feel sad for the poor ol' Cleveland Browns, who had to make do with a $10,000 contract for a single color guard ceremony in 2012.

NPR notes that the Pentagon has since discontinued the practices, so now we can at least be sure our military dollars are going to worthy projects like bombing hospitals in Afghanistan (oops!) and other priorities.

In the meantime, you'll be glad to know that, seven years after the "shrimp treadmill" first became a rightwing symbol of government waste, Fox News is still screaming about the "millions" of dollars spent on it. On Fox's Outnumbered Monday, Andrea Tantaros explained why we simply can't afford paid family leave: It's those damn shrimp!

Everything that progressives push for sounds great in theory but there's always the question of who is going to pay for it ... So, again, the road to Hell is always paved with good intentions. But Sandra, we covered this topic earlier, we're bankrupt as a nation. Maybe take the shrimp off the treadmill. Stop funding those stupid studies we're funding. Stop funding all these other programs and prioritize if this is something that's important to the American people.

Or maybe stop spending millions on big flags at F'ball games? Hey, if we cut a few hundred thousand dollars from oversight, maybe we wouldn't have to even know about upsetting government waste!

[contextly_sidebar id="NstAuD02irA9SFKeoWWzPWJS8x5EXpay"]Fact-check reminder: the actual cost of the little treadmill was more like $47, it was one item in an environmental study with a budget of $500,000, and the real goal of the study was to assess the effect of pollution on marine life, which is sort of a big deal to a country with a fishing industry. The total cost of that study -- which, one more time, was not about exercising shrimp -- came to less than what the Pentagon gave in two years to the Baltimore Ravens ($534,500) to make football fans feel excited about America.

We're looking forward to Fox's reporting on the McCain-Flake report -- they'll probably condemn the senators for cutting off the funding spigot to pay for Air National Guard flyovers at F'ball games.