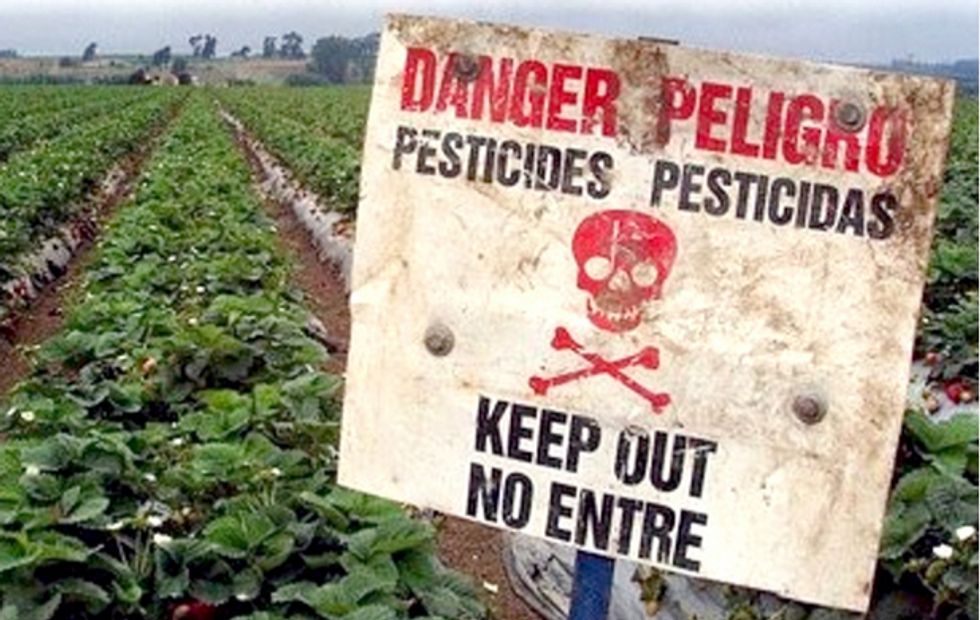 If you're in the next field over, there's no sign...

It was great news for Dow Chemical when Donald Trump signed that executive order in February calling for a steep reduction in federal regulations, which kill jobs and are terrible for the economy. Trump was so proud of the EO and how happy and prosperous it would make all Americans that he surrounded himself with CEOs and handed the pen to Andrew Liveris, the CEO of Dow (just past the 5-minute mark here):

In late April, just to make it clear he cares about the health of America's Corporate Persons, if not any actual human beings, EPA administrator Scott Pruitt ignored the EPA's own scientists and reversed the agency's plan to ban agricultural use of chlorpyrifos, a very nasty pesticide produced by Dow AgroSciences. The stuff was already banned for home use in 2000, but was still legal for agriculture; Obama's EPA had started the process of banning its use in the U.S. altogether. As Mother Jones notes, chlorpyrifos is some pretty nasty stuff:

It's an organophosphate, a class of bug killers that work by "interrupting the electrochemical processes that nerves use to communicate with muscles and other nerves," as the Pesticide Encyclopedia puts it. Chlorpyrifos is also an endocrine disrupter, meaning it can cause "adverse developmental, reproductive, neurological, and immune effects," according to the National Institutes of Health.

Major studies from the Mount Sinai School of Medicine, the University of California-Davis, and Columbia University have found strong evidence that low doses of chlorpyrifos inhibits kids' brain development, including when exposure occurs in the womb, with effects ranging from lower IQ to higher rates of autism.

And yes, studies found it in the urine of children living near farm fields, which is why smart parents aren't so poor they have to live near ag operations.

On the other hand, banning the chemical would have been very bad for Dow AgroSciences, so Pruitt signed off on keeping the stuff legal. So it was a huge surprise to nobody that more than 50 farm workers were exposed to the stuff a couple of weeks ago when it drifted over from a nearby field that had been sprayed; 12 were treated for poisoning, and had symptoms like vomiting and nausea; one person fainted. One person was taken to the hospital, and a dozen of the workers had no symptoms.

Oh, yes, and there's this chilling line which goes without further comment in the KGET TV news report: "However more than half of the farm workers left before medical aid arrived." So there's the New Cruelty working from multiple directions: Legalize poisons that scientists said should be banned, and make sure that migrant workers are so frightened of La Migra that they'd risk chemical poisoning instead of getting treated and then met by ICE officers at the ER. America truly is great again, isn't it?

Side effects of exposure may also include deportation, so weigh your options carefully.

The TV report cited a supervisor at the farm where the workers were poisoned, who said a neighboring farm had been sprayed the previous night with an insecticide called Vulcan, whose active ingredient is chlorpyrifos. Mother Jones reported yesterday that while the Kern County Public Health Department therefore assumes chlorpyrifos is the chemical at work in the poisoning, the county's Department of Agriculture and Measurement Standards was still investigating, and that tests to definitively identify the chemical that made the workers sick would take at least a week.

In the meantime, Donald Trump and Dow CEO Andrew Liveris continue to be great pals. Before taking office, Trump announced Liveris would head the American Manufacturing Council, the main private sector advisory committee for the Secretary of Commerce. Then in February, just before Trump issued the Executive Order calling for broad deregulation, Liveris gushed that Trump's administration just might be "the most pro-business administration since the Founding Fathers. There is no question that the language of business is occurring here at the White House." It's a beautiful partnership, and neither man has children who live near a farm that's spraying its fields with chlorpyrifos.

Considering how sad Donald Trump got about seeing the poor poisoned children of Syria, maybe the only hope for getting this crap off the market is to wait for another accident -- there will be one -- and hope the suffering is sufficiently photogenic to make it to cable news.

But that probably won't happen (the poisoning will, Trump caring about it won't), and besides, lots of the people who are likely to be affected by this nightmare chemical are here illegally. Maybe it'll be a good incentive for them to self-deport! Say, you know who else used a poisonous insecticide to get rid of a disfavored group of people?

Yr Wonkette is supported by reader contributions. As of now, we only drink distilled water and grain alcohol. If you thought this article was worth reading, please click the "Donate" linky and we'll make more!