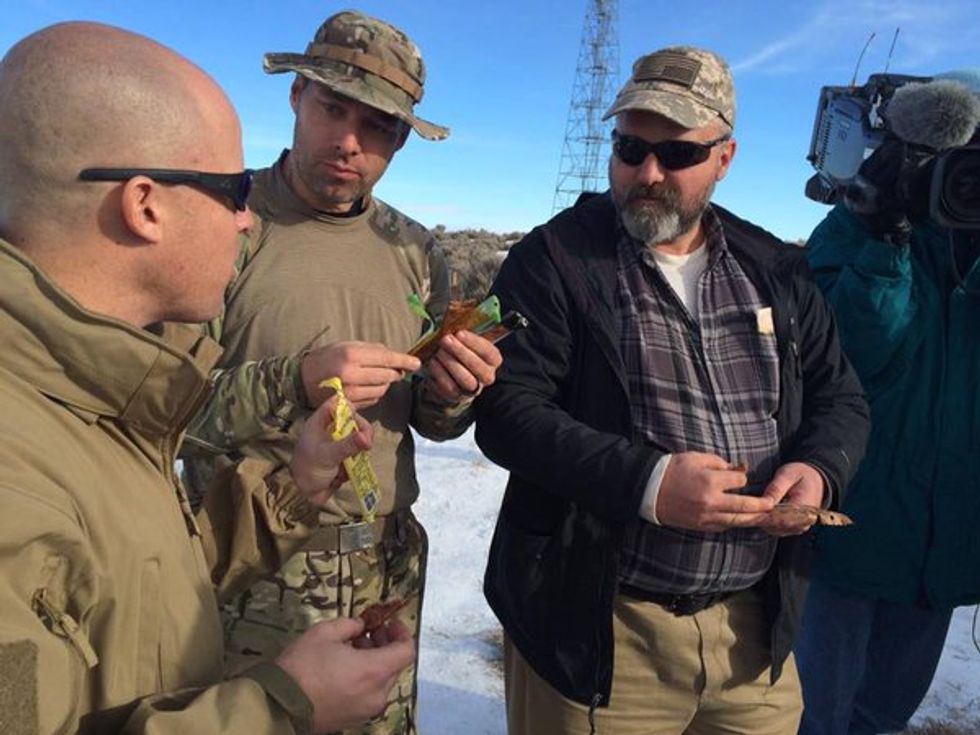 We're sure that's exactly what the "peaceful protestors" had in mind when they sent out the call for snacks.

[contextly_sidebar id="f3s1OYbv1uqt2AcW1I1uF4hGUppA1ocK"]Anyway, after the cunning wilderness experts revealed that WHOOPS, they forgot to bring provisions with them to Sleepaway Bird Camp, PETA responded by delivering some vegan jerky, coupled with a healthy dose of the smug condescension, which remains their sole contribution to American discourse:

The militant cattle ranchers currently occupying Malheur National Wildlife Refuge have appealed for snacks, and PETA is answering the call with a hand-delivered package of vegan jerky that contains more protein than beef does. The PETA staffers, who will bear signs reading, “The End (of Animal Agriculture) Is Nigh: Get Out Now!” are suggesting that militia members learn to raise crops, not cows—allowing the many species of wild animals the refuge was designed to protect to thrive.

“People from all walks of life are increasingly appalled by the idea of slaughtering animals and realize, too, the harmful impact that animal agriculture has on the environment, so it’s time to face facts,” says PETA President Ingrid Newkirk. “These ranchers may have a beef with the feds, but their water use and the cattle’s production of methane mean that the world needs them to get out of the beef business.”

It's important not to overstate the actual importance of Ammon (seriously, "Ammon?" "Cliven?" Where the fuck are these people getting their given names, StarCraft?) Bundy and his merry band of shuddering chucklefucks. Calling the Birdbath Occupational Dingbat Brigade "terrorists" gives them far too much credit, as Deadspin's Albert Burneko pointed out earlier this week. Bundy's Boners are sad clowns attempting to get the FBI to lean in to look at their breast pocket flower so they can squirt them in the face (with bullets). They are worth no regard beyond mockery as they howl impotently into the abyss.

But as laughable as these professional cow tippers are, PETA is and will forever remain both infinitely more silly and infinitely more repugnant. Let's run through a few of their greatest hits, shall we? They've attempted to get people to feed vegan diets to cats, which is probably why cats hate humans so much (frankly, we can't blame them). They once claimed milk is racist because African-Americans are more likely to be lactose intolerant. They also willingly allied with Sheriff Joe Arpaio, a leading contender for Most Evil Human Being In America, purely because prisoners in his Arizonan Gulag were eating vegetarian.

Most importantly, and horrifically, they're also zealotic, hypocritical sociopaths. Lest anyone has forgotten, PETA has killed around 30,000 animals in the last decade and a half. The vast majority (96 percent in 2011 alone) of rescue animals brought to them get euthanized without any attempt to find them homes. From their perspective, pets should be dead rather than adopted. LOL DEAD PUPPIES, AMIRITE PETA?

As pictured above, Ammon's Annoyers did actually eat the jerky, which is great news, because it means they're way more desperate than anyone had realized. Still, this feels like a huge missed opportunity. We had hoped that with PETA's arrival, the FBI might set up a hard perimeter to pen the wannabe survivalists in like cattle. If we were really lucky, both groups would have refused to surrender and would have had to eat each other for sustenance. Considering how grass-fed PETA members must be, they're probably delicious.