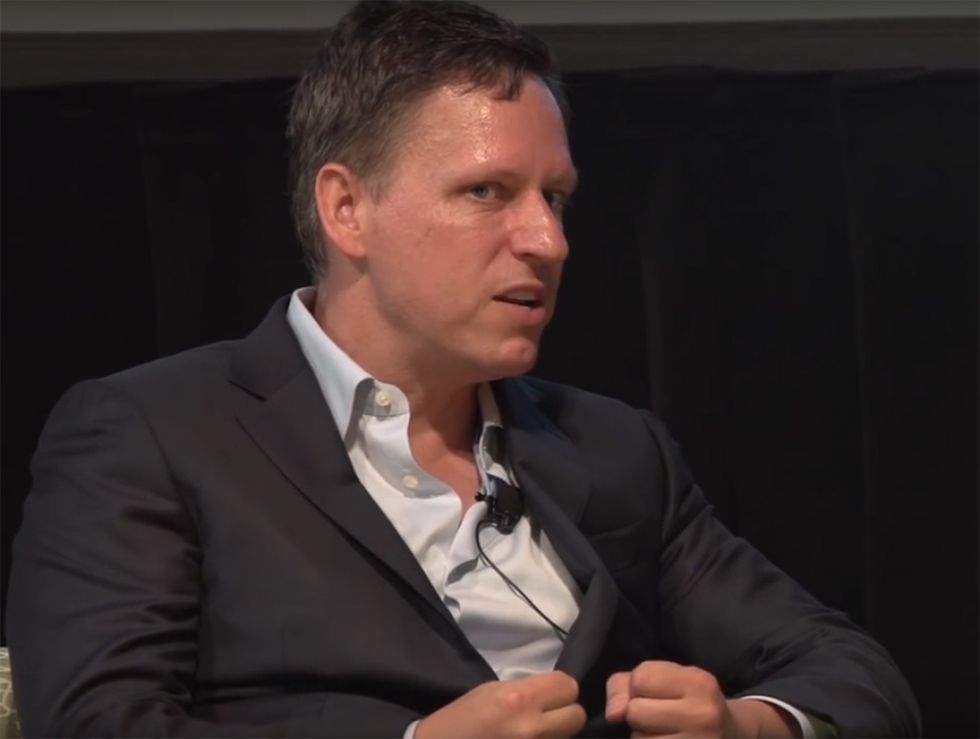 Mark Zuckerberg is an asshole for selling out everyone on Facebook, but what Peter Thiel has done is much worse. Where Facebook exploited its users by selling their personal information for profit, Thiel has created massive databases that don't just scrape social media, they harvest public information and real world connections to create an entire map of everything you do. Facebook can only harvest what you feed into it (well, presumably); Thiel's platform takes everything, from social media posts to police records, license plates, and shopping histories, and creates a terrifying profile of people for crooked cops, creepy companies, and shady political groups.

A new report from Bloomberg details how Thiel's company, Palantir, has created software that uses commercial, proprietary and public data sets to make predictive trends and analysis. It's been marketing this technology to anyone it can -- including big city police departments, Fortune 500's, and the US military. (Do click through to read Bloomberg's account, including scenes of insanity complete with references to Apocalypse Now.)

Palantir's programs work by gobbling up everything they can to create spider graphs of a person's life. These maps can be invaluable tools to, say, ICE agents looking for suspected illegal immigrants in sanctuary cities, or for FBI agents hunting suspected terrorists. We stress "suspected" because the software is not foolproof, but they're selling it to law enforcement agencies, credit card companies, and multinational corporations looking to minimize the size of a dragnet.

With Palantir, you can run, but you can't hide because they'll just add another charge to the database.

According to Palantir, this allows companies to save money on marketing, helps local cops solve crimes, and allows the military to track threats in warzones. The LAPD gushes about Palantir software in a boilerplate promotional video, detailing how it helped them solve a cold case after a city traffic camera ID'd the suspect's car driving down the street.

On the other side of this are people who've been inaccurately labeled and targeted by law enforcement agencies. Simply living in a shitty neighborhood can suddenly put an innocent person in gang databases. This already happened in Chicago when the city's 14 different databases were integrated with Palantir, resulting in the beating and detention of a man by ICE agents, despite Chicago's sanctuary city status.

Bloomberg notes that the company harvests all sorts of data from people, from personal relationships between lovers, friends, and family members, to employee log-in information. All this data, according to Palantir, allows them to anticipate behavior whether of a disgruntled employee or a political opponent. In 2010 Palantir submitted a proposal to the US Chamber of Commerce, a rabidly wingnut "pro-business" lobby, to spy on liberal opponents, and sabotage them. They almost got away with it too, but some meddling hackers leaked private emails and the plan was scuttled.

While Palantir's coders and designers may be trapped in Silicon Valley's arrogant bubble of bullshit, Thiel most certainly is not. He knows exactly what he's doing. Thiel boasts about stopping terrorist attacks with his suite of spyware, but he won't talk about helping Cambridge Analytica in 2016. Well, maybe not publicly, but he'll certainly talk about his fondness for Ayn Randian fever dreams.

It's clear that we now live in the dystopian sci-fi nightmares of Ballard, Doctorow, Ellison, Gibson and Sterling. Palantir is like Frankenstein's Monster, except Frankenstein is a psychotic Trumpian prick with a fucking "blood boy" and who owns a piece of New Zealand the size of Lower Manhattan. Thank goodness Congress is modestly aware of the Internet.

Wonkette is ad-free. Please throw us a buck to help us stay that way!