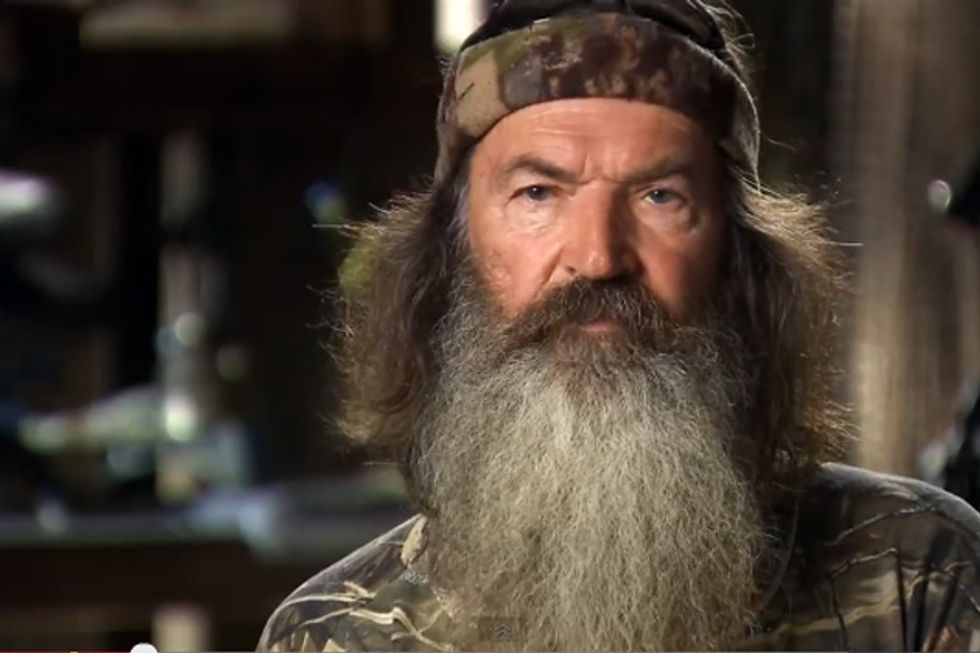 Hey! Here is a big surprise! Phil Robertson is once again mad that people think he is a bigot just because he is obstinately devoted to his own prejudices and would prefer to treat the members of a certain group with hatred and intolerance, which is a totally different thing from being a bigot, no matter what those LIE-berals Merriam and Webster have to say about it.

What is Phil Robertson being totally not bigoted about this time? Why, it is trans people going pee, because that is what everyone is being not bigoted about these days! Though it should be said that Phil is not some poseur getting on this bandwagon now because it is the hip thing to do these days. He has been angry about trans people peeing for YEARS. For at least two years Phil Robertson has sat and thought about trans people peeing and pooping at the women's urinals right next to six-year-old girls who will be traumatized FOR LIFE by their penises dangling out there in the open, because that is obviously how all of this will work.

Now, in light of all this recent talk about trans people and their bathroom habits, and mean ol' Loretta Lynch saying she won't let North Carolina have their nice law for making sure that trans men use the ladies room and trans women use the men's room, Phil has issued a plaintive letter to his fellow idiots encouraging them to stand with him. Unless they are a trans man, in which case they will have to stand in the ladies room.

[wonkbar][/wonkbar]“This is Phil Robertson from Duck Commander and I’ve got a radical idea," he wrote. "Men should use the men’s bathroom and women should use the women’s bathroom. Just because a man may ‘feel’ like a woman doesn’t mean he should be able to share a bathroom with my daughter, or yours. That used to be called common sense. Now it’s called bigoted.”

Ah yes, COMMON SENSE. You know "the thing" about common sense is not that it is "not so common" (LOL), but that literally everyone thinks that the things they personally think are common sense. Otherwise, we probably would not think those things, and think other things instead. I, for one, think it is patently ridiculous to think trans men should use the women's room and trans women should use the men's -- as does literally every other human being I know. How is that for common? I also think that if some cis dude pervert was truly desperate to pee next to some ladies, that it would be just as easy for him to say he was a trans man. Duh.

“The Judeo-Christian values that led America to greatness are under full assault by the mob mentality of political correctness, and we’re slowly losing our soul.”

Really. Like, name a single, individual value specific to "Judeo-Christian" values that led our country to "greatness." Specifically, the one that has to do with peeing. Why you gotta be so vague, Phil! And what's with this "Judeo-Christian" values thing? Is it so you don't seem like a an actual Nazi despite your fondness for military garb and discrimination? Are we pretending that Jewish people have had an easy time of things here in America? Or that they were regularly consulted on what being a Real American should mean? Because I feel like that is not the case. In fact, I am pretty sure that anti-Semitism was a pretty big thing here for quite some time, and is also a thing now. How many Jewish people does Duck Dynasty even know? Given that only 0.13% of the Louisiana town he lives in is Jewish, I am going to guess "not too many."

Also if trans people going pee next to you is going to make you lose your very soul, I don't know what to tell you. I don't believe in souls, but if I did, I'd imagine it would take more than that to make me lose it. Also, if your soul is really into discriminating against people, that is a shitty soul and you should be glad to lose it. Get a new soul that is less of a jerk is my best advice to you, Phil Robertson.