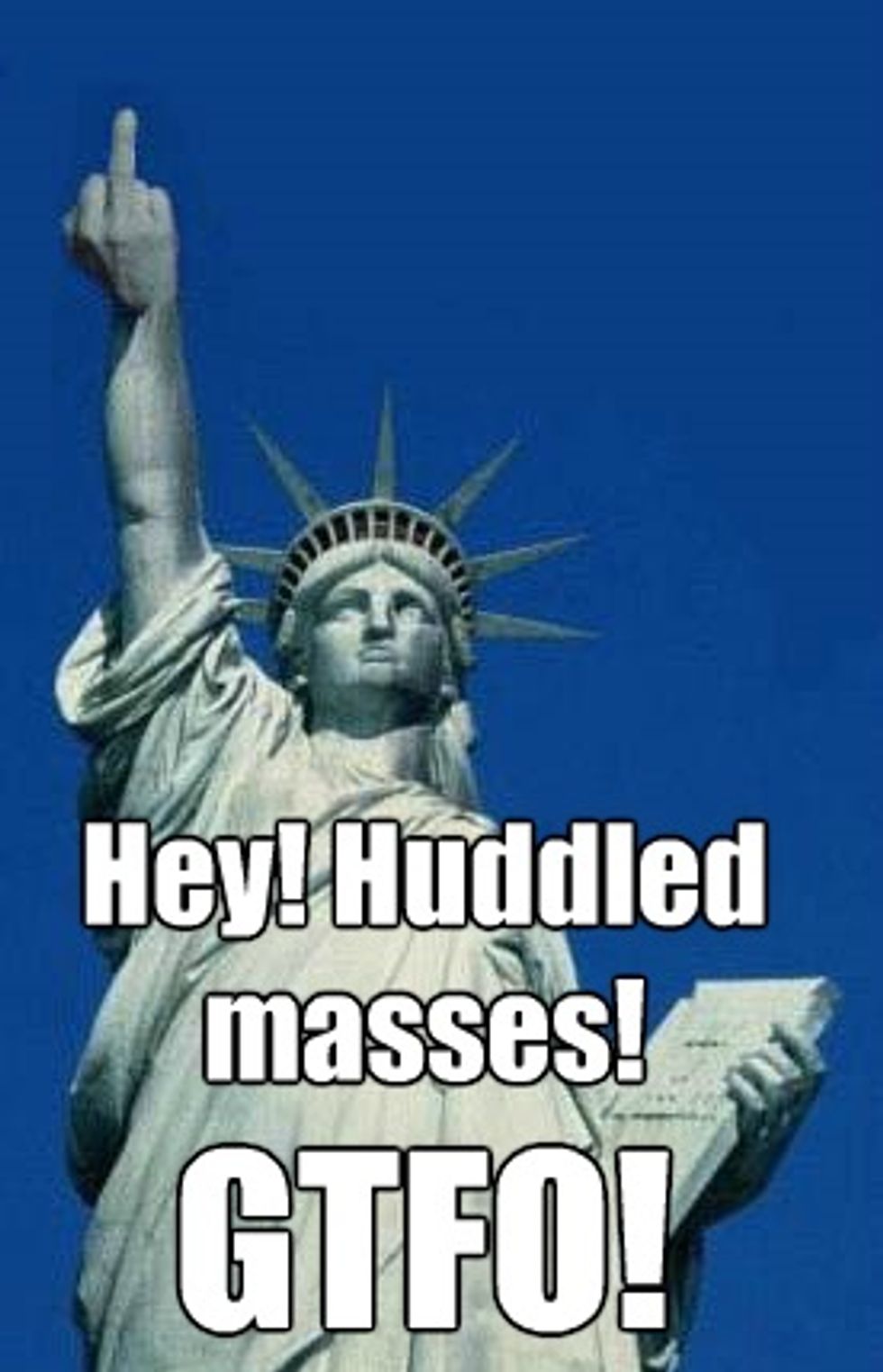 Phyllis Schlafly, the Queen Mum of rightwing hate, is getting pretty tired of the poor and the huddled masses yearning to breathe free. So yesterday, shetossed a tempest; in a radio commentary, she insisted that the Statue of Liberty actually “has nothing whatsoever to do with immigration.” Schlafly also dismissed Emma Lazarus' poem "The New Colossus" as some disgraceful graffiti that actually ruined the monument. In her version of the statue's history,

“people who had nothing to do with this great gift from the French were allowed to paste a plague on the base of the statue with a quotation that has misrepresented the statue as an invitation to open immigration.”

We're not sure whether Schlafly will now call for the banning of Neil Diamond's "Coming to America" and sentimental movies depicting hopeful immigrants cheering as their ship enters New York harbor, or if she'll settle for the inclusion of a disclaimer on all copies of these popular lies.

As if Schlafly's general horribleness weren't bad enough, she also tries to suggest that FDR and Ronald Reagan would agree with her, cribbing phrases from speeches they gave to commemorate the 50th and 100th anniversaries of the monument, but kind of ignoring the decidedly pro-immigration sentiments of both speeches. Roosevelt's entire 1936 speech was about immigration, about those "who had the supreme courage to strike out for themselves, to abandon language and relatives, to start at the bottom without influence, without money..." Wouldn't you love to hear a President say something like this today?

Perhaps Providence did prepare this American continent to be a place of the second chance. Certainly, millions of men and women have made it that. They adopted this homeland because in this land they found a home in which the things they most desired could be theirs—freedom of opportunity, freedom of thought, freedom to worship God. Here they found life because here there was freedom to live.

It. is the memory of all these eager seeking millions that makes this one of America's places of great romance. Looking down this great harbor I like to think of the countless numbers of inbound vessels that have made this port. I like to think of the men and women who, with the break of dawn off Sandy Hook, have strained their eyes to the west for a first glimpse of the New World.

They came to us -- most of them -- in steerage. But they, in their humble quarters, saw things in these strange horizons which were denied to the eyes of those few who traveled in greater luxury.

They came to us speaking many tongues -- but a single language, the universal language of human aspiration.

Pretty good. And of course, Roosevelt was talking to an audience for whom that American journey was still part of recent, messy memory, not yet a sepia-toned myth of seamless assimilation. Schlafly pares that first paragraph down to get rid of the actual immigrants:

"The Almighty did prepare this American continent to be a place of the second chance.... Millions have ... found ... freedom of opportunity, freedom of thought, freedom to worship God."

No surprise, though. This is, after all, a woman who has argued that the Bible's injunction to show compassion to strangers in a strange land only applies to visitors, not those scummy immigrants, who Jesus would presumably have deported.

Oh, and compare, please, Schlafly's pinched, "I got mine, you stay out" meanness with the hopes of FDR, in the middle of the Great Depression:

Even in times as troubled and uncertain as these, I still hold to the faith that a better civilization than any we have known is in store for America and by our example, perhaps, for the world. Here destiny seems to have taken a long look. Into this continental reservoir there has been poured untold and untapped wealth of human resources. Out of that reservoir, out of the melting pot, the rich promise which the New World held out to those who came to it from many lands is finding fulfillment.

The richness of the promise has not run out. If we keep the faith for our day as those who came before us kept the faith for theirs, then you and I can smile with confidence into the future.

We're pretty sure of this much: in the 19th century, there were a hell of a lot of peasants who risked pretty much everything to get to America so they could be free from people exactly like Phyllis Schlafly, who is just about as un-American as it's possible to get.