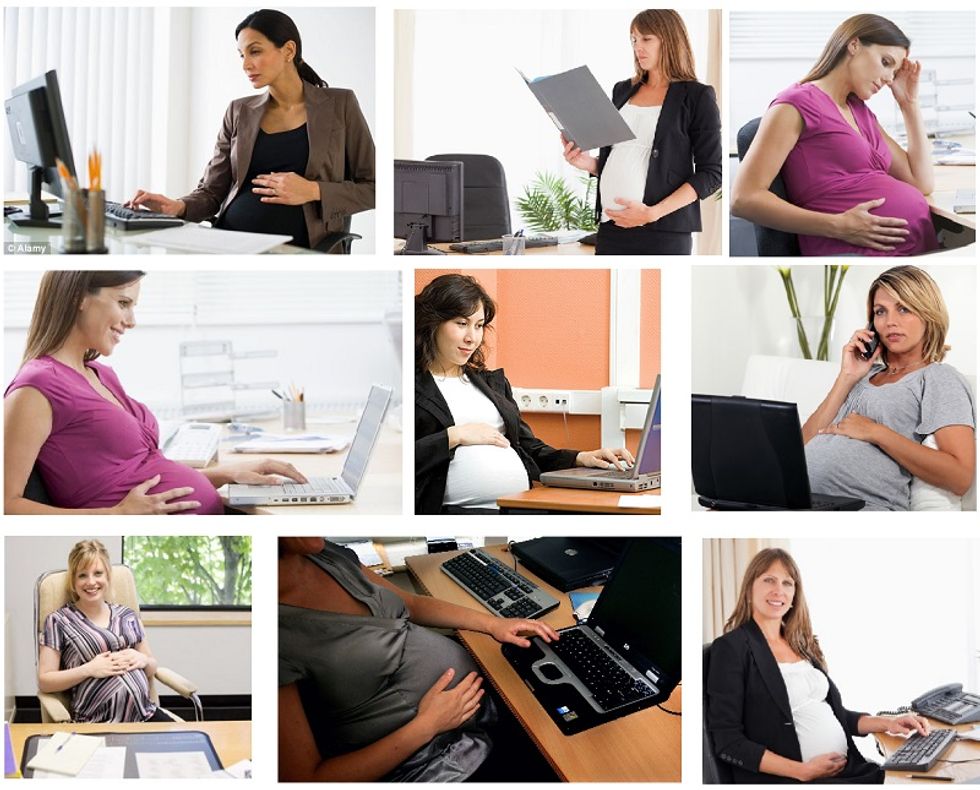 Wondering how feminists are destroying America today? Of course you are! Lucky you, the dude lawyer representing Phyllis "Yep She's Still Around, She's Worse Than Cockroaches" Schlafly's organization devoted entirely to keeping ladies who aren't Schlafly in their place has your answer right here, for you to choke on.

The Eagle Forum filed an amicus brief in Young v. United Parcel Service, the case before the Supreme Court about whether pregnant ladies who have the audacity to be pregnant and employed at the same time should have the right to not lose their health coverage and their paychecks for the crime of being pregnant. We have already pre-ordered barf buckets in anticipation of the Court's ruling by a majority of justices -- who have already made it clear that they are unclear about how babby is formed -- that pregnant ladies should shut up already, sheesh, and go make them some sammiches.

You will be shocked and amazed to know that the Eagle Forum is on the side of UPS, which refused to accommodate Peggy Young when she became pregnant and was instructed by her doctor to not lift heavy packages. While UPS has plenty of jobs that do not require lifting heavy packages, and offers exactly that kind of accommodation for other employees who are temporarily instructed by their doctors to not lift heavy packages, those other employees are not pregnant ladies, so they actually have a good reason for being accommodated.

Being a pregnant lady, on the other hand, is this whole other thing, which is why UPS had no choice but to put her on unpaid leave and take away her health insurance. Nothing personal, it's just business. And also America. Maybe if Ms. Young had a legitimate reason for needing a temporary accommodation -- like if she had a note from her doctor saying she'd injured herself playing sportsball with her bros over the weekend -- UPS could do something about that. But alas, the Pregnancy Discrimination Act (PDA), which is intended to prevent pregnancy discrimination as its name ever-so-subtly suggests, somehow doesn't apply because it's not like UPS is discriminating against Ms. Young for being pregnant. Just for, um, being -- hahahaha, who are we even trying to kid? But this is America, and everything is terrible, so here we are, sigh.

Why does Schlafly's group think protecting pregnant women's right to keep their jobs would destroy America? Oh, you know, the usual.

As with many well-meaning efforts at social engineering, Young’s reading of PDA would harm not only the intended beneficiaries but also coworkers (who must support the beneficiaries)  and economic competitors (who are disadvantaged by the bestowing of preferential treatment on others).

In other words, the PDA itself is a terrible thing because "social engineering." That's conservative speak for Big Government getting in the way of straight white Christian men who own property making all the rules, as Thomas Jesus Jefferson intended. And SCOTUS forbid, if employers are forced to start accommodating pregnant persons who happen to be women who have temporary restrictions on the work they can perform the same way they already accommodate other non-pregnant persons who have far better excuses for needing accommodations, how fair would that be? Un! It would be so unfair, even though accommodating not-pregnant employees is somehow not unfair, but that is different because it is different so there. Besides, accommodating Ms. Young's request that she be assigned other duties during the course of her pregnancy would -- and brace yourselves, this is utterly THE WORST -- "forc[e] her predominantly male coworkers -- who support their own spouses and children -- to do the heavy lifting." Won't someone PLEASE think of the men even more?

It would also be very unfair to families, because women shouldn't be working in the first place, so making it easier for them to work while they are pregnant means we're just a hop, skip, and a jump away from the collapse of the traditional family structure. Yet again.

The reading of PDA put forward by Young and her amici would harm American families, which is not the result that Congress intended in 1978. Quite simply, the accommodation Young requested is not good policy, which is why Congress did not require it. In enacting PDA, Congress never intended: (1) to eliminate stereotypes of husband-breadwinner, wife homemaker families; (2) to have women return to work immediately after giving birth to the exclusion of caring for their newborns; (3) to have pregnant women work as package-delivering truck drivers; or (4) to privilege the status of female truck drivers over either male truck drivers or the women married to male truck drivers. While the eradication of typical -- or even stereotypical -- families was the goal of the feminist movement, Congress generally has taken the more moderate path advocated by UPS here.

There is also a fair amount of foot-stamping about how The Feminists are trying to sneakily rely on the Equal Rights Amendment, which was never ratified, as the brief points out about a thousand times, gleefully bragging that Schalfly's organization had a direct role in making sure the absurd notion of equality for chicks was never added to the Constitution. Too bad, feminists. You might have had a good argument, maybe, for Ms. Young if you'd managed to get your stupid amendment, but hahahahaha, you lost! So suck it and get back in the kitchen.

There are also some very sound arguments in the brief explaining why women do not belong in the work place because their husbands and children need them at home where they belong, as reasonably argued by the great scholar Charles "Bell Curve" Murray, the go-to guy for anyone who wants to suggest that maybe people who are not white men should not have the same rights as white men because, come on, it's not like they are white men. It's just a plain simple fact that if pregnant ladies have rights, that will encourage single motherhood, which is also THE WORST, and, as the brief quotes Murray mansplaining, "Throughout human history, a single woman with a small child has not been a viable economic unit."

What does this have to do with Ms. Young? Nothing at all, but shut up. The point is, if the Court were to recognize that pregnant ladies have rights under the very law intended to recognize that they have rights, the feminists will win, and Schlafly will lose, and that is the saddest thing ever. It will probably even encourage women to force the government to pay for their abortions on demand, because you know how greedy and demanding women can be. How does enforcing the Pregnancy Discrimination Act slippery-slope us to taxpayer-funded abortion on demand? Who knows? Who cares? It just does, maybe. Be afraid. Aren't you afraid? BE. AFRAID!

Also, there is this Hallmark-esque Deep Thought:

"Life is a series of tradeoffs, and “you can have it all” does not mean “having it all given to you.”

We expect the Court to agree completely with this brief, because we were not born yesterday. Heck, we would not be entirely surprised if Justice Kennedy wrote the majority opinion by simply signing onto this brief and scribbling, "What he said." But maybe the Court will surprise us and the robed menfolk will understand that women are people too.

But we doubt it.