Pizzagate Crazy Roseanne Fave Says Hillary Clinton Carved A Witch Face On A Lady's Vagina. AND SO MUCH MORE! 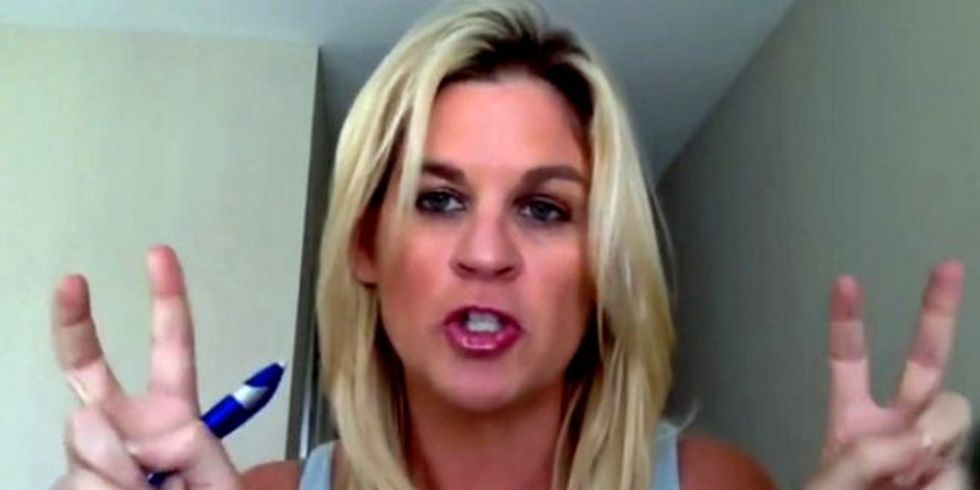 One of the more daunting aspects of the Trump presidency has been the near-normalization of completely bizarre conspiracy theories. He's a birther and an anti-vaxxer himself. He said Alex Jones had an "amazing reputation." During his presidency, not only have we had to deal with Pizzagate shit, but also the Seth Rich bullshit, and now all this QAnon nonsense.

It's got me pining for the days when conspiracy theorists were just going on about the Kennedy assassination and aliens and whatever.

Fun fact, I totally had a crush on John Fitzgerald Byers.

One of the leading cranks these days, particularly on the QAnon front, is Liz Crokin, a former gossip columnist who was the source of Roseanne Barr's strange tweets about how Trump is breaking up all of the sex-trafficking rings.

You may also remember her from the time she accused Chrissy Teigen and John Legend of being in cahoots with a child pedophile ring based on Teigen tweeting pictures of their daughter dressed up as a hot dog, a pineapple and Alice In Wonderland along with a pizza emoji -- which Crokin claimed were all secret pedophile codes.

Specifically, Crokin believes all of Hollywood and all the "Liberal Elites" are involved in Satanic pedophile rings. Apparently, part of the reason we all do this is because we are super into a drug called adrenochrome, which we can only get by scaring children and then harvesting their adrenal glands.

Of course, adrenochrome is created in a lab by oxidizing epinephrine, not by harvesting it from children. While there were some tests on it back in the '60s to see if it had any psychedelic properties, it is not currently considered to have any. It's hard to tell where this all started, but there was a fake drug also called adrenochrome mentioned in Fear and Loathing in Las Vegas and it may stem from that.

This is all part of the general QAnon/FollowTheWhiteRabbit/TheStorm/Pizzagate/Pedogate conspiracy theory. If you are not familiar with it, people think that Donald Trump has deployed someone in his administration with Q Level clearance to send secret coded messages to them... on 4chan. These messages often deal with Trump's war against the "Deep State" and, apparently, his ongoing battles against child sex traffickers.

While there are a lot of theories about who this Q person is (definitely NOT some bored ass teenager LARPing in his basement), Crokin shared a post on Sunday suggesting that it was none other than JOHN F. KENNEDY JR. Who, as you may know, is quite dead.

According to the post shared by Crokin, JFK Jr. never died, and is now helping Donald Trump with his anti-pedophile efforts. Sure, why not!

Crokin also claims that the Elite Liberal Satanists are trying to kill people like her off because they are standing in the way of their dream of a Moloch-worshiping pedophile one-world government.

One would think that an evil Satanic cabal that LOVED baby eating would be less fond of abortions as it would diminish the food supply, but what do I know?

Of course, Crokin notes that "they" can't kill them off entirely using these methods, so "they" are deploying all of their best celebrities in hopes of getting "raping kids and eating kids to be cool and normal.” Celebrities like Lady Gaga and Katy Perry and Drew Barrymore! You know, because she's in that Netflix show about cannibalism that I never got around to watching?

She has also "noticed" that every celebrity who says mean things about Trump is a Satanist! Woah, if true.

Crokin also claims that Hillary Clinton filleted a child's face off one time, because sure, why not...

And that she also molested this one lady who had a witch face carved into her vagina by Satanists in order to entice Sen. Robert Byrd.

That lady, by the way, is one Cathy O'Brien, and she is basically Pizzagate patient zero -- all of these conspiracy theories essentially stem from her, and she's been pushing them since around 1995. Here is a video of her speaking... and being introduced by Roseanne Barr. In 2012. O'Brien claims that she was, from childhood, a CIA-mind-controlled sex slave to all of the politicians -- including the Clintons, Byrd, Bush I, Gerald Ford, Ronald Reagan and Dick Cheney -- and that her "handler" was a country and western ventriloquist named Alex Houston. They were all, of course, Satanists. A search for her name on Twitter shows that a lot more people take her seriously than you would think.

But back to Liz.

Once upon a time, Crokin was a gossip columnist at RedEye -- the Chicago Sun-Times's daily free paper. She'd also worked for the National Enquirer and Star. But, in 2012, she was diagnosed with a form of viral meningitis that had developed into menigoencephalitis (a swelling of the brain that can often cause brain damage) -- which she says she was told was caused by herpes. She claims she was given herpes by an ex, whom she later filed a personal injury suit against.

Since then, she has claimed that her brain has "healed itself." That seems unlikely.

I don't want to make fun of Liz Crokin. I do not think brain damage is funny. I think everything about this is straight up horrifying. If she were just some random person screaming on the street about this stuff, I would call someone to come help her. I don't know if she believes these things as a result of the brain damage, but it does seem like that may be the case.

What scares me though is that she has 60,000 followers on Twitter. They can't all possibly have brain damage. There are so goddamned many of these people I can't believe it. They believe in this shit, they believe in Satanic Ritual Abuse, and they believe that Donald Trump is waging a secret war against pedophile rings. Some of them, like the witch face vagina lady, even claim to have been raised in these secret Satanic New World Order Pedophile rings. I don't understand how or why we are living in a world where this is so widespread.

So, because it's so widespread, because it's such a "thing" now, we can't just blow people like Crokin off like they are just rando cranks with no influence. Brain damaged or not, she has influence, and there are a lot of people out there who believe the things she says.

As crazy as we think Trump has driven us, he may have made his followers crazier.

Wonkette loves pizza. Make of that what you will, but maybe drop us some extra cash so we can order some!

From Your Site Articles
Robyn Pennacchia