Please Enjoy The Slow But Steady Unraveling Of David Brooks 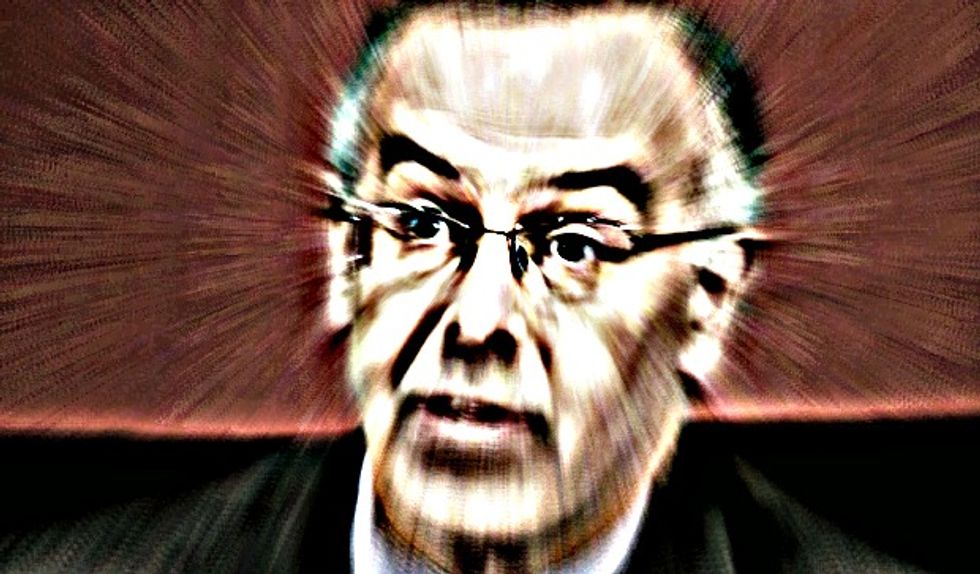 We've been eagerly covering the complete mental disintegration of not one, but two, esteemed columnists at the paper of record lately. Both David Brooks, America's least intellectual public intellectual, and Ross Douthat, a freshman term paper on Opus Dei made flesh, are slowly devolving over the utter and complete collapse of the GOP. Douthat is alternately blaming Obama for Donald Trump and pretending that the GOP will come to its senses at the convention. Meanwhile, Brooks went from an unseemly and unrequited man-crush on Marco Rubio to finally realizing Ted Cruz is a total dickbag to blaming himself and the media for the rise of Trump.

This week, Brooks spent some quality time rocking back and forth in the corner trying to tell himself that everything is going to be just fine no really listen it's totally fine he's not worried no you're the one that's worried. You can tell he's completely off the rails, however, by the fact that he throws Saint Ronnie under the bus in the very first 'graf.

This is a wonderful moment to be a conservative. For decades now the Republican Party has been groaning under the Reagan orthodoxy, which was right for the 1980s but has become increasingly obsolete. The Reagan worldview was based on the idea that a rising economic tide would lift all boats. But that’s clearly no longer true.

Huh. You know, David, most of us realized that ages ago as we watched the rich basically grind us all under their boot heels, but you probably didn't notice because you are an overpaid dilettante and you didn't have to worry about whether the economic tide rose or not. But now that a nitwit barbarian is going to be your party's nominee, you have to find a way to deal with all your cognitive dissonance. Leave it to Brooks to do so in the most pompous way.

Trumpism will not replace Reaganism, though. Trump is prompting what Thomas Kuhn, in his theory of scientific revolutions, called a model crisis.

According to Kuhn, intellectual progress is not steady and gradual. It’s marked by sudden paradigm shifts. There’s a period of normal science when everybody embraces a paradigm that seems to be working. Then there’s a period of model drift: As years go by, anomalies accumulate and the model begins to seem creaky and flawed.

Then there’s a model crisis, when the whole thing collapses. Attempts to patch up the model fail. Everybody is in anguish, but nobody knows what to do.

That’s where the Republican Party is right now.

Huh. Maybe Brooks, not Douthat, is the freshman term paper come to life. Except if it is a freshman term paper, it's one that reeks of flop sweat and reads like it was typed on the bus on the way to school. Brooks has to grapple with the fact that Trump is a playground bully who gets off on smashing everybody's teeth in, but instead of coming to the logical conclusion that hey, maybe you belong to the political party that likes teeth-smashing, you have to instead come up with the idea that this is just the birth pangs of a kindler gentler GOP.

Trump is loveless. There is no room for reciprocity and love in his worldview. There is just winning or losing, beating or being beaten.

It is as if he was a person who received no love and tried to compensate through competition. That is an ugly, freakish and untenable representation of the human condition. Somehow the Republican Party will have to rediscover a language of loving thy neighbor, which is a primary ideal in our culture, and a primary longing of the heart.

Oh right. The old "conservatism can never fail, it can only be failed" chestnut. We were wondering when Brooks would whip out that particular security blanket and start sucking on its edges. Deep down, you're all beautiful people who only want to love and be loved, and Trump is an interloper rather than the distillation of the howling id of your hateful racist low-information party. Hope that little fairy tale helps you sleep at night.