Please Forget Trump's Pee Hookers And Focus On The Treason, You Know Allegedly 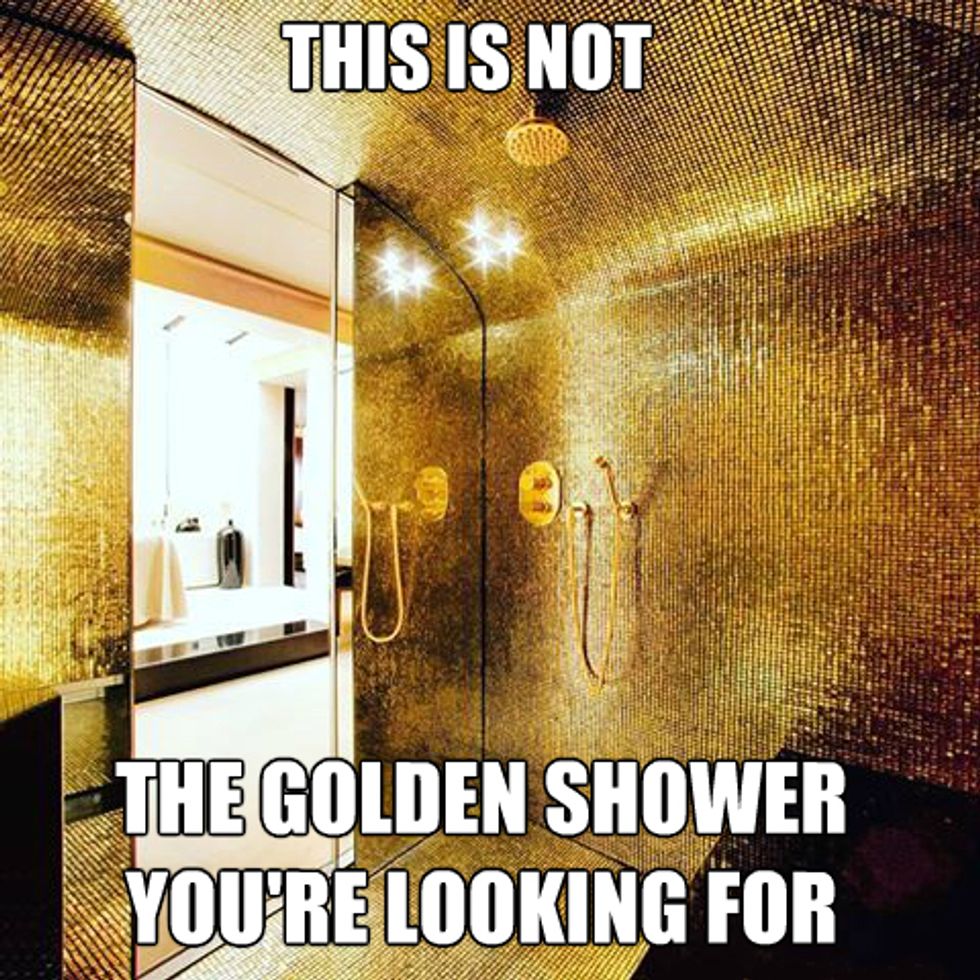 It is a pune, or play on words

So the great big alleged Russia/Trump intelligence report is the only thing in the news today, apart from Obama's farewell address last night (perfect timing!), four cabinet confirmation hearings, and a Trump press conference that -- against all odds -- he's actually having! Yes, yes, everyone wants to talk about the PEE HOOKERS. The PEE HOOKERS are not the issue here, Dude. We're talking about alleged collusion between a presidential campaign and a foreign intelligence service. Also, Dude, PEE HOOKERS is not the preferred nomenclature. "Ladies of negotiable micturition," please.

Now, let's look at the stuff that might actually matter for, like, national security, and leave the PEE HOOKERS alone for a while. Can you believe it? Pee hookers? The things we should be paying attention to are the allegations that Donald Trump and his campaign staff colluded with Russian intelligence agents on a campaign of leaks and derogatory information against Hillary Clinton. How credible are the allegations? No telling -- but it was concerning enough that U.S. intelligence agencies briefed President Obama and President-elect Trump about the dossier's existence. So let's dive right in. To the allegations, not the pee. Ew. If you want to follow along in the documents published by Buzzfeed, here they are.

Donald Trump's brilliance as an international negotiator was on display as he explained he'd insist on payment up front before defending NATO allies.

Donald Trump Tells Best Bud Vladimir Putin, Sure, Go Ahead And Keep Crimea. You Earned It!

Donald Trump might have said he's considering reversing American policy and recognizing Russia's annexation of Ukraine. Or he might not have understood the question. Does it matter?

Page 8: The dossier alleges that, in exchange for the release of hacked emails from the Clinton campaign, the Trump campaign agreed to "sideline Russian intervention in Ukraine as a campaign issue and to raise US/NATO defence commitments in the Baltics and Eastern Europe" -- which Trump certainly did, in the actual campaign, with his repeated statements that if the Baltic states wanted support from the U.S. under our NATO treaty agreement, he'd have to check to see if they'd paid what he thought was their fair share toward their own defense. And in July, at the very last press conference Donald Trump held, when he made the little joke about what a hoot it would be if Russia hacked Hillary Clinton's emails, Trump also seemed very receptive to the idea that Russia could go ahead and keep Crimea, why not?

The other possible bombshell on page 8 of the dossier is the claim that Trump and his team were mostly unbothered by the news of possible Russian hacking of the DNC and Clinton campaign, because it would distract from his huge financial dealings with China -- that's a thing that would make a hella big difference, if true. Also, more sex stuff. Frankly, we find it difficult to believe Donald Trump would ever find prostitutes a satisfactory replacement for real estate deals and money.

Donald Trump's choice for secretary of State appears to be just another Russian hack.

Page 9: Alleges secret meetings in Moscow between Trump associate Carter Page and Igor Sechin, the head of the Russian state-owned oil company Rosneft, in which was allegedly discussed the possibility of lifting sanctions on Russia over its actions in Ukraine, in exchange for energy cooperation. And hey, Rosneft is the company ExxonMobil CEO and Secretary of State nominee Rex Tillerson negotiated a half-trillion dollar deal with, [Update: whoops, we originally said "half-billion." That's chicken feed! -- Dok] before those nasty sanctions got in the way. Tillerson received the Russian "Order of Friendship" medal for his efforts, because Oil Is Magic.

This meeting is mentioned again on Page 30, with the added detail that Sechin promised big money to Page if he wanted in on the deal:

Pages 11-12: A Russian emigre says Trump and his associates supposedly gave information to Russia for eight years about Russian oligarchs and what they were up to while visiting the USA, which we find a bit of a stretch, given Trump's documented short attention span. Come on. The document also claims the emigre said he or she knew Russia had compromising information on both candidates, but didn't need to use any leverage against Trump since he was already so cooperative with them.

Page 15, page 17: Not related to Trump, but INTERESTING: alleges Russia targeted "educated youth" who might be disgusted with Clinton as an establishment figure to sway them to Trump if at all possible. The DNC leaks were also allegedly aimed at peeling Sanders supporters away from Clinton toward Trump, so oh god, now the comments will be full of "Bernie Bros were Rooshian Dupes" posts and we all live in upside-down land.

Pages 18-19: First mention of an alleged meeting in Prague between Donald Trump's lawyer Michael Cohen and Kremlin operatives, in August 2016:

Pages 32-33 allege that Cohen was "heavily engaged in a cover up and damage limitation operation" to prevent Trump's connections to Russia from becoing known. If this turns out to be true, it would be Watergate levels of Huge. Possibly bigger. But that's a big "if," as everybody keeps saying.

Pages 34-35 offer additional details of the supposed Cohen-Russian meetings, claiming that Cohen discussed the details of paying off operatives and hackers, and discussions of what to do if Hillary Clinton won the election:

The most explosive stuff here isn't the pee. It's those alleged contacts between Trump people and Russian government officials, especially the stuff with Michael Cohen, who absolutely denied anything in the report was true, telling .Mic Tuesday that the entire report was "fake news:"

"Somebody is having a lot of fun at your expense," Michael Cohen, special counsel to Trump, laughingly told Mic in a phone interview on Tuesday night.

"It's so ridiculous on so many levels. Clearly the person who created this did so from their imagination or did so hoping the liberal media would run with this fake story for whatever rationale they might have."

Cohen went on to say the story was "absolutely silly," and then, to add to the overall climate of seriousness, posted a photo of his passport cover to Twitter along with an absolute denial that he'd ever been to Prague, so there:

On CNN this morning, Jake Tapper said that in his efforts to check out the story, he'd spoken to a government source who said a completely different person named Michael Cohen had indeed been in Prague, but it wasn't Trump's lawyer:

So how seriously should we be taking this thing? At this point, we'd say Enough that it's worth more efforts to verify, but damned if anyone has verified it yet. The Lawfare blog says to take a deep breath before either saying "OMG Trump's nailed!" OR "Total Fake!" Go read the whole thing, but for the moment, let's focus on a couple of points we think are worth noting:

[While] unproven, the allegations are being taken quite seriously. The President and President-elect do not get briefed on material that the intelligence community does not believe to be at least of some credibility. The individual who generated them is apparently a person whose work intelligence professionals take seriously. And at a personal level, we can attest that we have had a lot of conversations with a lot of different people about the material in this document. While nobody has confirmed any of the allegations, both inside government and in the press, it is clear to us that they are the subject of serious attention.

As to the legal status of the documents Buzzfeed published, Lawfare points out,

The much-talked-about 2-page summary of the information, of course, is classified, and now that all this is out in the wild, we expect the intelligence community will at some point offer a declassified discussion of the thing.

In addition, BBC journalist Paul Wood (at about 24:00 in the recording) says the business of verifying all of this is an extremely dicey matter:

Well, if the Russians have blackmail material, they're hardly going to release it. So it really comes down to the credibility of these FSB sources, these Russian intelligence officers, quoted by a British intelligence officer, who was employed by an opposition research firm, working first for a super PAC supporting Jeb Bush, and then for an anonymous Democratic donor. So of course it is all extremely problematical.

As of this morning, it's not even clear whether the 2-page summary was actually given to Trump or President Obama, or whether they were briefed on its contents. CNBC reports Trump was not briefed on it:

The summary of a 35-page dossier originally created as part of anti-Trump opposition research was included in material prepared for those briefing Trump, multiple officials told NBC. But it was not given to Trump's team, the senior official told NBC. The document was given to the briefers so that they could make the distinction between analyzed intelligence and "disinformation."

The senior official told NBC News that no investigations found any conclusive or direct link between Trump and the Russian government.

And NBC's Kasie Hunt says the two-page summary wasn't given to Trump, either:

Yr Wonkette's confidential intelligence assessment: Damned if we know! The thing was clearly taken seriously enough that it was (or is still being?) investigated, but it remains unverified, and may never be verified. This doesn't make it "fake news." The dossier was not, as far as anyone can tell, made up by Macedonian teenagers, and unlike "PizzaGate," it was taken seriously by U.S. intelligence agencies, even if they ultimately determine(d?) it's not credible. Now that it's out there, given the supposed credibility of the British ex-intelligence agent who prepared it, the thing should probably get a thorough investigation, huh? Also worth mentioning: Regardless of the veracity of this report, the actual intelligence briefing given to Trump DID point out that Russia hacked Republican-related sources, but only released negative information on Clinton. There is other information out there.

We're going to stay agnostic on the details here, but you know what would lay a lot of this to rest? If the PEEOTUS would release his damned tax returns so we'd have a better picture of where the man's financial entanglements are -- and are not.