Please No! (Yes, Please) Don't Take Bill Maher! (Kindly Carry Him Out Through The Back Entrance) 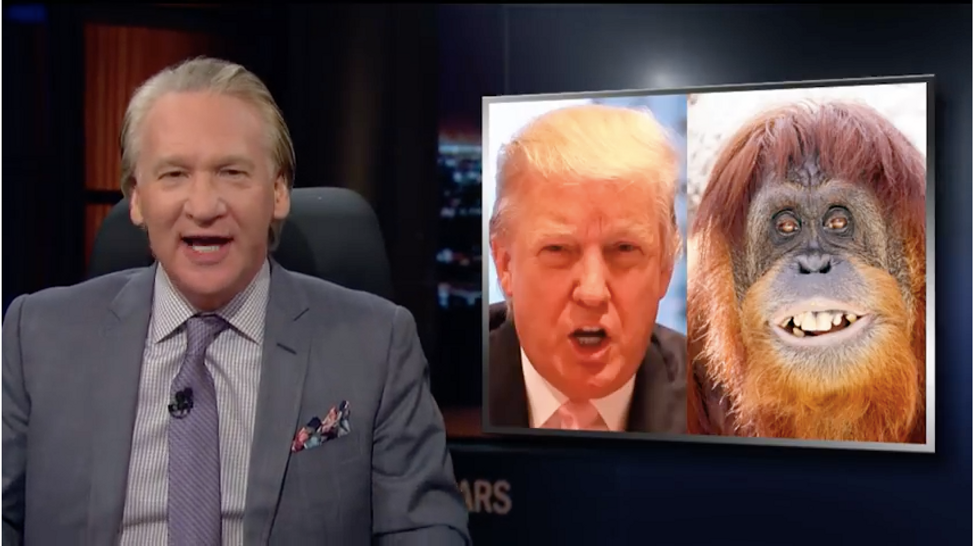 Bill Maher with Donald Trump (l) and an orangutan (r)

Bill Maher, who I don't much like, started trending on Twitter yesterday shortly after that former TV star and current Ambien spokesperson had her TV show cancelled. Apparently, the Army of Deplorables and their enabling sycophants in almost-respectable media thought that if their anti-Muslim bigot lost her TV show then some other anti-Muslism bigot should lose his.

One of the conservatives who tweeted about Maher was Charlie Kirk, Turning Point USA founder and executive, who is friends with the president’s son, Donald Trump Jr. “Wait, Bill Maher makes comparisons to Trump being a gorilla all the time? They get classified as ‘jokes’ by the media and he is of course allowed to keep his show and not have his life ruined,” he tweeted Tuesday. “The difference? Bill Maher is a liberal, Roseanne is a free-thinking Trump supporter.”

Maher was selected from the Great Big Republican Rolodex (their views are from 1954 so why not the technology?) because if it's wrong to compare a black woman to an ape, it must be at least two-fifths more wrong to compare a white man to an ape, which is what Maher did two years ago, which is forever in a post-Trump world. That's like four Trump inner circle indictments, three shitholes insults, two hush money accusations, and a partridge in a pear tree.

Nothing riles the right more than the notion that the "other side" ("us" in this instance) is getting something over on "them." It's why I don't think Trump will ever be impeached, even if Robert Mueller shows up at the House of Representatives with a box containing Gwyneth Paltrow's head that's covered with Trump's DNA. That will mean giving the left ("us" or "them," as they see it ... it's a little confusing) a "win." And despite all recorded history, they see themselves as constantly losing to "us."

What's missed amongst all the outrage is that Maher has already lost a TV show because he offended "them." His ABC series Politically Incorrect was cancelled after Maher said that the 9/11 terrorists weren't "cowards" as President Bush had claimed.

And although Maher is a vocal critic of the orangutan-in-chief, he doesn't qualify in my mind as one of "us" (if I engaged in such reductive thinking). Over on his current show, Real Time, he bashes Muslims and under the pretense of "free speech" gives a lucrative platform to idiots and racist provocateurs, while leaping to the defense of the likes of Ann Coulter and Laura Ingraham. No "liberal" worthy of "offering up" in exchange for yesterday's "victory" calls Berkeley students "babies" or a school shooting survivor a "bully" because they express their First Amendment rights in ways offensive to Bill Maher, who like all fake libertarians defines "freedom" as white people (especially men) saying and doing whatever they want without consequence.

What's funny is that I presumed Maher would criticize ABC for "caving" and cancelling a TV show because its star made a "bad joke." After all, he defended Bill O'Reilly when he said he couldn't listen to Rep. Maxine Waters because of her "James Brown wig." He also derided Democrats for caring about "little bullshit issues" (like racism and sexism), because that's why we lost the 2016 election.

Maher first said, “Hillary, stay in the woods. Okay, you had your shot, you fucked it up.”

Maher found it a little ridiculous that she “spoke up about a joke” from O’Reilly, saying the Democrats lost the election because they always take the bait about “little bullshit issues.” Guest Neera Tanden shot back that racism and sexism aren’t little issues.

Maher asked, “Why is it racist?”

"Identity politics cost Democrats at the polls" isn't a liberal position but rather a hallmark of self-proclaimed anti-Trump conservative concern trolling. Joe Scarborough is famous for it, and frankly, guys, you can take both of them off the air if you want. I'm feeling generous today.

And we forgot to tell you before: This is your OPEN THREAD!