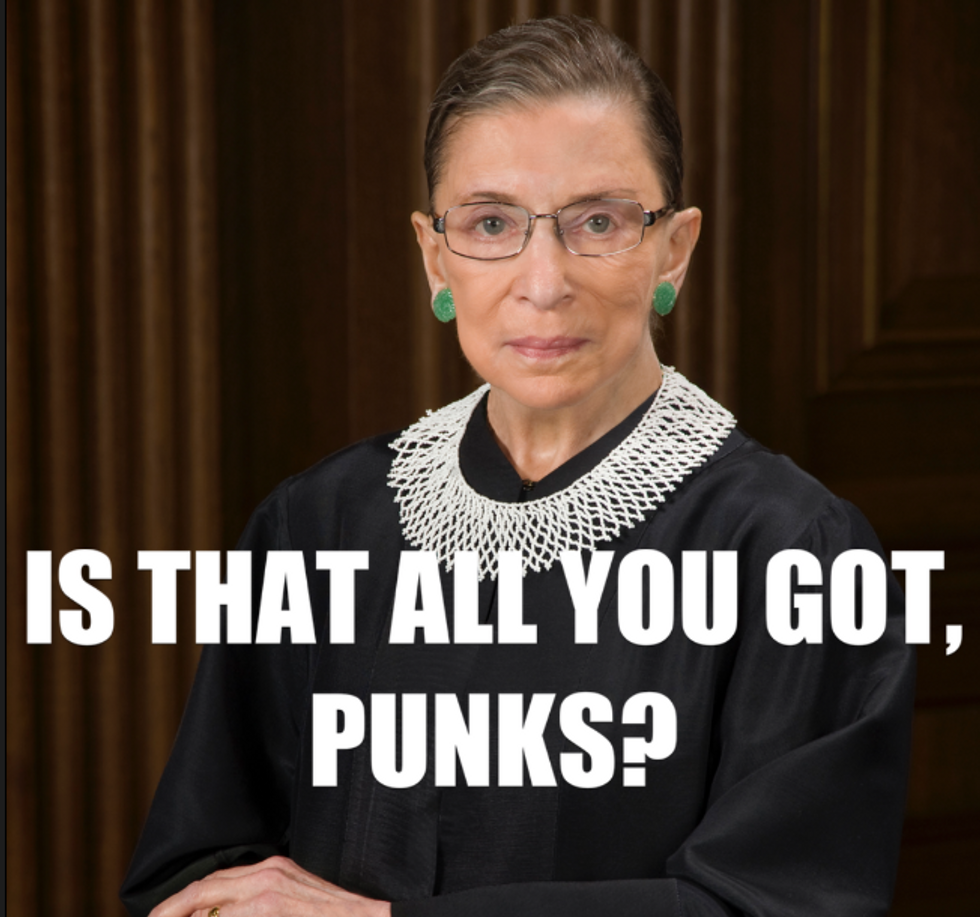 Pity the poor Republicans! Every darn news cycle, the lamestream media pelts them with #FAKENEWS. If it isn't 22 million people losing health insurance, it's Robert Mueller nosing around in poor sweet Jared's creative financing. Today they're even asking people in Not America what they think of President Trump. Like that matters!

Well! Republican Congressmen have a story for you, Wonkers! Daily Caller and the Washington Examiner are already off to the races, so you know Fox is going to give it more airtime today than the CBO report. It's just that important!

Fifty-eight Republican Congressmen have sent Justice Ruth Bader "Badass" Ginsburg a very serious letter, which is most certainly not a transparent attempt to distract from their healthcare shitshow. They insist that she recuse herself from the Travel Ban case right now, Little Missy!

Justice Ginsburg already ruled with the majority to let part of the Trump administration's Travel Ban go into effect. Literally nothing will happen with this case until the Court hears oral argument sometime in October or November. But for some reason, the same day the horrifying CBO score dropped, Congressional Republicans launched an attack on Justice Ginsburg.

During the campaign, the Notorious RBG had the temerity to notice that Donald "Grab 'Em By the Pussy" Trump has a habit of playing fast and loose with the truth. Was it wise to call a presidential candidate "a faker"? Probably not. Although Congressman Mo Brooks, who now has deep concerns about Justice Ginsburg's objectivity, once criticized Trump for being a "serial adulterer" and "someone who I know to have such huge character flaws and who is dishonest." And his fellow signatory Mark Walker chastised candidate Trump for his "morally reprehensible" comments.

But now it is 2017, and these Congressmen insist that Ginsburg has to go for being mean to poor Donnie during the primary. In fact they are sure that Justice Ginsburg will be breaking the law if she doesn't admit her error and slink off in shame. Yes, a bunch of bozos in Congress are going to mansplain the law to a Supreme Court Justice. FML!

You are bound by law to recuse yourself from participation in this case. There is no doubt that your impartiality can be reasonably questioned; indeed, it would be unreasonable not to question your impartiality. Your participation in Trump v. International Refugee Assistance Project would violate the law and undermine the credibility of the Supreme Court of the United States.

Which is all very interesting, except that Supreme Court recusal decisions are entirely at the Justice's discretion. Or as Justice Scalia put it after getting caught palling around with Vice President Cheney, "You and what army?" MORE OR LESS.

At least a dozen of the Congressmen concern trolling Justice Ginsburg are lawyers, who know damn well that their letter is just a publicity stunt with no legal basis. Looking at you, Jeff Duncan and Ron DeSantis!

In fact, the list is chock full of guys who are in no position to be lecturing anyone about ethics. There’s Tennessee Rep. Scott Desjarlais, a doctor who admitted to sleeping with his patients. And Texas Republican Mike Conway, whose wife bought stock in a nuclear company just a few short months after he proposed allowing it to operate in his district. Congressman Ted Yoho, a birther from Florida, who supported legislation to investigate the identity of Barack Obama's real mother, wants to talk about propriety now?

Of course Iowa Congressloon Steve King took time out from tweeting racial slurs about "other people's babies" to put his name on this very serious document.

And what list would be complete without Mark "Appalachian Trail" Sanford! Who is weirdly kind of the best guy of all of them!

Yes, I'm sure Justice Ginsburg feels duly chastened when confronted by ethical paragons like these!

Right now, Fox News hasn't figured out that there are actually 58 Congresswankers making a play to distract the rubes. Because Fox News is A IDIOT.

But today someone will probably show them that second signature page. And after Hannity changes his panties, they'll run that thing all day long. Don't sweat it, Wonkers! This story is 100% bullshit designed to distract from their piece of shit tax plan.

WELL, ACTUALLY Wonkette is ad-free! That's right Sweetheart, every day! You should contribute!