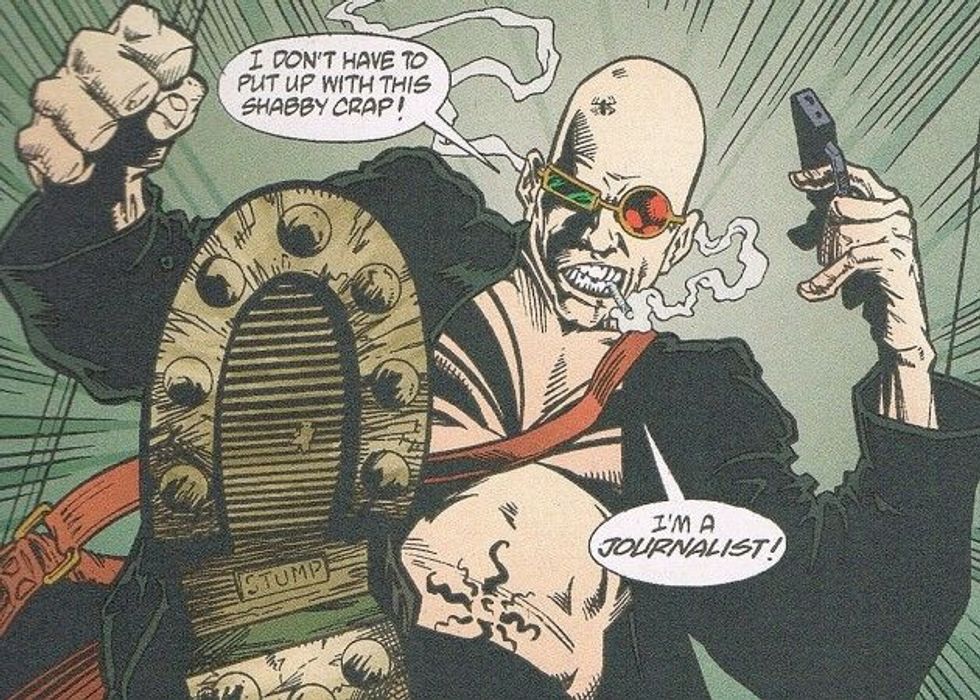 'Journalism is just a gun. It's only got one bullet in it, but if you aim right, that's all you need. Aim it right, and you can blow a kneecap off the world.' -- Spider Jerusalem

Happy news today about high school journalism, and for a change, instead of some sadness where publicity-shy administrators kill a story they fear will freak out parents or make the school look bad, we get to tell you a cool story about student journalists who did their research, righted a wrong, and were even supported by their school district. Yes, in America. Yes, the United States of. In freaking Kansas, even.

Journalism students working on the Booster Redux (the sort of name only a high school paper would have) at Pittsburg High School in Kansas were doing some research on their school's new principal, Amy Robertson, who had just been hired on March 6, and they started finding information that didn't exactly scream "our new principal's resume is flawless":

The student journalists had begun researching Robertson, and quickly found some discrepancies in her education credentials. For one, when they researched Corllins University, the private university where Robertson said she got her master’s and doctorate degrees years ago, the website didn’t work. They found no evidence that it was an accredited university.

One of the student journalists, Connor Balthazor, 17, told the Washington Post, "There were some things that just didn’t quite add up," although since he's a modern teen, we'll assume he didn't say that while wearing a trench coat or flicking ash from his cigarette. We wouldn't absolutely rule out a fedora, though.

Over the course of a weeks-long investigation, the meddling kids found more evidence that Robertson's degrees in education were phony, as was her claim of having worked as an education consultant. The story was published last Friday, and then Tuesday of this week, Robertson resigned. It is not known at this time whether her departure from her position was prefaced by one of the kids pulling a rubber mask off her face and exposing her as the so-called swamp monster that had been scaring people away from the old mill.

Here's the part we like: As you'd expect, their newspaper adviser, Emily Smith, was behind them all the way; she told WaPo's Samantha Schmidt, "Everybody kept telling them, 'stop poking your nose where it doesn’t belong,'" but they kept on asking tough, appropriate questions, and -- get this! -- were encouraged to keep digging by the school superintendent, who apparently knows that students learn by doing, and that journalism isn't always comfortable.

In the Booster Redux article, a team of six students -- five juniors and one senior -- revealed that Corllins had been portrayed in a number of articles as a diploma mill, a place where people can buy a degree, diploma or certificates. Corllins is not accredited by the U.S. Department of Education, the students reported. The Better Business Bureau’s website says Corllins’s physical address is unknown and the school isn’t a BBB-accredited institution.

“All of this was completely overlooked,” Balthazor said. “All of the shining reviews did not have these crucial pieces of information … you would expect your authority figures to find this.”

And did the student journos give the object of their investigation the chance to tell her side of the story? They sure did -- though it didn't go so well for Robertson:

In a conference call with the student journalists, Robertson “presented incomplete answers, conflicting dates and inconsistencies in her responses,” the students reported. She said she attended Corllins before it lost accreditation, the Booster Redux reported.

A likely story, huh? By way of follow-up, the Kansas City Star contacted Robertson after the school paper ran its story; she insisted, "The current status of Corllins University is not relevant because when I received my MA in 1994 and my PhD in 2010, there was no issue.” Hmm. So it used to be a terrific school when she "attended" it, but only later turned into a diploma mill? Bummer. Oh, but there's more, of course:

She also said, “All three of my degrees have been authenticated by the US government.” Robertson declined to comment directly on students’ questions about her credentials, saying, “I have no comment in response to the questions posed by PHS students regarding my credentials because their concerns are not based on facts.”

Yep, people resign from jobs all the time when they can't actually scare up their credentials, which are very definitely real. We bet there's a position waiting for Robertson in Betsy DeVos's Department of Education.

And the kids are all enjoying their sudden status as stars of journalism -- Washington Post reporter David Fahrenthold, no slouch at investigative journalism himself, tweeted his congratulations:

So yeah. Hey mom! Big-time journalists noticed what we did! Also, let's give Kansas legislators of an earlier era some credit here: Kansas law actually prohibits school administrators from censoring school journalists, which we're betting isn't a set of protections that were instituted by that state's current rightwing legislature or governor. And now that they've helped uncover some uncomfortable truth and righted a wrong, the students will meet with the superintendent for a personal thank-you session.

Congratulations, you bunch of troublemakers. May you all enjoy your 15 minutes as enemies of the people! Drop by the WonkettoSpere in five or six years and we'll buy you a beer.

Yr Wonkette is supported by reader donations. Please click that "Donate" bar just below the story and we'll get some beer. You know, for the kids.