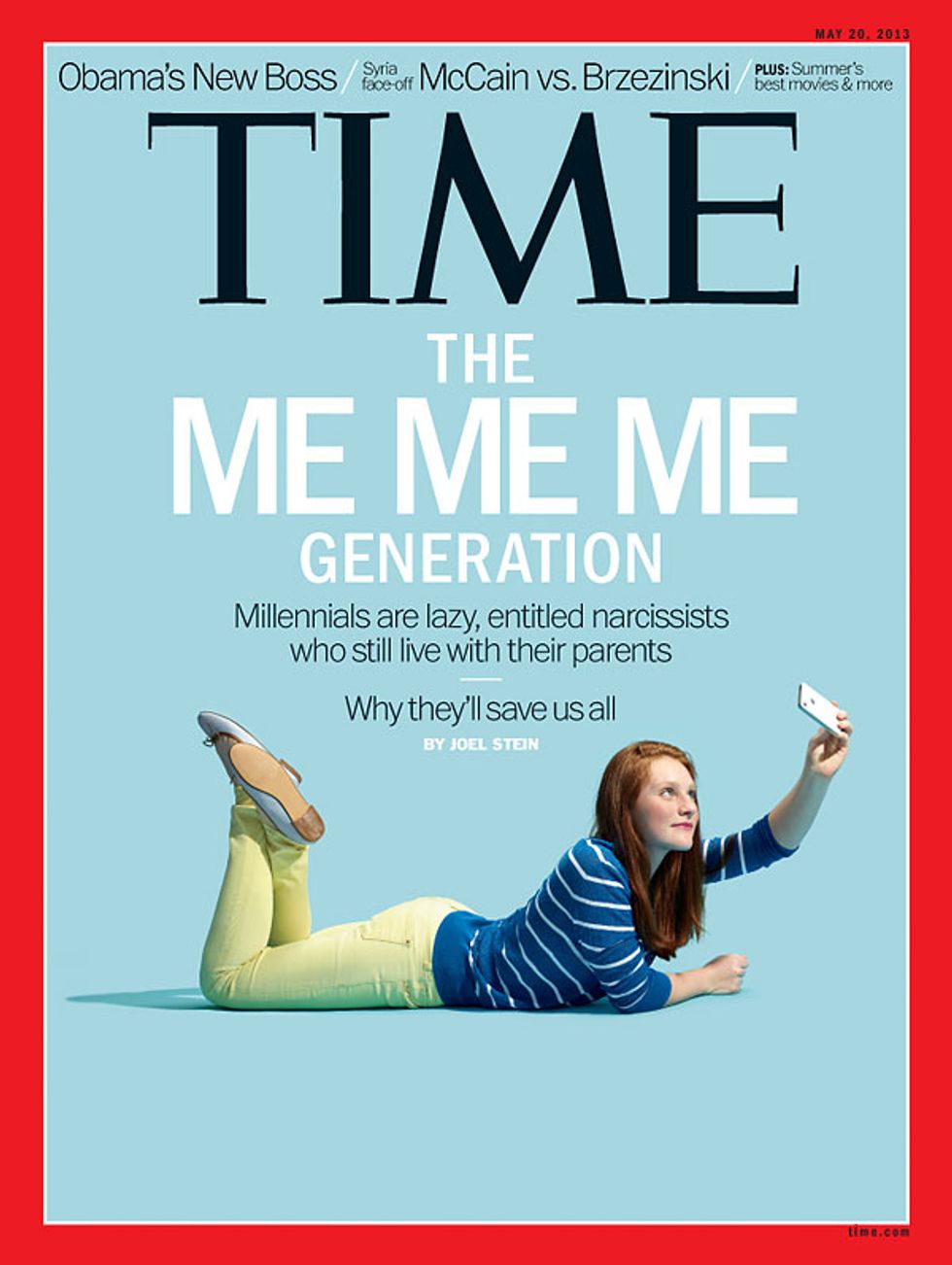 Time Magazine is here to troll everyone with yet another cover story about Kids These Days and Their Lawns (Getting Off of). We have not read it, because Time Magazine. And yet we have decided to debate this Important Issue anyway. Taking the pro-Millennial position will be Rich Abdill (12). Taking the anti-Millennial position will be Rebecca Schoenkopf (40 And Foxy). The child will begin.

OK, so I haven't read this column, because it's in a magazine, which is a product made for old people to drape on their laps whilst they die in waiting rooms. I am, however, familiar with the argument: Ah, kids these days are lazy. In my day, we needed money, we got a job! Congratulations, baby boomers, you were so, so good at life, and now you're complaining because you think the next generation is awful. You know... the generation you raised.

Well, we are NOT awful, thank you very much, and you boomers are the entitled delusionaries who got millenials into this mess in the first place. Here are JUST A FEW of the reasons, because I don't want my debate opponents to lose interest and nod off behind their special reading glasses.

First of all, we're not lazy. You got paid more to do less. Economic productivity has increased more than 240 percent since 1979. Middle-class wages have increased in that time by... 5.3 percent, not taking into account that working hours have also gone up help make up the difference.

But enough about economic numbers! Let's take a gander at the actual jobs that are available — there's no such thing as a "pension" anymore, which is a huge bummer. There is no "retirement" for millenials — there will be only "I am not working anymore." Hopefully you wonderful, responsible boomers will leave a little bit of Social Security for us.

But pensions is jumping the gun: Getting a job in the first place isn't what it used to be either. One has to go to college for four years — incurring, on average, $24,000 in debt along the way — to even get a job answering phones. Money the boomers got to spend on a mortgage down-payment and a nice Buick or whatever is now being spent on four years at college, which is then used to get a job that will hopefully help pay back the college loans.

Congratulations, boomers, you did SO WELL getting started in a job market in which you didn't have to compete against women and black people.

And don't forget, the "full-time" jobs we have now average around 160 hours a year more than they did when you first got one.

"Well, don't go to college if you can't afford it," the boomers also say, before turning around and only hiring college graduates. Though the price of college could conceivably hit a tipping point one day, hourly wages of the bottom 20 percent have actually gone down since the '70s, and attempts at raising minimum wages is "KILLING JERBS," so it doesn't make a whole lot of sense to resign yourself to spending 20 years at McDonald's and never make more than $8.25 an hour, if one can help it.

The bottom line, you grumpy old bastards, is that the world in which you succeeded does not exist anymore, even if that world was only 15 or 20 years ago. "Putting yourself through college" is different, now that college costs more than a Coke, and it's laughable to suggest it's easy to find a job in a wrecked economy you guys were supposed to be running this whole time. It's not a "generational" thing, it's a "math" thing, and the bootstraps you pulled yourself up by are long gone.

But thanks for raising the interest rates on my student loans. That'll show me.

Sorry, what? I was not listening, because I have learned to tune out whiny-ass tittybabies, LIKE A MOM!

Someone need a ba-ba, little baby? Somebody need his dipeys changed? OR WE GUESS YOU DO NOT, because obviously, as a Millennial, you still live with YOUR OWN MOM, and it is her job, not ours. We have our own whiny-ass tittybaby to feed and clothe and wipe, thankyouvermuch. Also: TO GO TO JOB INTERVIEWS WITH because you guys are SO FUCKING LAME.

Mostly the reason we did not read whatever snarling mess of TL;DR that you wrote is because you seem to think that we are a Boomer. GO FUCK YOURSELF. We are tail end of Gen X, and therefore YOUNG AND SEXY.

So, we know you guys do not have jobs. That is OUR BAD. (Well, it is the Boomers' Bad. SCREW YOURSELF, BOOMERS.)

But if we have to read one more OUTRAGED TWEET about how unpaid internships are SLAVERY, we will burn down the Internet. We worked AND did internships WHILE taking six concurrent classes, and now we go talk at USC and ask the journalism students if they want to come do PAID internships at Wonket where they will actually get to write, and then they email us and are like, "oh, sorry that is not enough money, whoops." GO SCREW, ENTITLED MONSTERS.

GEN-X IN THE HOUSE!

Sorry, what? We weren't paying attention because the whine of the wahhhhhmmmmbulance was so loud. Listen, special snowflakes with helicopter mommies: GET OVER YOURDAMNSELVES. You are the whiniest of all possible worlds because you likely have late-era Boomer-born parents who coddled you and taught you how special you were and called the school when you got a B and explained how you should really get an A and we do not like that one bit, nosiree. No one taught us we were special! All we have to point to as our cultural identity is that stupid Douglas Coupland book about us and that is not special!

Consolation prize, big babies: we will totally join with you to hate on Boomers if you would like to do that? We can come together, bridge this gap, span this divide and agree that those fuckers took all our resources and now vote GOP, so put on your big boy pants and help us fight the real enemy: the olds.

But also, Millennials? STOP WEARING HATS WITH ANIMAL EARS YOU ARE NOT MAX IN WHERE THE WILD THINGS ARE, YOU ARE ALMOST 30 YEARS OLD.

Jesus. Just because the Boomers stoled all the jobs does not mean you get to act like you are four forever. Gross.

Just stop being twee and listening to soft music like Sufjan Stevens or Fleet Foxes or any of that and maybe we will listen to you but probably not because we will be playing Fugazi to drown you out forever.

Also, too, shut up because you have WEALTHY parents. You have the kind of parents that yell at those of us toiling as adjunct professors about how hard it is to pay for school because they cannot put it on the AmEx to get the mileage points, and then we have to do deep breathing exercises not to murder everyone because we are making approximately negative eleventy dollars per hour to teach you people.

ME AGAIN By Rebecca Schoenkopf

Also we had a Millennial intern once when we were the Boss of the Newspaper, and she was great and creative and a self-starter and a good writer, and EVERY DAY I had to call her into my office to explain she could not yell at her boss, the Arts Editor, because it didn't matter if he was "stupid" SHE WAS NOT ALLOWED TO YELL AT HER BOSS. And then she would go yell at him more, because Millennials think they are the boss.

Also, our little brother once turned down a job that would have paid him $40,000 a year plus commission, because HE WOULD HAVE HAD TO WEAR LONG PANTS. So he just didn't show up.

DID SOMEONE SAY SOMETHING ABOUT BOOMERS? By Doktor Zoom

Doktor Zoom is unavailable for comment as he is off somewhere having his prostate tended.