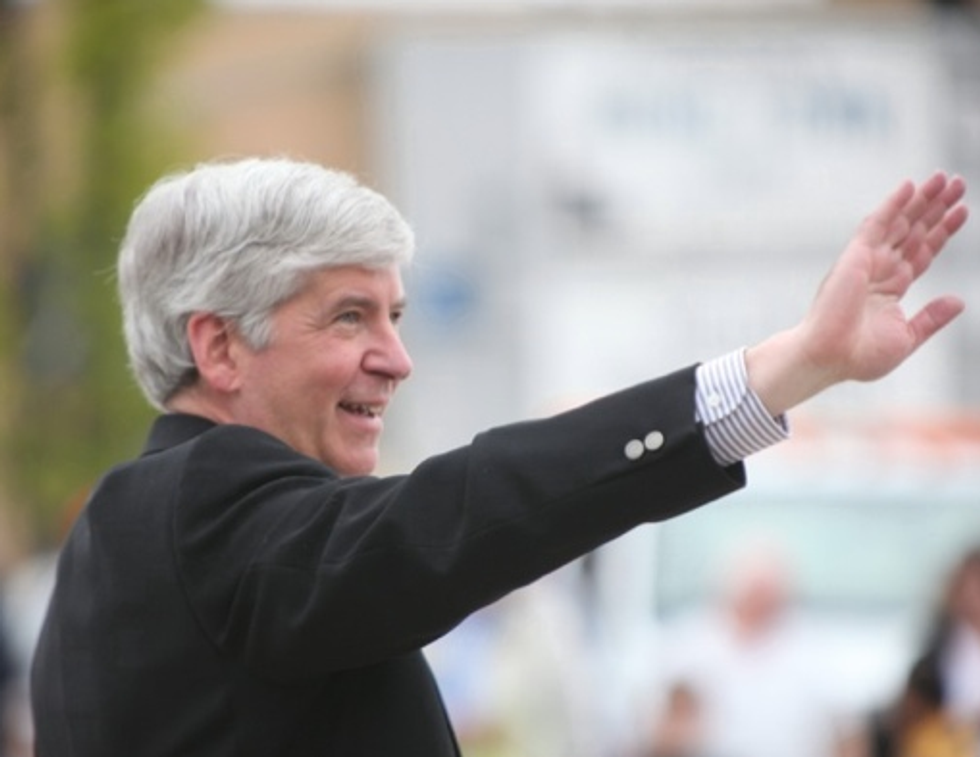 Dennis Schornack spent three years as a senior adviser to jellyfish Michigan GovBot Rick Snyder before retiring in 2014. On Monday, he became one of the first administration members to criticize Snyder's role in letting tainted lead sludge flow to the faucets of Flint residents.

Schornack thinks Snyder is pretty all right for the most part. But in hindsight that's just a tad hundred days late, he isn't so sure about the system of governance Snyder brought from the private sector.

"It's sort of a single dimension for decision making; thinking that if it can't be solved on a spreadsheet, it can't be solved...Government is not a business...and it cannot be run like one,” Schornack said. “The people of Flint got stuck on the losing end of decisions driven by spreadsheets instead of water quality and public health."

This is a not so surprising look behind the curtain. The entire GOP “run government like a business” model is obviously a total sham. Like repeatedly showing toddlers Disney princess movies or teaching tweens abstinence-only education, some people might view it as a fine idea on paper, but in the end all we end up with is a bunch of messed up children.

[contextly_sidebar id="6FrsaU0oWUnB5DPWnDxr2RH0M59CT185"]However, Rick Snyder is not shy about taking personal responsibility for denying his own culpability for the crisis that definitely didn't start when the governor's appointed emergency manager unilaterally decided to switch Flint's water source to the corrosively unfit Flint River because the free market said that was the best option. He sees it differently:

"It's not a business model" that led to the Flint water crisis, but a small group of career civil servants who lacked common sense, Snyder said.

[contextly_sidebar id="m6hfFtfO3xn5czNednXtRGaF5N4rP1rp"]You guys hear that? It wasn't that the Snyder administration ignored a marginalized, poor, and largely black constituency. It's just the bloated bureaucracy of government isn't equipped to handle emergencies like these (except when, say, promptly delivering water to state offices in Flint way back in January 2015). But please proceed, governor:

"This shows a culture of, 'Here's a regulation; let's just apply the regulation,' instead of 'Let's worry about someone's health.'"

We have a culture too, and it's imploring us to send all of the ever-loving fucks in Snyder’s general direction for this shameless retort. There are plenty of regulations limiting the amount of lead in water. And while it's true that state and federal agencies could've been more vigilant, the buck literally stops with Snyder and his gaggle of wannabe shrewd corporate bean counters, since the emergency manager system that was employed to run Flint is totally undemocratic. And when you're only accountable to a man who only knows a city by its Excel row number, it's pretty easy to totally disregard the health of everyone in Flint to save a few bucks. Jesus. No wonder nobody has seen a Gateway computer since 2004.

But as the U.S. Department of Health and Human Services arrives in Flint to examine ANOTHER potential health concern, can we be sure that "Big Government" won't be poisoning people with their testing kits? After all, per the state's CEO, it was the career civil servants who failed Flint with their culture. Not the detached fuckwit governor, his ass-covering staff, and his merry band of unelected local dictators who continued to let the people drink pipe-corroding liquid because the spreadsheet told them to.