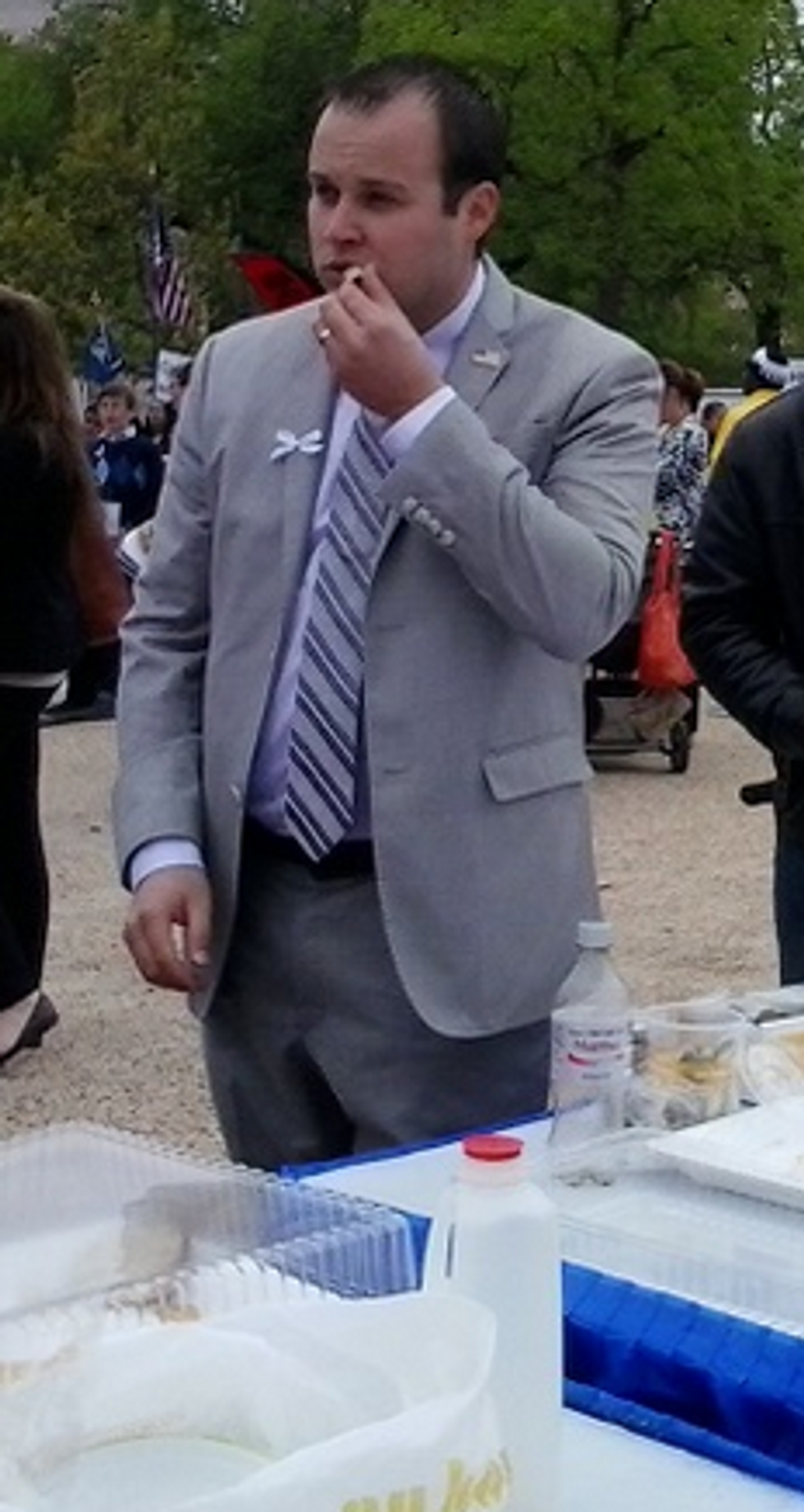 This story has been updated with news of Josh Duggar's resignation from the Family Research Council, see below.

Wednesday, Wonkette reported that Josh Duggar, who now works for the anti-gay Family Research Council hate group, had been accused of maybe sex criming a minor, when he was 14. Wonkette used a lot of "allegedly" in our report, because there was a lot that hadn't been confirmed, and people sure do hate the Duggars, with good reason. However, InTouch Magazine, which broke the original story, obtained a copy of the 2006 police report on Josh Duggar through a Freedom of Information Act request (FOIA) and boy howdy, it's a lot grosser than we thought.

InTouch reports that Duggar was "investigated for multiple sex offenses — including forcible fondling — against five minors." FIVE. And how many of the victims were his sisters? That would appear to be FOUR. The police report states that "the alleged victims are [redacted] and they live with their parents, Michelle and Jim Bob." Good redacting, but unless Michelle and Jim Bob have children who are somehow not Josh Duggar's sisters, that means he molested his sisters. The report states that he "had been fondling [redacted] breast and vaginas when they were sleeping, from the time [redacted] was [redacted]. They said that [redacted] also admitted to fondling [redacted] outside the home on her breasts."

The fifth victim was reportedly babysitting at the Duggar home when the incident occurred.

Jim Bob knew [Jim] Hutchens personally. Hutchens did not take any official action and instead gave Josh a “very stern talk.” As In Touch magazine reports exclusively in this week’s issue, Hutchens is now serving 56-years in prison for child pornography. He took no action on the Duggar case.

We guess that stern talk was something along the lines of "Don't Diddle Kids Ever Again!" (Wink Wink).

Though the Duggars reportedly originally claimed that Josh was sent to "some type of rehab place for 3 months" in 2003, it would appear that it wasn't a real rehab, but rather, according to Michelle Duggar, "a family friend." According to In Touch:

He said the program was a “Christian program.” Michelle Duggar later admitted to police that Josh did not receive counseling and instead had been sent during that time to a family friend who was in the home remodeling business.

Asked about the training center that Jim Bob said Josh was sent to, Michelle told police, according to the report, “it was not really a training center. Det. [Darrell] Hignite asked if the guy [redacted, Josh] talked to was a certified counselor. She said no. She said it was a guy they know in Little Rock that is remodeling a building. Det. Hignite asked if the guy was more of a mentor. She said “kind of.”

Because that's what you do when your kid is diddling his sisters. It's unclear just how old the girls were at the time, though from the interviews contained in the police report, they seem at least young-ish. One victim reported that she loved "princess stories and adventure stories" and that her favorite subject in school was Spelling, which tends to cut off after elementary school, as far as we know, though we admittedly do not know what the Duggar homeschool curriculum is like. Another victim said she loves coming up with new recipes, and yet another described her breasts as a "private area," so it seems they spanned a range of ages.

The investigation appears to have lain dormant until 2006, when the Duggar family was in Chicago for a taping of the Oprah Show. At this time, apparently, a letter, written by an "undisclosed person," was discovered in a book the Duggars had loaned to a fellow church member. The victim describes sexual molestation that happened three and a half years prior. Also, while in Chicago, a letter was sent to Harpo Studios in Chicago, encouraging the Oprah staff that the Duggars are "not what they seem to be."

During the 2006 investigation, Jim Bob and Michelle Duggar recounted their version of what had happened. For the sake of not typing "redacted" at you eight million times, here, have some more screengrab:

So Mama and Papa Duggar knew all about it.

People make a hell of a lot of jokes about how people like the Duggars, these cloistered off people who adhere to rigid, bizarre, fundamentalist religious beliefs on sex and sexuality, often are those with the most to hide.

In this case, that seems to be at least partly true. And how grotesque that Josh Duggar now makes his money shilling for a vile anti-gay hate group that accuses gays and lesbians of being pedophiles, child abusers and worse. Perhaps they should clean their own house.

Oh, and Jim Bob and Michelle? Maybe you should stop trying to have more kids. It seems the Lord has already given you more than you can handle.

UPDATE: In the wake of these revelations, Josh Duggar has resigned from the Family Research Council, issuing a statement expressing regret over his actions, and stating that "In my life today, I am so very thankful for God's grace, mercy and redemption." Jim Bob and Michelle Duggar also issued a statement, saying that that time in their lives was shocking, their family is not perfect, but that the experience brought them closer to God:

"It is one of the reasons we treasure our faith so much because God's kindness and goodness and forgiveness are extended to us – even though we are so undeserving. We hope somehow the story of our journey – the good times and the difficult times – cause you to see the kindness of God and learn that He can bring you through anything."

With additional reporting by Beth Ethier