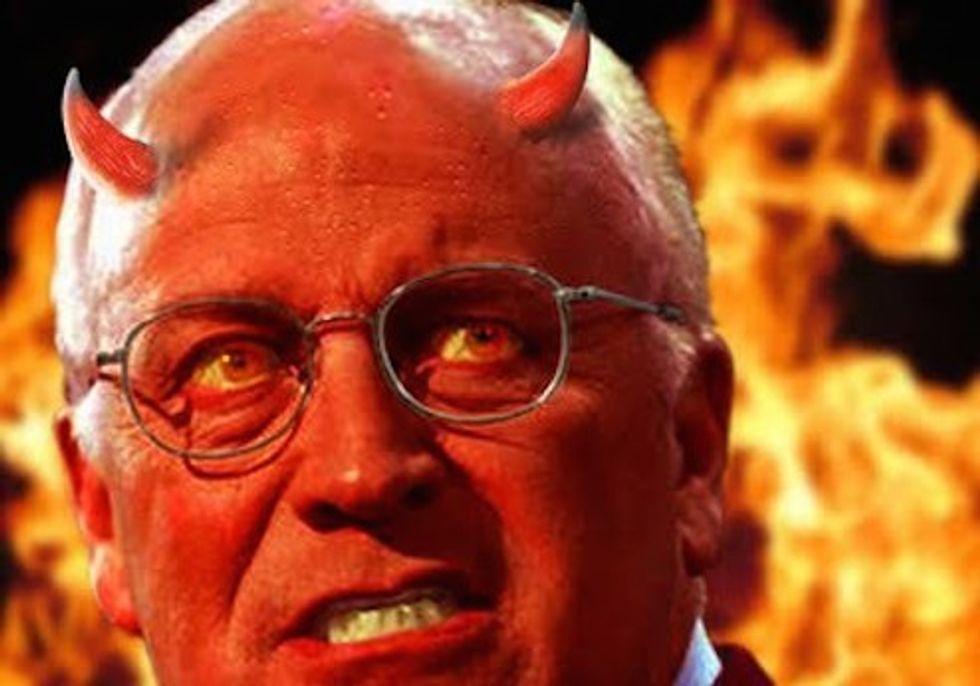 Politico, which is a publication we all still have to pretend isn't just a retrograde mouthpiece for dickheads, gave human death's head mask Dick Cheney, his bride of satan, Lynne, and his chip-off-the-old-demon Liz (the gay offspring wisely declined to attend) a lunchtime platform to spew some nonsense and hate about oh, so many things really. You have to hand it to the Cheney family. Their hatefulness is really really well-rounded.

You know that Dick is all about explaining how great going to Iraq and killing a couple hundred thousand people and spending trillions of dollars was, but we'll work up to that. Let's start with a little appetizer from Liz about how global warming is just a dirty liberal lie. It's weird that she is able to actually talk while gobbling coal Koch quite so hard, though.

On one occasion, Liz Cheney was asked what the Republican Party should do on climate change. “Nothing,” she said, adding that the Obama administration’s climate change policies are a thinly veiled attack on the coal industry. “It is bad policy. It is bad science,” she argued, saying that the growth of bureaucracy and the Environmental Protection Agency is a bigger threat to the U.S. than climate change.

If only we taught little schoolchildren they should value privatization, strip mining, and small government instead of celebrating Earth Day, America would be a better place.

We're actually not sure why Lynne was there, as she didn't seem to want to pimp her new book, which we thought was the only reason she was crawling out of her crypt these days. Her role seemed to be limited to assisting Liz in refusing to talk about how terrible the rest of the Cheney family is to their gay kid/sibling. Good job, mom.

All right, all right. You've waited long enough. What did Dick have to say that was any more awful than the last time he opened his gaping hell maw? Was it his whining about how the isolationist wing of the Republican party, championed by Rand, Son of Ron, makes him sad? Naw, because we're totally down with Republican infighting. Was it his idiotic throwaway comment about how it is a good thing if Congress does nothing, which is a startlingly disingenuous and absurd statement from a man who basically spent his entire life in the government? Nope, because we know he can do better/worse. Was it how he's pretty sure Hispanics should be Republicans?, No, even though that was pretty stupid.

"I am one of those people who believes that the party ought to be doors wide open for everybody," [...]"And I see a lot of folks in the Hispanic community. Those are people who ought to be conservative — religious. And are here in many cases because they worked very very hard to get here and because they care about those things."

Hmmm. Maybe they don't feel like your party doors are wide open because of how you and your ilk keep threatening to murder them all at the border, basically? Just a thought.

No, to really be awful, Dick had to return to his real roots as a war machine apologist and explain that 'Merica is built for fightin' and that's all, dammit.

Cheney said the next president needs to "turn around the whole trend" of cutting defense dollars.

"That ought to be our top priority for spending. Not food stamps, not highways or anything else," Cheney said. "Your No. 1 responsibility as president is to support and defend the Constitution of the United States.

Thank god we dodged having his daughter hold an elective office. We'd be happy to pay for whatever military funding it takes to ensure that never happens.