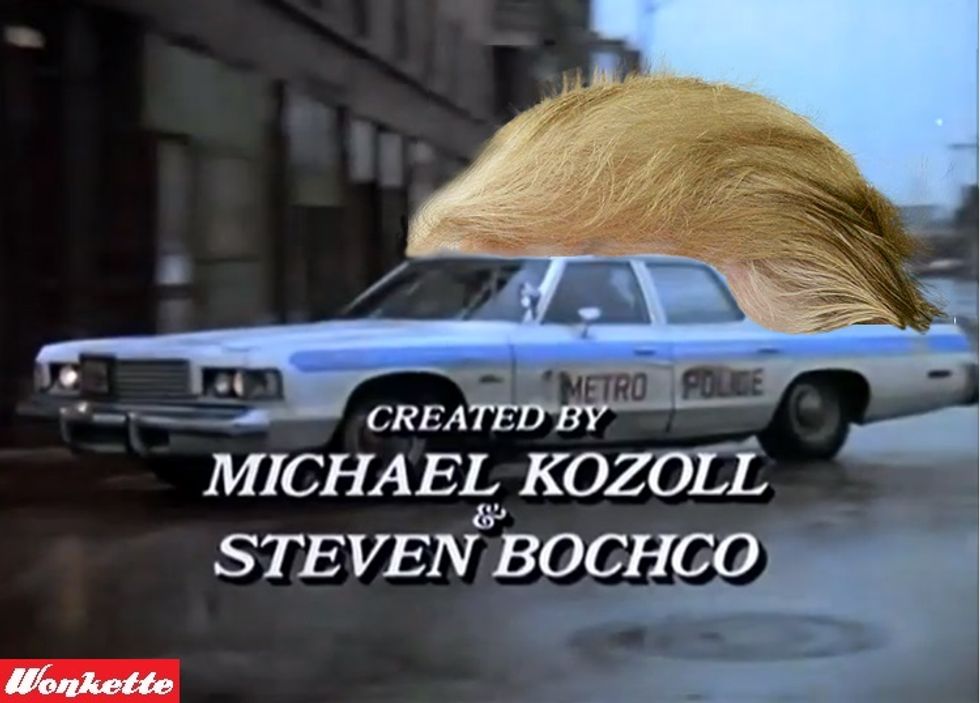 Let's be hairful out there

Donald Trump missed a great opportunity to show how presidential he can be, all because the mean old New York Police commissioner wouldn't let him use cops as a backdrop for a political show. The Trump campaign reached out to NYPD commissioner Bill Bratton, but didn't have any suction (as they used to say on The Wire). Bratton explained the scheme, as a Trump rep tried to set it up, on Sunday's Meet the Press:

Very specifically, one of his security personnel, former N.Y.P.D. personnel, reached out to our department about the potential for Mr. Trump to address a roll call. We turned down that request. We don't allow the department to be politicized. And inasmuch as he has engaged in the political campaign, that would a politicizing of the department.

I had a conversation with Mr. Trump, as well as with Mrs. Clinton later in that day that day, at their request. Both of them called me to discuss New York specifically, as well as the Dallas situation. Very productive conversations. But it's been overplayed in some respects in the media.

See, no big whoop, Trump simply wanted the chance to be photographed in front of a bunch of cops after five cops were murdered in Dallas (Clinton apparently only wanted to talk to Bratton, not play briefing sergeant).

Our interest is staying out of the politics of the moment, and not to provide photo ops ... If Mr. Trump wants to speak to me, I would be happy to brief him on what we’re doing. If Sen. Clinton wants to speak to me, I would very happy to brief her on what we’re doing. But we are not in the business of providing photo ops for our candidates.

Not surprisingly, the Trump campaign denied that anything of the sort had happened, because they simply can't go five minutes without lying:

Trump spokeswoman Hope Hicks sent the Daily News an email statement claiming "Mr. Trump and the campaign did not reach out with a request to address roll call."

Must have been the NYPD commissioner making it all up to make Trump look bad, then. Poor guy can't get a break from the liberal police establishment.

We are somewhat disappointed, if only because we wanted to know whether Trump would have ended the briefing with the classic Hill Street Blues caution "Let's be careful out there," or the tougher post-Michael Conrad phrase "Let's do it to them before they do it to us."