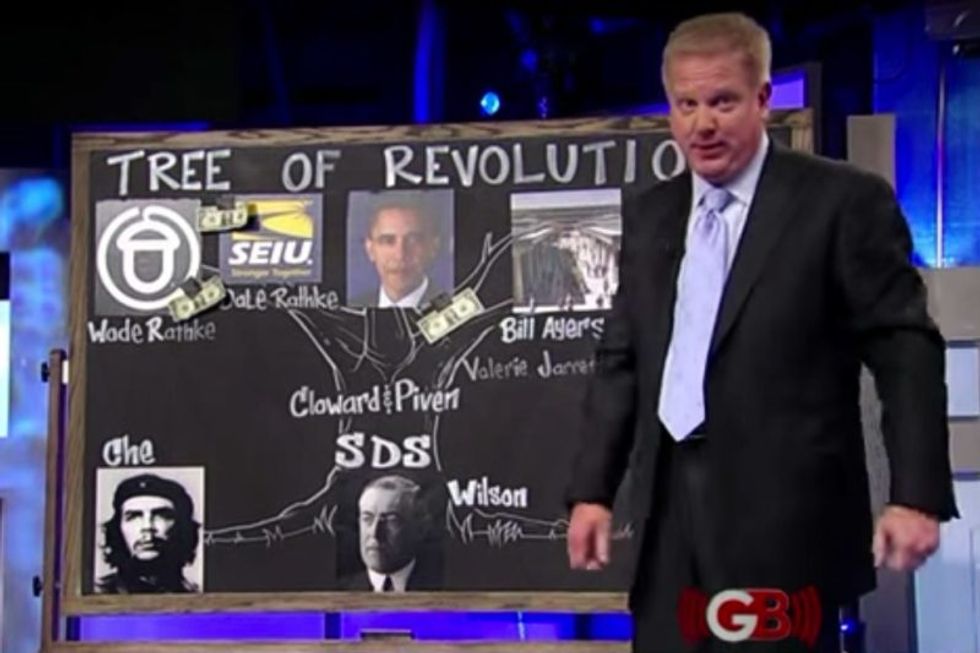 Back in the Before Times, when America hadn't yet become great again through deporting people with Down syndrome and we were burdened with a president who spoke in complete sentences like an elitist snob, a great man named Glenn Beck arose and became the hottest thing on Fox TV. Armed only with a couple of chalkboards and a pocket full of resentments and logical fallacies, Beck warned the angry teabagging masses that Barack Obama, along with ACORN and teachers unions, was on the verge of destroying America from within, with the Cloward-Piven strategy and Saul Alinsky's Rules for Radicals, a book that no liberal has ever read but which rules our every thought. Beck even held a big slob picnic in Washington DC that rivaled Martin Luther King's March on Washington, as long as you use the highest attendance estimate for Beck and the lowest for King, which is only fair to counteract the pernicious effects of affirmative action.

But eventually Beck lost his mojo, especially after the fortieth or fiftieth time he predicted a seismic event in American politics was about to occur and there was no seismic event, not even Beck's crew tilting the camera and running back and forth like on the original Star Trek, and eventually Beck lost his advertisers and his Fox show and nobody was even comparing him to Lonesome Rhodes in A Face in the Crowd anymore, because his schtick just got old. Or maybe George Soros destroyed him. Still, he did build sort of a media network around his The Blaze website, and he even has a The Blaze cable TV channel that is inexplicably still on. But it was less a media empire than a media fiefdom, and now Beck is downsizing. The Daily Beast reports that Beck even has to sell his beloved private jet, which is a reasonably luxurious if aged 1966 Douglas DC-9 executive jet:

The listing for the two engine plane that’s ferried Beck from his home in Texas to New York boasts of “2014 custom paint,” and “2014 airframe and engine inspections,” among other features.

The price is not listed, but it's probably more than any Glenn Beck fans (snrk!) would want to spend to feel close to the fallen master. The financial health of Beck's media prefecture probably hasn't been helped by his tendency to spend money like a common Scott Pruitt:

Employees at The Blaze previously lamented that Beck bought a Maybach sedan and kept his jet -- which was expensive to operate and maintain -- amid massive layoffs at the company in 2015. The jet was purchased by Beck’s radio company, Mercury Radio Arts, that same year from right-wing billionaire Richard Mellon Scaife for a million dollars. It had once been adorned with a skull-and-crossbones on the tail.

Now, though, it looks like a completely anonymous old bizjet that's had a bunch of periodic updates but is propelled by 1960s-designed engines that are hell on jet fuel compared to modern planes. Maybe Beck felt obliged to fly a wasteful old plane, if only to prove climate change is a hoax.

And now Beck is in negotiations to sell his media holdings to Ben Shapiro's I'm Not Whining I'm Just Right internet concern, which would leave Beck as more of a media sharecropper, and isn't it sad that the man who helped pave the way for Donald Trump's political antics is no longer a media titan, o how the mighty are fallen? Look upon his works, ye mighty, and giggle.

Yr Wonkette is supported by reader donations. Please click here to help us buy our own big old jet airliner. Or a bottle of bourbon.