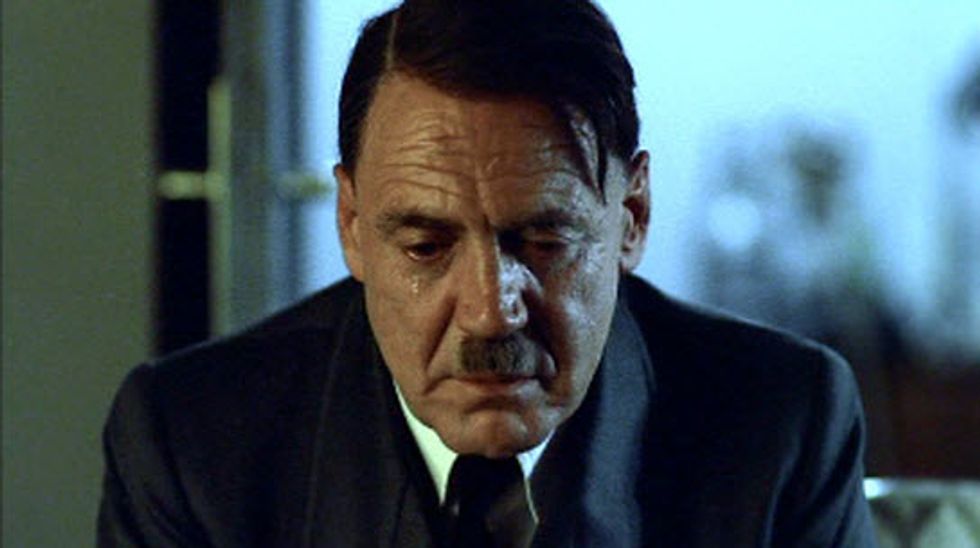 All those 'Downfall' parodies finally took their toll

The Internet is a tough place to make a living, no matter how many times you hear from "Lori" that she earned enough in her first week of spamming to buy a (insert name of luxury/supercar here). Ad revenues are down, and unless you have huge traffic or a very devoted (and extremely intelligent!) reader base willing to send you money, times can be tough in the online world. So we aren't entirely surprised to learn from the Southern Poverty Law Center that Don Black, the former Klansman who runs the no-frills hate site Stormfront, has announced that as of tomorrow, April 6, Stormfront will only be visible to "sustaining members" who donate a minimum of five bucks a month (Bitcoin also accepted, so you can send crypto-currency to crypto-fascists. They'll also take envelopes with cash).

Black is well-known among white supremacists for perennially complaining about the costs of maintaining the site, which he has threatened to close before. This time, his threats appear to be real.

Oh, the poor dear! We took a look at Stoolfront's sad news post so you wouldn't have to. Bulletin Board moderator (or Gauleiter? They don't do anything moderately there) "PrairieSister" explains, in boldfaced red text:

A financial crisis looms at Stormfront. Donations are down. That's partly due to defunding machinations by the "Intolerance Crowd" who hate free speech and White Pride. We don't have enough money to cover the bills right now. Thus Stormfront patriarch Don Black must limit access to this site to Sustaining Members as of April 6. Only those folks who make a donation will be able to read or post here at that time. This is a temporary, emergency measure.

Yes, "Patriarch," why not? So poor beleaguered Don Black's message lets the troops know that he's got the curse -- of low donations:

I appreciate everybody's support. But it's that time of month again, when the big, scary bills hit. Our contributions have once again totaled less than $2000, which is not enough to cover our basic server and radio bills, and this month we no longer have enough personal money to make up the difference.

Sad times, man. That reference to "personal money" covering the shortfall from paying Nazifans is explained thusly by SPLC:

“Don Black’s wife, Chloe, had been working full time past retirement age to help support this site,” “Ruthless” wrote on the thread discussing the temporary restrictions on April 4, 2018. “All of the years that Don posted how much was needed to run this site and all the months that SF didn’t receive enough donations. That difference was made up from Chloe Black’s income.”

Just like a good Aryan woman should do, of course. The site's challenges have certainly been real enough, since a whole bunch of private companies have decided they'd rather not have a reputation of doing business with white supremacists for some reason. Or as Black explains, it's all a plot by shadowy forces bent on censorship:

And even though Stormfront still retains its GeoCities-era bulletin-board format, keeping the thing afloat is a really costly endeavor, Black explained on -- yes, this exists -- "Stormfront Radio" a few days ago:

The [radio] show will continue, but, Stormfront the Website suffers from a financial shortfall and it, contrary to rumors that circulate around that say, "Ohhhh, Don Black could run that website for fifteen dollars a month." Well, I would welcome anybody to try that [...] Don't worry, we're not going anywhere. We'll be back, I just, I need to reduce expenses, considerably.

Deleted Comments Of The Day: The 'League Of The South' May Never Love Us, We Fear

This is taking a considerable toll on Black's time, too, so Nazis better appreciate what their Patriarch is giving up for them. He even has to miss a chance to travel to the annual League of the South conference in Alabama this weekend, "the theme of which is David Duke's and my fiftieth year of activism." Wonkers will remember the League of the South as the very nice folks who used to write us fan mail all the time about how unfairly we characterized their protests against "White Genocide." Or maybe readers needn't feel too bad about the server re-jiggering's time cost to Mr. Black anyway, since he adds, "That would have been difficult for me to attend anyway." You can almost see the tear-stains on his keyboard.

Will Stormfront survive? Depends on how much filthy Rothschild-tainted Federal Reserve currency Black's supporters send him, and as the SPLC article notes, that may be a challenge, since Black's operation has lost a lot of traffic to "sites like the Daily Stormer, the Right Stuff and social media platforms favored by the racist 'alt-right,'" like racist twitter-substitute Gab. But since old hardline racists may still feel some sentimental fondness for the White Power Ranger site they cut their Skoal-stained teeth on, it may be too soon to assume Stormfront is destined for the same fate as the big ol' swastika at the Zeppelinfeld stadium in Nuremberg just yet.

Clearly, those Nazi doofuses need better money management. Or maybe they simply don't have the motivated, thoughtful, and remarkably easy-on-the-eyes readership of certain mommyblogs what don't run ads at all.