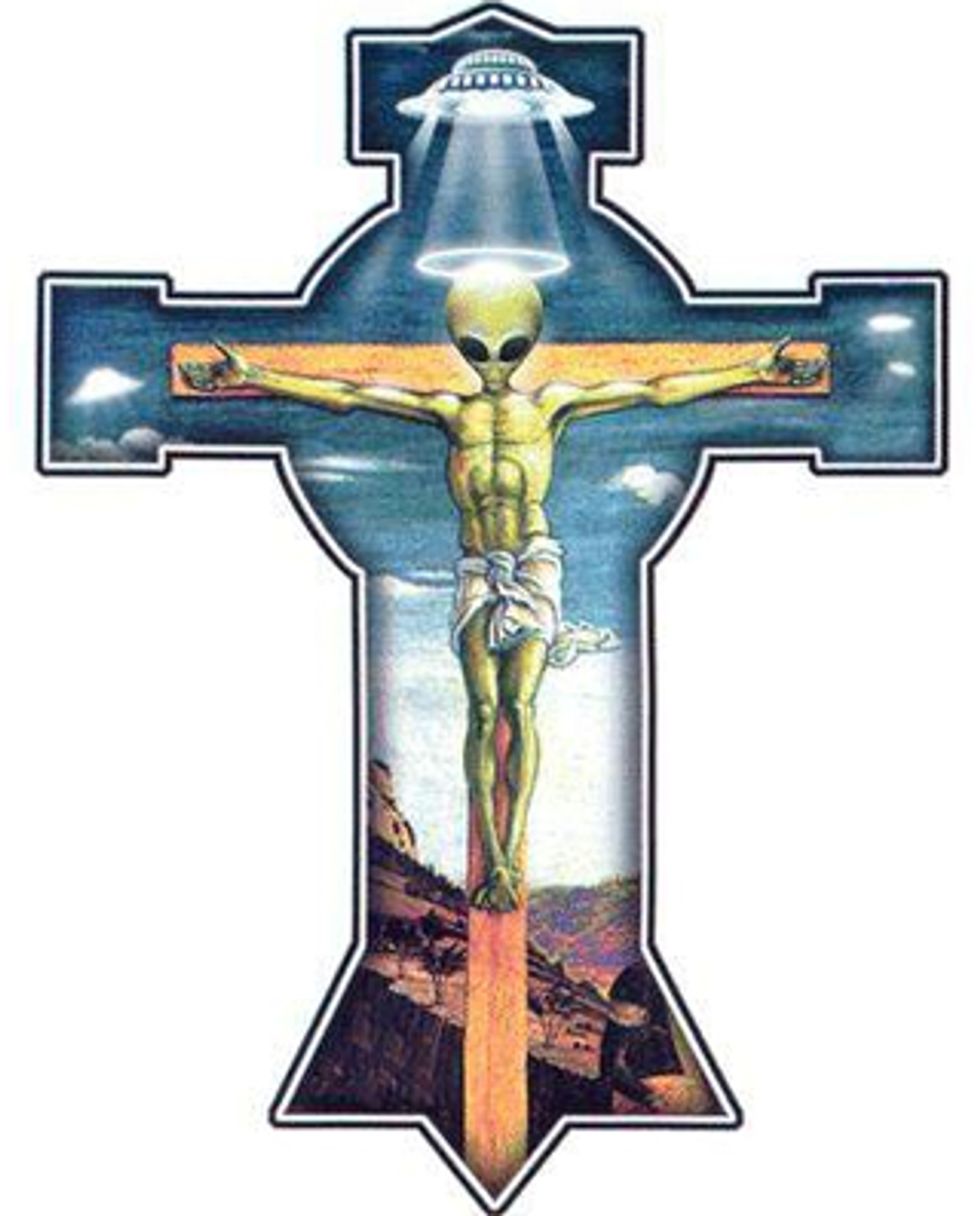 Pope Francis joked --or so they want us to believe -- that he would happily welcome extraterrestrials into the Catholic Church.

“If tomorrow, for example, an expedition of Martians arrives and some of them come to us … and if one of them says: ‘Me, I want to be baptized!’ what would happen?”

We love New Pope as much as ever, but we aren't entirely sure he's thought this through. Like, what if they aren't friendly Little Greys and are instead some nasty H.R. Giger Xenomorphs who are far more interested in a more literal version of sharing our body and blood?

Then again, it could be that the pontiff would insist on screening for kid-friendly aliens, as indicated by his initial musings on the topic:

“Green men, with a long nose and big ears, like children draw,” Francis told worshipers during Mass at his modest Casa Santa Martha residence within the Vatican ...

Christians should never “close the door” to anyone seeking baptism, according to the leader of 1.2 billion Catholics.

In a slightly more realistic scenario, Francis said Monday that all earthly seekers of faith – such as kids of adults breaking church rules, such as living together outside of marriage – must be embraced and baptized.

Oh, so that sounds like maybe its one of those meta-thingies, more than an actual plan to baptize visitors from other worlds? Sure, if he says so. Still, you have to wonder what he's covering up. The Vatican has an observatory, and they are watching the skies.

Also, has Francis even given any consideration to some of the nuances here? If you baptize a Trill, for instance, do you have separate sacraments for both the symbiont and the host? And when the short-lived host body is dying, what are the theological implications of administering the last rites while the healthy symbiont remains inside?

And don't even get us started on the difficulties of trying to translate the Mass into the Tamarian vernacular, in keeping with Vatican II. Even if you could do it, Mass would take all day. Shaka, when the walls fell, man.

And then, of course, there's the very real possibility that the ETs will be much more interested in getting us to convert to their religion, which could make the whole exercise pointless. Or they may just decide to take off and nuke the Vatican from orbit -- it's the only way to be sure.

[New York Post via a tip from Actor212. Or perhaps via the Interocitor.]

Follow Doktor Zoom on Twitter. He couldn't quite find a way to work in a reference to his favoritest religious science fiction story, Arthur C. Clarke's "The Star," so he'll just throw it in here.