Portland Area GOP To Hire Militias For Security, What Could Go Wrong 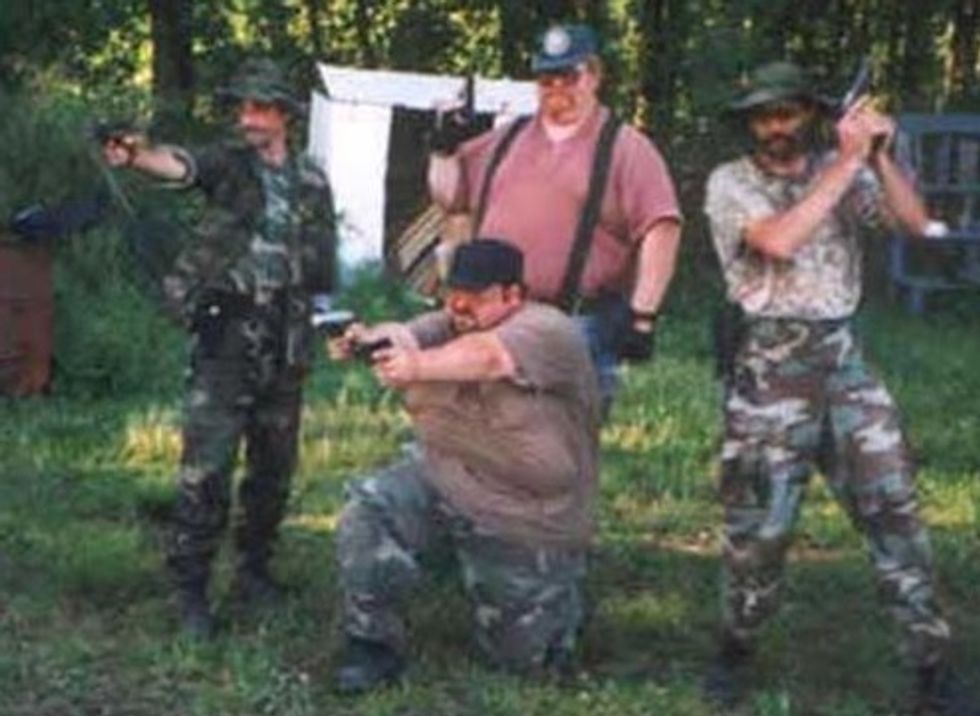 A well regulated clusterfuck being necessary to a good militia story...

There's just one thing the Republican Party in Multnomah County, Oregon, loves more than being the Party of Reagan and Liberty, and that's being the Party of Perpetual Victimhood, because in the overwhelmingly Democratic environs of Portland, they really are outnumbered. So it stands to reason that one way they'd get mentioned in the news is by crying about how oppressed they are. Here's how badly they're endangered by the dangerous leftists in Portland: Last week, the Multnomah County GOP voted to hire anti-government paramilitary groups, the Oath Keepers and the 3 Percenters, to provide security to keep them safe from radical anti-fascist (antifa) protesters. What could possibly go wrong?

Portland managed not to have a riot, not that plenty of people weren't itching for one.

James Buchal, the chair of the county party, has been fundraising off the specter of violent leftists targeting poor oppressed Republicans; a June fundraising letter expressed sympathy for the poor oppressed "supporters of President Trump" who brought their message of love and white supremacy to Portland, and also warned that "Organized bands of masked thugs who call conservatives fascists or Nazis are rising rapidly within the City." So obviously, the only reasonable thing to do is to hire some militia dudes to provide security for the local Republicans.

Buchal explained to Willamette Week that his party is just doing what it can to keep its membership safe from scary leftists, who all wear masks and are looking for a fight. And really, there's nothing wrong with hiring some gun fetishists who look forward to a shooting war with the federal government -- but only if the feds are tyrants, mind you. So why hire militias instead of plain old security guards? Buchal explained,

Because we are an all-volunteer organization with no money. So if we are going to get security services, we are going to get them from volunteers. And people who volunteer to provide security services to Republicans are generally going to be people who share the view that the government has developed an unconstitutional overreach of power, and that it is a reasonable political objective to attempt to rein government in.

Buchal wasn't worried about the groups' reported involvement in the Great Bundy Wildlife Refuge Liberation, because as he understands it, "the Oath Keepers down there were keeping the peace." Besides, he rejects the premise of the reporter's question, because these groups aren't "inherently lawless" -- they're local guys who just object to government overreach.

Asked why it was necessary to have a paramilitary group with semiautomatic weapons for security, Buchal explained there's been "sort of a continuous escalation" of threats against the county GOP, including incidents at a street fair where Republicans felt unsafe, the threat that they'd be dragged out of a local parade, and threats on Facebook. He also said that he's received phone calls from people who "call you up and they have this screaming demonic tone in their voice," and that the group had been asked by a local restaurant to no longer hold their monthly meetings there. "I heard about it all secondhand. I inferred that they had come under pressure." So if a local business decides it doesn't want you to have meetings there, it's obviously time to arm up.

Buchal also denied that the "alt-right" groups that have held rallies in Portland are neo-Nazi, no, no, no. For instance, at the June 4 "Free speech" rally,

You know things are weird when Pepe The Frog fans accuse the Gateway Pundit of being a mainsteam sellout.

For what it's worth, several of the same "alt-right" speakers who were at the June 4 rally also attended the recent DC event headlined by Richard Spencer, where speakers got loud applause for saying that diversity is simply code for anti-white. But if they didn't say it from the stage in Portland, then that was definitely a non-Nazi rally.

As for whether there's an element of racism in the "alt-right," Buchal had his patter perfectly ready to roll out:

The left and the right may have a somewhat different definition of racism. I have the impression that many on the left would regard any defense of American exceptionalism as inherently racist. I think it is possible to defend Western culture without being a racist.

No racist, no racist, YOU'RE racist against flag-Americans! And so on.

While Willamette Week says the Multnomah GOP has more explicitly embraced rhetoric typical of the "alt-right" since Buchal became chair in 2015, the county party is pretty adept at stunts calling attention to how oppressed they are. In 2014, the party was denied permission to hold its annual Lincoln Day Dinner at a Greek Orthodox church when party leaders announced they'd be celebrating two great Republican heroes, Abraham Lincoln and Martin Luther King (who wasn't actually a Republican in life, but has been enlisted posthumously) by raffling off an AR-15 semiautomatic rifle. Which seems a perfect way to celebrate two great Americans assassinated by armed countrymen. After being booted from the church, then-chair of the Multnomah GOP Jeff Reynolds sniffled, “candidly, this is what Republicans face in Multnomah County,” which sure sounds familiar. The poor outnumbered dears.

Yr Wonkette is supported by reader contributions. Click the "Donate" clicky so we can upgrade our bunker.