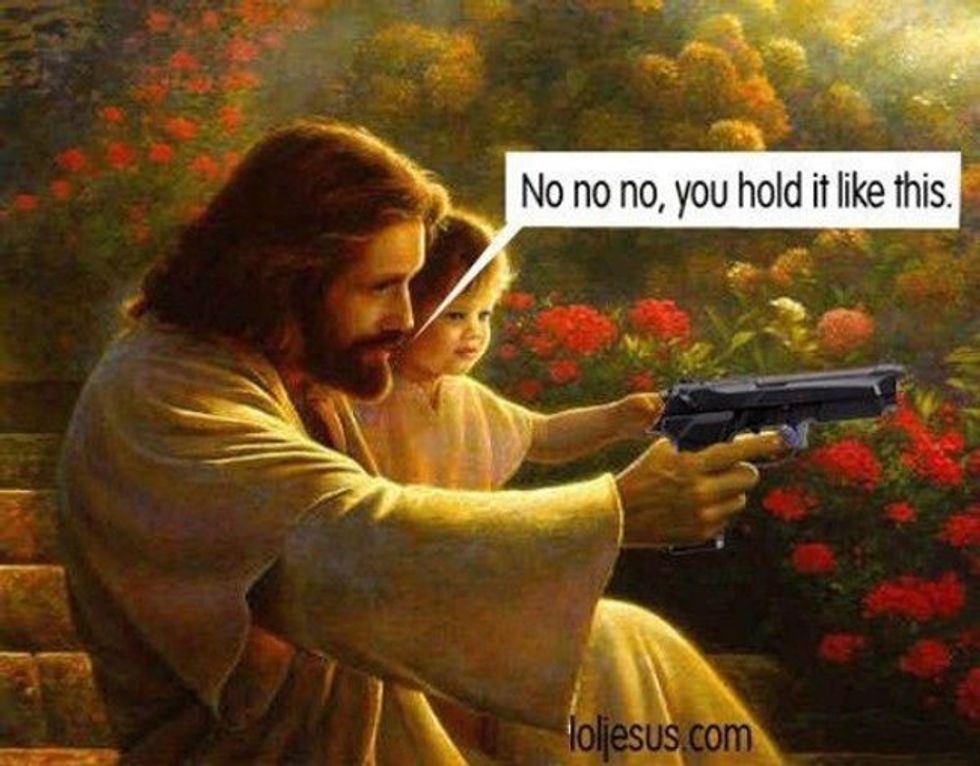 Locked and Loaded for the Lord

Nothing says America like guns, Jesus, and lawyers. In one hand, a bloody palm wrapped in a rosary grips a court order that tells you people can't step on your God-given freedoms while the other hand is full of all the pew-pew-splodey stuff that defines America, like rock and roll, cheep beer, and eagles. But what's a good, god-fearing Christian nation to do when the vessels of God try to test our faith by destroying our guns? Are you there, God? It's me, America!

The patriot gun fetishists of suburban Portland are now not only battling hipsters, hippies, and homeless youths, but now they also have some Jesus-freak who wants to take A GUN away from the masses! That man, the Rev. Jeremy Lucas, thinks he can just do whatever he wants after he gets control of a gun, like melt it into a crucifix, or an ashtray, or something that can't be outfitted with a hair trigger to fire 60 rounds a minute. The nerve of some people!

Lucas had read a report about a girls softball team trying to raise a couple thousand dollars to afford a trip to their regional play offs in Lancaster, California. Someone had the brilliant idea of raffling off a an AR-15 to pay for the cost of the trip. Being a man of the cloth, Lucas figured that giving away a gun was probably a bad idea, so when he couldn't buy the gun outright he dipped into his church's discretionary coffers and bought 150 of the 500 raffle tickets (or $3,000 worth of indulgences).

"...This gun will never be used to kill kids in schools, kill people in a movie theater, kill people at an office party or at any other place of mass shootings. … It won’t be used by a vet with PTSD to kill himself. If I had the chance for $3,000 to keep any of these things from happening — even one time — I’d do it again in a second."

Of course, the auction was conducted LEGALLY, and the little league players, aged 14-18, who sold the tickets for $20 a pop were told to only sell the tickets to people who could legally buy a gun, and that anyone who won would have to pass a background check. A district manager for the team, Georgia Herr, saw nothing wrong with using teenagers to sell an assault weapon...excuse me, "semi-automatic rifle", because this is America!

"This is still America, where I believe we are free to pursue our own joy...For those who have the money and resources to shoot rifles, I believe they have as much of a right to do so as those who spend their time chasing invisible Pokémon."

Yeah, thank goodness a Charmander is only a make-believe fire lizard, Heaven forbid it might accidentally burn down a village somewhere in Not-America. But, since God works in phantasmagorical ways, Lucas won the raffle.

“I’m not sure that’s exactly how God works, fixing raffles...I like to believe I took a faithful stance. But I think that God would have been on my side even if I didn’t win, because we helped send a girls softball team on their trip.”

And it would be nice if the story ended there, which it would have if it weren't for the ammosexual patriots who were just so mad that Lucas used a rudimentary understanding of statistics to win a raffle contest just so he can take a defenseless gun out of circulation! Naturally, they took to their safespace, the Internet, and started trolling Lucas on social media and news websites.

As usual, the gun fetishists cited the most often touted statistic that, according to the most recently available FBI data, murders involving assault rifles are substantially lower than those where someone is beaten to death with bare hands, a blunt object, or a knife. Of course, this also glosses over the fact that 8,000 out of almost 12,000 murders in the U.S. involve fire arms, and that this data hasn't taken into account mass shootings in Orlando, Dallas, San Bernadino, or Seattle. God damn math!

In an ironic twist of fate, the gun-loving Oregonians realized Lucas may have violated the state's background check law when he gave the gun to a friend for safe keeping, a misdemeanor crime that carries a fine of up to $6,000, and/or up to a year in jail. Kevin Starrett, head of the Oregon Firearms Federation, stated, "If the pastor is not prosecuted, it will demonstrate that anti-gun liberals are above the law and it was only intended to hurt the average gun owner, against whom it could be selectively enforced.” Starrett also forgets that anti-gun liberals can just use their secret emails to ascend above prosecution.

However, Lucas, who has received $3,000 in donations from supporters since the story went public, isn't too worried because he was a lawyer before he went and had his bro-mance with Jesus. Lucas says that he's glad the whole ordeal is bringing publicity to the heretical idea of gun control.

“Anything that can keep us talking about this patchwork of gun laws and gaping holes that we can drive through is good. I mean, it took me less than half an hour to pass that background check and walk out with a semi-automatic rifle. We really should be talking about that."