Powerpuff Girls Are Back To Tap Dance On MRA Bullies' Faces! Your Saturday Nerdout 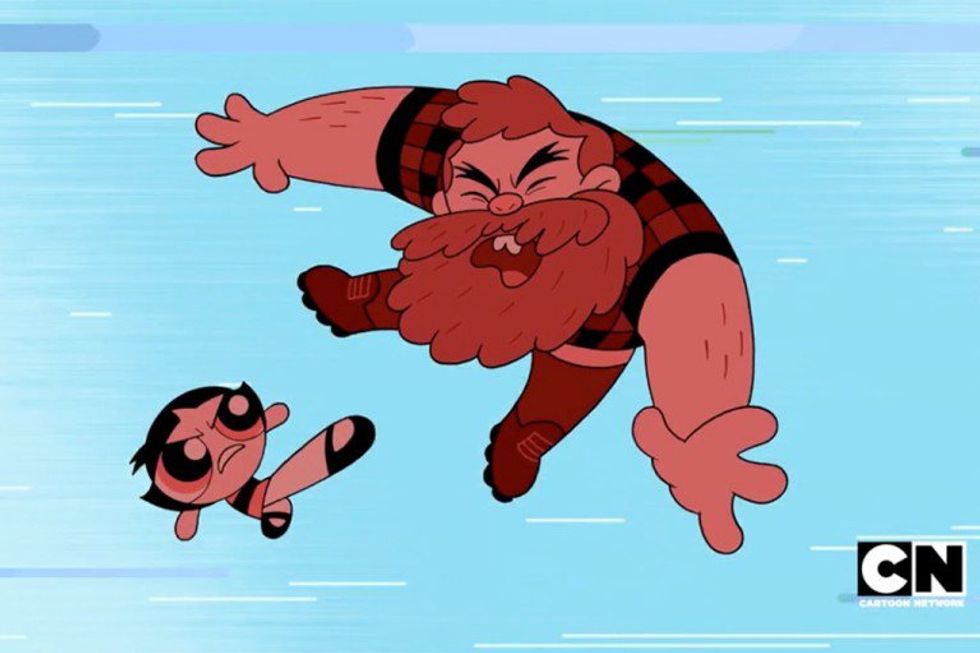 You really don't want to call her "Princess"

Good gawd, y'all, the Powerpuff Girls are making a return to Cartoon Network, and the first teaser clip has Buttercup beating up a Male Supremacist Pig. We are in love all over again. Also, can Gravitational Waves Improve Your Sex Life, or are they only good for deceptive clickbaity headlines? The world may never know! It's Saturday, and that mean it's time to get your nerd on. If you feel the universe move, please let us know.

Lookit! Lookit! The Powerpuff Girls are making a return to TV -- new episodes, with a new voice cast, but a very familiar look. Here is your teaser clip, in which Buttercup will not have a masculinist jerk talk down to her. Also, if you like watching people be idiots on the internet, you can hop on over to JunKee for the delightful comments, in which a bunch of MRAs whine that it's TOTALLY NOT FAIR to describe the villain here as an MRA, possibly because at no point does he utter a single word about ethics in games journalism.

Gravitational Waves: Albert Einstein's Latest "Told Ya So" From The Beyond

As we learned several times while trying to summarize Neil DeGrasse Tyson's Cosmos reboot, our liberal-arts-background enthusiasm for science is frequently not quite the same as understanding it well enough to explain the stuff. We get as far as saying "Oh, wow, that is so cool!" and then start tilting our head like a puzzled Labrador retriever. This is kind of where we are with this week's announcement that researchers have confirmed the existence of gravitational waves, which is quite the big deal because it confirms one of the squirrelier parts of Einstein's general theory of relativity, which we already just barely get in the first place (thank god for explainers like Carl Sagan, NdGT and cartoonist Randall Muroe).

Because we don't want to spent the whole day typing and trying to summarize stuff that Real Science Writers have already done a bang-up job on, we'll refer you now to this terrific New Yorker piece on how the scientists behind the Laser Interferometer Gravitational-Wave Observatory (LIGO) actually confirmed they were detecting gravitational waves caused by the collision of two black holes a bit over a billion years ago. As the subtitle of Popular Science used to proclaim in the 1930s, it's "Written so YOU Can Understand it!" Which is not to say it's dumbed down, but get ready so say "Wow" a lot anyway. And for those of you who like tilting your heads, here's another PBS explainer:

Science is hard! Look at this smart doggie!

No, really, we do get science. Honestly we do. For instance, look at this beautiful example of a yard-bound dog who has trained passing humans to play with it: Operant conditioning at its best! And no, we don't care that it was posted to YouTube in 2014; we just found it, so it's new.

We also don't care whether this Psychology Today piece on why Ted Cruz's creepy face makes good decent people recoil in horror is actually a political hit piece masquerading as science. It certainly seems sciencey enough for us. Neurologist Richard Cytowic starts with the fairly straightforward observation that "The Senator’s atypical expressions leave me uneasy" and goes from there, noting that nobody likes Cruz all that much, even people who agree with him, and positing that part of the problem is that Ted Cruz's face simply doesn't behave like humans expect a normal human face to work:

I have rarely, if ever, seen a conventional smile from Senator Cruz. In a natural smile the corners of the mouth go up; these muscles we can control voluntarily as well. But muscles circling the eyes are involuntary only; they make the eyes narrow, forming crow’s feet at the outside corners. Even the Mona Lisa’s smile shows this. The eyes give away one’s game and let us tell forged from genuine smiles. Grandma may have told you to put on a happy face, but you can’t if it isn’t heartfelt.

No matter what the emotional coloring of Senator Cruz’s outward rhetoric is, his mouth typically tightens into the same straight line. If it deviates from this, then the corners of his mouth bend down, not upwards. The outside of his eyebrows bend down, too, when he emotes, something so atypical that it disturbs me. Typically a person’s eyebrows arch up, as does the corrugator muscle that furrow the forehead. What is such a downturned face signaling?

[contextly_sidebar id="2TqJmt8UNWGcXQmQfdFu8BZ1xQprUlVS"]So yes, there is something atypical and freaky going on with Ted Cruz's face, and it's not simply because it looks like God's.

Cytowic's piece reminded us of a classic essay by Oliver Sacks, "The President's Speech," in which a group of patients with aphasia watch a Ronald Reagan speech and can't stop laughing, because even though they can't understand a word he's saying, his body language projects one lie after another.

It's A Big Scary Cosmos. Take A Friend With You.

Take fifteen minutes to watch this beautiful animation by Konstantin Bronzit, "We Can't Live Without Cosmos," an Oscar nominee for Best Animated Short for 2016. It's the wordless story of two cosmonauts training for a mission, lifelong friends joined by their shared dreams of space. It's just plain joyful, is what it is. The New Yorker's Jonathan Rothman emailed Bronzit to ask what the film is about:

“My film is not about the space program, and it is just partly about friendship,” he wrote. “It’s about loneliness. About the very close links between people. About our inability to live in human society without exiting, sometimes, to a different area, an open space where we can really breathe deeply and freely.” The idea for the film, he continued, had come to him in a dream, in the form of an image. That image “exists in my film almost in the very middle exactly, as it was in my dream.” He wouldn’t say which image it was.

We have a couple guesses. We bet you will too. Enjoy:

Watch this on The Scene.

Will You Help Get This Nigerian Astronaut Out Of Orbit?

I've got a bad feeling about this...

You think Major Tom had it bad? Check out this emailed tale of Nigerian astronaut Abacha Tunde, whose cousin would like you to help him return from space, where Tunde's been marooned since 1990:

I am Dr. Bakare Tunde, the cousin of Nigerian Astronaut, Air Force Major Abacha Tunde. He was the first African in space when he made a secret flight to the Salyut 6 space station in 1979. He was on a later Soviet spaceflight, Soyuz T-16Z to the secret Soviet military space station Salyut 8T in 1989. He was stranded there in 1990 when the Soviet Union was dissolved. His other Soviet crew members returned to earth on the Soyuz T-16Z, but his place was taken up by return cargo. There have been occasional Progrez supply flights to keep him going since that time. He is in good humor, but wants to come home.

In the 14-years since he has been on the station, he has accumulated flight pay and interest amounting to almost $ 15,000,000 American Dollars. This is held in a trust at the Lagos National Savings and Trust Association. If we can obtain access to this money, we can place a down payment with the Russian Space Authorities for a Soyuz return flight to bring him back to Earth. I am told this will cost $ 3,000,000 American Dollars. In order to access the his trust fund we need your assistance.

Consequently, my colleagues and I are willing to transfer the total amount to your account or subsequent disbursement, since we as civil servants are prohibited by the Code of Conduct Bureau (Civil Service Laws) from opening and/ or operating foreign accounts in our names.

Needless to say, the trust reposed on you at this juncture is enormous. In return, we have agreed to offer you 20 percent of the transferred sum, while 10 percent shall be set aside for incidental expenses (internal and external) between the parties in the course of the transaction. You will be mandated to remit the balance 70 percent to other accounts in due course.

Kindly expedite action as we are behind schedule to enable us include downpayment in this financial quarter.

Or instead, you could donate to the Wonkette Kickstarter for our awesome political card game, which is real, not a scam, and needs your help to launch. We're a bit over halfway there in terms of money, but with only 11 days to go, we may need to start selling off bloggers' organs to reach the goal. You want all of us to keep our kidneys, don't you?