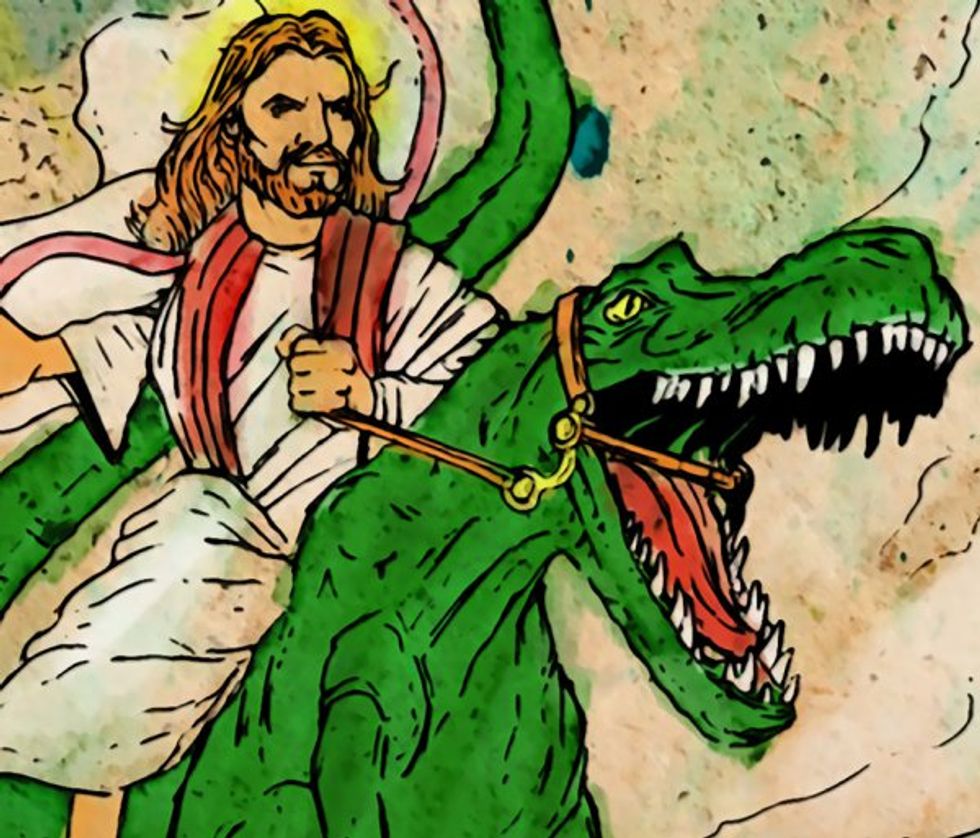 Question: Can states exclude churches from receiving aid for secular stuff like playgrounds, or does that violate the Free Exercise and Equal Protection Clauses?

Answer: Oh, shit. The Religious Right is about to start using tax money to teach kids about Jesus riding a dinosaur.

Facts of the Case

Missouri's Scrap Tire Grant Program recycles tires and subsidizes non-profits to upgrade their playgrounds with recycled rubber surfacing. Under the previous Democratic governor, religious institutions were barred from the program. This meant that Trinity Lutheran Church's preschool could not receive a grant, but a Montessori school would be eligible.

Are you starting to feel like they're baiting us liberals? You guys like recycling, you snowflakes want a nanny state where kids fall off the swings onto soft rubber instead of concrete to toughen 'em... That's no accident.

Trinity Lutheran argues that jungle gyms aren't religious, and that excluding parochial schools from public funding illegally penalizes them for their religion. Their Christian kids are just as entitled to protection from skinned knees as your heathen brats, right?

Opponents argue that States have always had the right to exclude religious institutions from public funding, and 39 states expressly outlaw it in their Constitutions. For instance, Missouri's Constitution says:

Neither the general assembly, nor any county, city, town, township, school district or other municipal corporation, shall ever make an appropriation or pay from any public fund whatever, anything in aid of any religious creed, church or sectarian purpose, or to help to support or sustain any private or public school, academy, seminary, college, university, or other institution of learning controlled by any religious creed, church or sectarian denomination whatever; (Art. IX, § 8)

There is also a PLOT TWIST. The former Democratic governor of Missouri Jay Nixon was replaced by Republican Eric Greitens, who is happy to disburse state funds to religious institutions like it says in the Bible. Under normal circumstances, that would mean that the case was moot -- Trinity would get its rubber playground, and the case would disappear. But the Republican Attorney General has hired outside counsel to defend the old law, on the theory that maybe one day a future Democratic governor could reenact it. And if you think this reeks to high heaven, YOU ARE RIGHT. Missouri has propped up a fake opponent so that Trinity Lutheran and its adorable, skinned-knee toddlers can give us the magical gift of public funding for religious schools forever. Hosanna!

JUSTICE GINSBURG: Notorious RBG was not having it.

I guess rather long ago now in the Everson case back in 1947, this Court said in no uncertain terms what the Framers didn't want was tax money imposed to pay for building or maintaining churches or church property.

...[E]ssentially this is a program open to everyone. Happens to be a competitive program, but everyone is open to compete on various neutral terms, and you're depriving one set of actors from being able to compete in the same way everybody else can compete because of their religious identification.

JUSTICE SOTOMAYOR didn't buy the stich-up by Greitens and the Missouri attorney general at all: "If we have no adversity, hasn't this case become mooted?" Nor did she accept that the playground's purpose was entirely secular.

So how is the building separate from the religious exercise therein? I believe that this playground is part of the ministry of this church. And, in fact, I look at its bylaws, I look at its advertisements, and it includes play and conducted in a religiously valuable way. [...] How do you separate out its secular function from its religious function?

JUSTICE ALITO wondered if the Constitutional separation of church and state was really an "admirable tradition." This guy...!

JUSTICE BREYER seemed to be on the fence. He asked why the case wasn't moot, but also suggested that funding a playground was similar to secular government services like police and fire, which no one would ever withhold from a religious school.

CHIEF JUSTICE ROBERTS opined that parochial schools should be able to use their publicly funded playgrounds to pray, because public schools sometimes host non-educational events on campus. Which makes no sense at all, but...

JUSTICE GORSUCH sees no reason to withhold money from any religious organization ever. Which is why Republicans were rushing to get him on the bench in time to hear this very case.

How is it that discrimination on the basis of religious exercise is better in selective government programs than general programs, first?

JUSTICE KENNEDY, a Californian, is very concerned that churches have access to public funding to make them earthquake-proof. Justice Kennedy is A OLD.

JUSTICE THOMAS: Last February, Justice Thomas asked his one and only question ever from the bench. But he's almost as nutty as Alito about getting the government back in the God business.

So, What Happens Now?

Dollars to doughnuts, the Court holds that states can no longer "discriminate" against religious organizations when distributing funds for "secular" purposes. Get psyched to fund cool stuff like:

All for organizations which are already tax exempt. Praise the lord!

Please give us moneez so we can buy a gun for to fight off the bears!