Prepare To Be Amused! It's Your White House Correspondents' Dinner Open Thread! 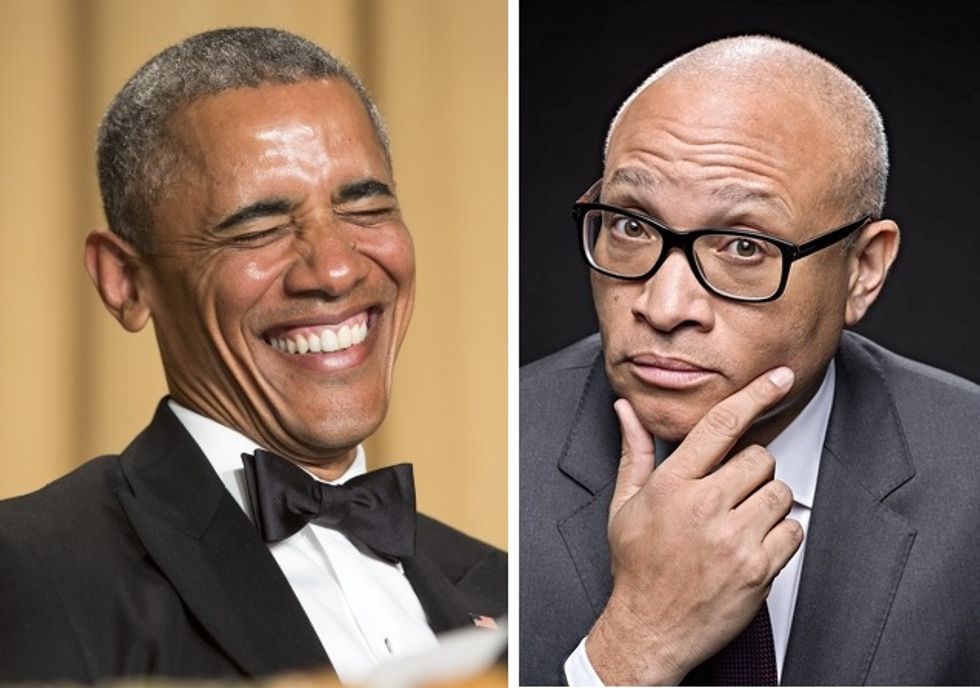 It's time for that annual ritual where Official Washington attempts to be funny (and sometimes they make it work!), the White House Correspondents' Dinner, AKA the Nerd Prom, AKA "Comedy Hit Or Miss Night." You might remember that one time when George W. Bush sparked outrage when he pretended to be looking for Iraqi WMDs in his office, and if you do, you remembered it wrong: You can peevishly correct your friends by informing them that actually happened at the 2004 Radio and Television Correspondents Association dinner, which is a completely different thing. Enjoy your smugness; you've earned it! And of course there was the best comedy routine, ever, Stephen Colbert's 2006 skewering of Mr. Bush, which was all the better for dropping his original plan to use a real skewer. Or last year's dinner, where Barry Bamz shared his Fuck-It list:

The greatest Bamz Correspondents' Dinner speech of all, was in 2011, when he Birthered all over Donald Trump, because he could:

In comedic terms, Barry really "killed" that night, as you may recall.

Mr. Trump will not be at the Washington Hilton tonight, but we have a feeling that will probably not keep anyone from razzing him. The featured comic tonight will be the esteemed Larry Wilmore, host of Comedy Central's "The Nightly Show," and we are reasonably certain he will mention Trump. Possibly more than once. Bernie Sanders is the only presidential candidate actually in attendance, or it might just turn out to be Larry David. We'll go way out on a limb and bet that Barry Bamz will find a way to mention Ted Cruz's amusing glitch in calling a basketball hoop a "basketball ring."

Now, the important Q & A parts!

Where can I watch this extravaganza?

You can watch it RIGHT NOW at CSPAN, although they're all just chowing down right now. CNN began airing it at 8:00 Eastern, and MSNBC began coverage at 9:00 EDT. It's also on Fox News, where the anchors will simply scowl the whole time. According to the Washington Post,

The schedule says President Obama and Wilmore will start their speeches at 9:45 p.m… however, for the last two years, they haven’t taken the stage until closer to 10:15 p.m. Expect everything to wrap up at approximately 11 p.m.

Welp, there's CSPAN'S website, which is streaming the loud crowd drinking and talking right now, and also reading tweets. It is also being streamed on the Washington Post and MSNBC websites

I missed the start! What can I do?!

CSPAN and CNN will rerun the festivities from the beginning all over again as soon as it's over. WaPo promises video and transcripts online sometime after both the POTUS and Wilmore have spoken.

I would like to laugh a little more at Donald Trump's 2011 humiliation, please

You might want to read this piece by Wait Wait Don't Tell Me's Roxanne Roberts, who also works at the Washington Post, we hear.

Trump was so humiliated by the experience, they say, that it triggered some deep, previously hidden yearning for revenge. “That evening of public abasement, rather than sending Mr. Trump away, accelerated his ferocious efforts to gain stature in the political world,” wrote the New York Times last month.

Aside from the questionable premise that the Republican front-runner has ever had an unexpressed thought, there’s the problem of speculation based on nothing but YouTube clips of the night. The only person who knows definitively when or why he decided to run is Trump.

“It’s such a false narrative,” Trump told me this week. “I had a phenomenal time. I had a great evening.”

We're perfectly willing to believe the 2011 dinner had nothing to do with Trump's decision to run. But no way was he enjoying a bit of that.

Pfft. We will be drinking and prepping Sunday's Dear ShitFerBrains, which is how we roll on a Saturday night. That, and using decades-old slang, which is totally tubular. But Yr Dok Zoom will join you in the comments, as he is wont to do. "Peace Out."