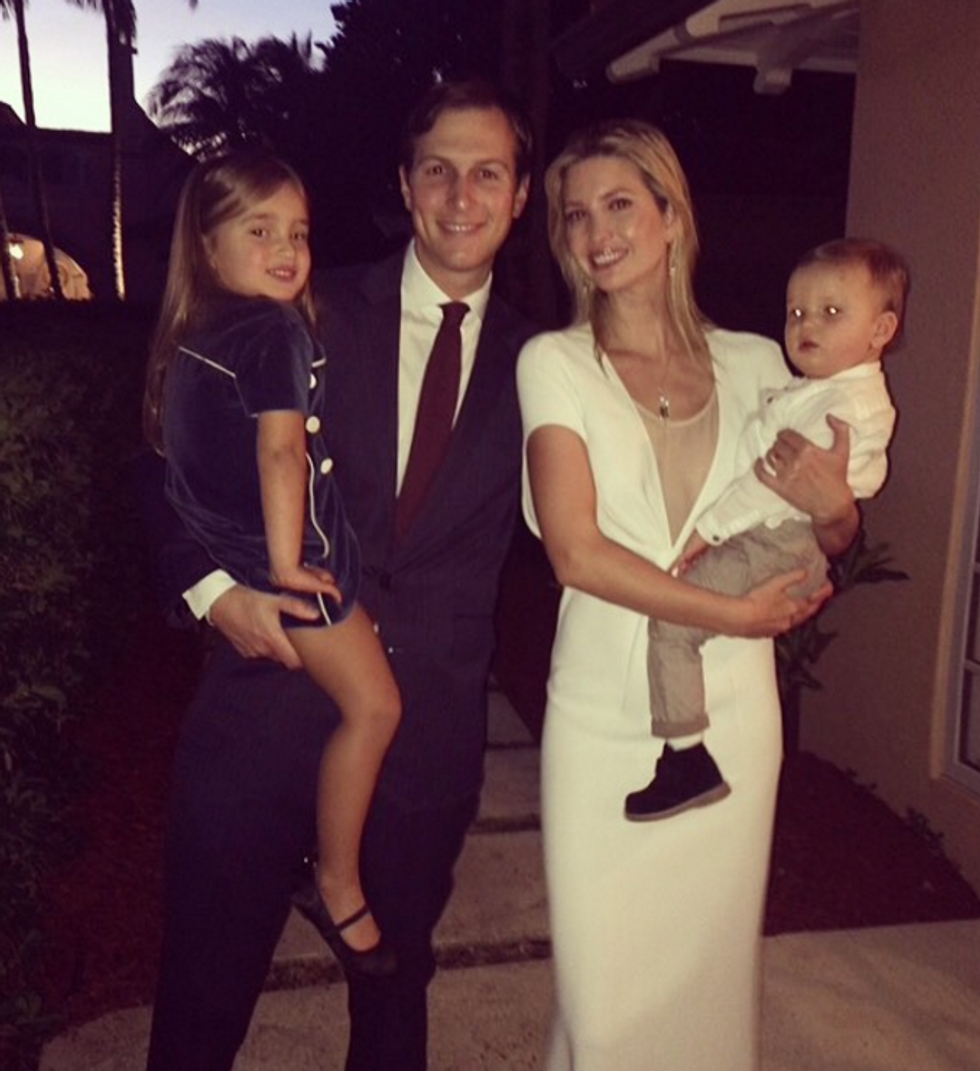 WE PROPHESIED THIS STORY IN OUR BRAIN LAST NIGHT! You see, we were watching the episode of "The West Wing" in the first season called "Take This Sabbath Day," where everybody is about to get a dang weekend for once, but then PLOT TWIST! the Supreme Court refuses to stay an execution, so Sam Seaborn (hot Rob Lowe) literally calls Toby Ziegler's rabbi and says, "You should please do a sermon on capital punishment so Toby can hear it when he comes to shul." So the rabbi does, and Sam calls Toby DURING THE SERVICE, and yadda yadda, the Sabbath has been broken and they are all back at work doing White House things.

And then we remembered how Ivanka Trump and Jared Kushner are extremely observant Orthodox Jews, who literally go off the grid from sundown Friday to sundown Saturday. They are even inviting cabinet members and nominees over for shabbat dinners! Then it dawned on us that, holy shit, some of the craziest things to happen so far in the Trump regime have happened during or near those Shabbat hours. Were we crazy to think that maybe when it gets close to sundown on Friday, President Steve Bannon sticks his furry pockmarked front hoof up his puppet Donald Trump's ass, because he knows Trump's son-in-law Jared Kushner, the hot, evil "snaky little motherfucker" who still comes off as the sanest one in the bunch, won't be around to stop him?

And then we saw this in Vanity Fair about this past Friday, the day Trump issued his awful executive order banning Muslims:

As the work week came to a close, Trump quietly announced from a wooden desk what would surely be the most controversial measure of them all: a ban on refugees from around the globe. Trump would temporarily halt migration, in particular, from seven predominantly Muslim countries, such as Libya, Iran, Iraq, Syria, and Sudan. [...] He signed the order, with a gold-tipped pen, at 4:42 p.m., 16 minutes before sundown.

OH FUCK OH FUCK OH FUCK. When Ivanka and Jared go off to be Jewish together, Trump REALLY gets to misbehaving. As VF notes, Trump's temper tantrum about how many tens of people showed up to his inauguration, Trump's rude and poorly received speech at the C.I.A., Sean Spicer's batshit yelly statement that same afternoon, thousands of people protesting over Trump's illegal executive order that led to Muslims being detained at airports all over the country, all these things happened while Ivanka and Jared were off the grid.

In fact, VF reports that the whole kerfuffle over Ivanka pictured in that silver Carolina Herrera gown on Instagram sort of happened because she and Jared didn't really know just how pissed the entire world was about Steve Bannon and Daddy's executive order, because it was Shabbat. (Ivanka reportedly feels really bad about that post, for what that's worth. It is zero worth.)

And according to whatever leaky source has been talking to Vanity Fair, Jared is pissssssssed at what he sees as his waning influence inside the White House. (Yes, already! After he's been the one who's theoretically really in charge this whole time!) He used to be known as the "secure line" into the Trump world, able to keep Steve Bannon and the others from driving Trump off a cliff, but these days, it's not like that:

Last week, Kushner spent 24 hours trying to broker a meeting between Trump and Mexican President Enrique Peña Nieto. [...] Ultimately, Peña Nieto agreed—a feat Kushner presented to his father-in-law on Wednesday night. It was his first real victory in the West Wing in his role as senior adviser, and it would be a major step toward turning one of Trump’s main campaign promises into a reality.

Less than 12 hours later, though, it all fell apart. After Peña Nieto reiterated that Mexico does not plan to pay for Trump’s proposed wall, Trump tweeted that if Mexico is “unwilling to pay for the badly needed wall, then it would be better to cancel the upcoming meeting.” Just like that, the meeting was canceled. “Kushner was fucking furious,” the source told me. “I’d never once heard him say he was angry throughout the entire campaign. But he was furious.”

OMG it must be so hurtful when your father-in-law breaks up with you for an oozing gargoyle like Steve Bannon. Like ugh, what does Poppy even see in him, right, Jared?

VF's source notes that He Went To Jared's "demeanor toward Trump [has] changed," and also that the poor boy has lost seven whole pounds in the past week and a half, which is a lot of pounds when your man body looks like this:

Come on Jay-Jay, how's Wonkette going to write articles about how you're hot (and evil) if you waste away like that?

The over-arching idea of this latest leaky report seems to be that both Jared and Ivanka's futures are uncertain right now, what with how Trump's presidency is likely to destroy Ivanka's brand and Jared can't seem to charm the pants off the old man the way Steve Bannon can. (No, the article doesn't say that explicitly, but good god, who else do we actually think Jared's competing with here? The lusty wiles of Mike Pence? The bleeding nailbeds of Kellyanne Conway? The shouty prolapsed anus named Sean Spicer? No, this is a struggle with President Bannon, and you all know it.)

Oh well. The point of this article is that we called it on Trump being up to no good while Ivanka and Jared are Doing Jewishes, and they better get Dear Popsy under control ASAP.