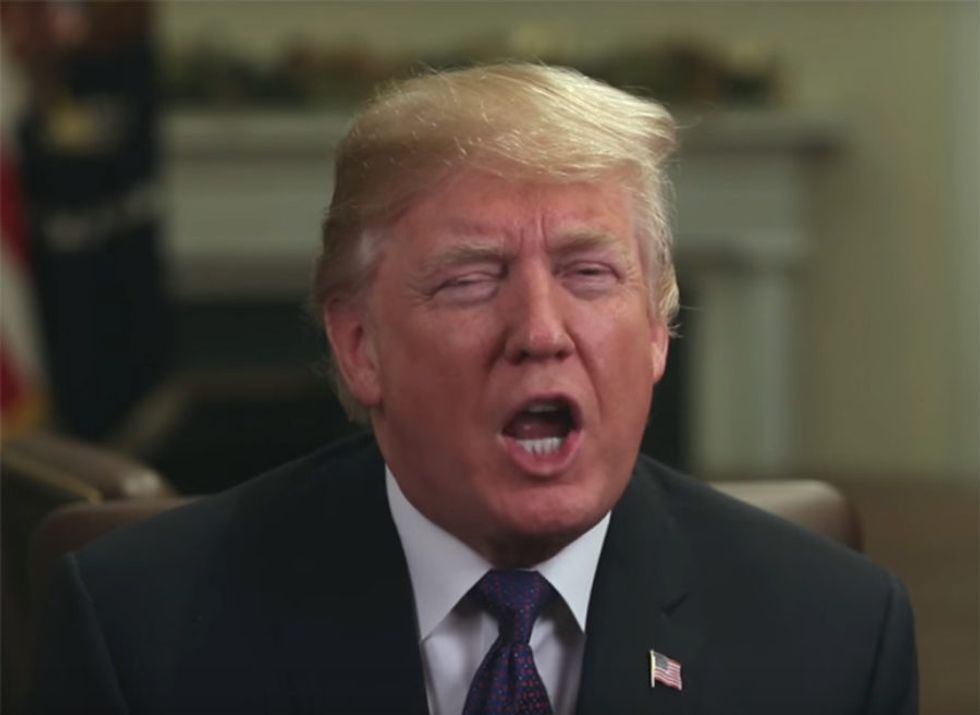 Morning, y'all, Donald Trump did that thing again! The thing that makes his lawyers call their local alcohol delivery service and say, "Bring us a ten gallon bucket of Jägermeister and some straws, we are getting fuuuuuucked up tonight!" That's right, he emerged from John Kelly's office Wednesday afternoon out of nowhere and decided to talk to reporters without adult supervision.

WaPo doesn't identify her in the transcript, but Haberman is the one who asked the question, then got berated by Trump:

REPORTER: Would you do it under oath, Mr. President?

TRUMP: You mean like Hillary did it under — who said that?

REPORTER: I said that.

REPORTER: Would you do it under oath?

TRUMP: Oh you said it. You did say it. You say a lot. Did Hillary do it under oath?

REPORTER: I have no idea, but I'm not asking about —

REPORTER: Mr. President, you are going to do it under oath?

REPORTER: To reach a higher standard, you would do it under oath?

TRUMP: Oh, I would do it under oath.

The president is actually correct, that Hillary Clinton did not talk to the FBI under oath. A couple quick l'il problems, though. First, lying to the FBI is STILL A CRIME, regardless of whether or not one is under oath. (See: Flynn, Michael and Papadopoulos, George.) Also too, you go under oath IN FRONT OF A GRAND JURY. So basically Trump was saying he is so excited to lie to a grand jury.

Trump idiot lawyer Ty Cobb rushed to make excuses for this latest Trump mouth diarrhea, saying Trump was speaking "hurriedly," and that no, Trump does not want to go in front of a grand jury, please do not make him fall into that perjury trap, Robert Mueller!

(Of course, this is a good time to point out that Trump wouldn't be at risk of falling into Mueller's perjury traps if he wasn't a LIARFUCKINGLIAR.)

We must note that, at the beginning of the scrum, Trump said something he's never repeated over and over again like his very good brain has been trapped in a loop for months:

TRUMP: There's been no collusion whatsoever. There’s no obstruction whatsoever. And I'm looking forward to it. I do worry when I look at all of the things that you people don't report about, with what's happening. If you take a look at, you know, the five months' worth of missing texts — that's a lot of missing texts. And as I said yesterday, that's prime time.

So you do sort of look at that and say, "What's going on?" You do look at certain texts where they talk about insurance policies or insurance where they say the kinds of things they’re saying, you gotta be concerned. But I would love to do that, and I'd like to do it as soon as possible.

We have this hilarious feeling in our stomach that Trump thinks he's going to get to clap back at Mueller and ask him about the missing FBI sexts. He can't possibly think that, can he? Like, Trump has been deposed a gazillion times, surely he knows better. On the other hand, he's never been deposed when THE DEEP STATE WAS TRYING TO MURDER HIM WITH SEXTS. So we'll see.

Please note that this time Trump added "no obstruction" to his usual "no collusion" mantra. He revisited that later:

LOLOL well! Um! Mr. President! We are Not A Lawyer, and we know you found your lawyers in the Yellow Pages, but ... Um! Actually?

Trump also addressed the subject of FBI Deputy Director Andrew McCabe (you know, the guy who is #corrupt because his wife is a #Democrat), saying he doesn't rememberasking McCabe who he voted for, but it would be OK if he did, how would that be a problem? Christ, what A Idiot.

This, by the way, is almost identical to Trump's line about how he didn't order Michael Flynn to sweet talk Russians about getting the sanctions lifted, but if Flynn hadn't been doing that, Trump would have ordered him to do it, because conspiring with Russians was just his job, right?

Finally, Trump told reporters he "couldn't have cared less about Russians having to do with [his] campaign," so interpret that as you will.