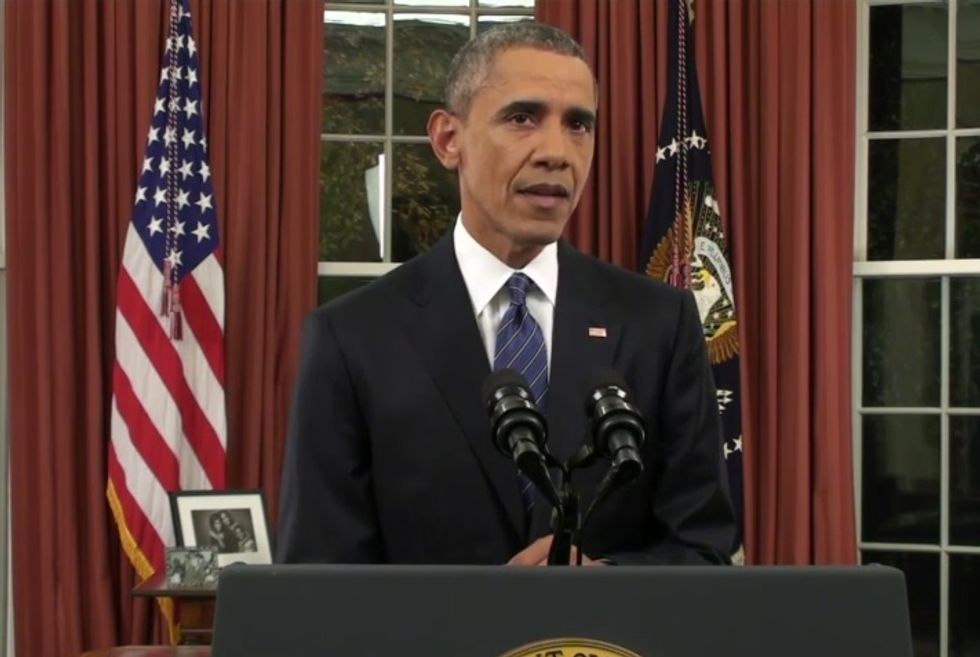 President Obama will address the San Bernardino shootings and his administration's plans for fighting terrorism Sunday night at 8 p.m., in what everyone keeps reminding us is a "rare" address from the Oval Office. Now that the FBI has confirmed it's investigating the shootings as terrorism, and people's Fox-watching elderly mothers are freaked out at the prospect of family members even driving on the I-5 through California, Barry will go before the nation and explain to us that while ISIS is a real threat, we also don't need to panic, even though panic might get better TV ratings. A White House statement said the president will:

discuss the broader threat of terrorism -- including the nature of the threat, how it has evolved, and how we will defeat it.

He will reiterate his firm conviction that ISIL will be destroyed and that the United States must draw upon our values -- our unwavering commitment to justice, equality, and freedom -- to prevail over terrorist groups that use violence to advance a destructive ideology.

Based on that preview, which doesn't call Islam the root of all evil and murder in the world, we're betting that maybe Wingnut America isn't going to be especially satisfied by the speech because Obama will almost certainly fail once again to say the magic words "Radical Islamic Terrorism," the only utterance which can possibly freeze ISIS and al Qaeda in their tracks and make them melt like the Wicked Witch of the Middle East.

[contextly_sidebar id="pHNGNAgzfFzcxDwscv3zRW6TOzVQvvIQ"]Considering that the entire Republican party thought 24 was a documentary on how to torture our way to victory, that doesn't surprise us a heck of a lot. Let's see if Barry has any ideas that match the sheer brilliance of killing terrorists' families, waiting until they're not looking then stealing their oil, or sending more Americans to die in the Middle East so no Americans will ever die anymore in America. Instead, he'll probably explain that it's a complex problem that requires a combination of military action, intelligence, diplomacy, and, for folks in The Homeland, a dedicated effort to hold our fudge, if that's not too much trouble.

Update 8:18 Obama didn't say the magic words, but did say that the San Bernardino shootings were an "act of terrorism" and that the killers had "gone down the dark path of radicalization, embracing a perverted version of Islam that calls for war against America and the West." That won't be good enough for the carnival barkers, obviously.

Update 8:24 Obama noted that as we've gotten better at breaking up complex terror plots like 9/11, "terrorists turned to less complicated acts of violence like the mass shootings that are all too common in our society," citing the Ft. Hood attack, the Chattanooga shootings, and San Bernardino. Now we simply need to wait for Wayne LaPierre to be named an unindicted co-conspirator.

The threat from terrorism is real, but we will overcome it. We will destroy ISIL and any other organization that tries to harm us. Our success won't depend on tough talk, or abandoning our values, or giving in to fear. That's what groups like ISIL are hoping for. Instead, we will prevail by being strong and smart.

Update 8:35 Obama gets to the policy wonkery, with easily-numbered steps you can follow at home. 1) Military will bomb ISIL and other bad guys wherever. So many bombs. 2) Train and equip Iraqi and Syrian fighters, and hope they won't drop their weapons this time since U.S. Special Forces will be watching them and yelling at them if they do. 3) Ramping up intelligence with other nations, disrupting terrorist financing and trying to counter propaganda. 4) International negotiations to end Syrian civil war, which should be easy enough, once we can persuade Russia and Syria to get reasonable. Also, going to get tougher on visa applications.

Update 8:44 Your Slow Transcriptionist gets to what we should not do: Let's not get into another damned ground war in Asia, and let's not turn against each other, since "that too is what ISIL wants." By insisting that we're not at war with all of Islam, and that American Muslims are not the enemy, Obama isn't saying anything different from what George W. Bush did -- but he'll get called soft on terror for it.

Update 8:50 Obama calls on the Muslim community to confront and reject extremists:

It's a real problem that Muslims must confront without excuse.

Muslim leaders here and around the globe have to continue working with us to decisively and unequivocally reject the hateful ideology that groups like ISIL and Al Qaeda promote, to speak out against not just acts of violence, but also those interpretations of Islam that are incompatible with the values of religious tolerance, mutual respect, and human dignity.

Not nearly as emotionally satisfying as promising to bomb the hell out of everyone, but maybe he'll get some credit for at least acknowledging that there's a problem? Haha, we are joking -- he was supposed to say that all Muslims are dangerous!

Update 8:55 And now, a word for the Republican presidential candidates:

Talk about your wild-eyed radicalism! That's the kind of political correctness that makes America weak, isn't it?

And then Barry closed by playing "One Tin Soldier" and said good night and may God Bless America, The End.