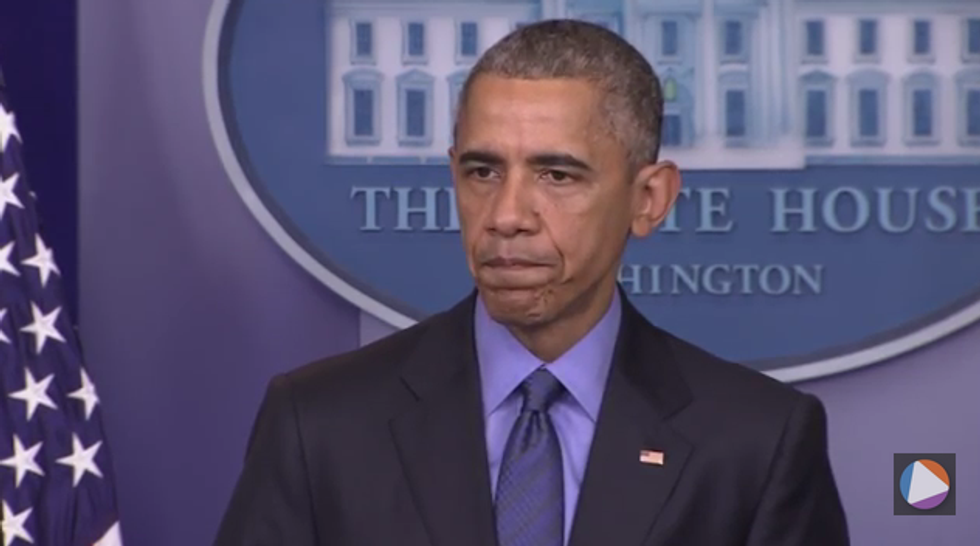 President Obama spoke briefly about the church shooting in Charleston that left nine dead, in what the Department of Justice and other authorities are investigating as a hate crime. There's no official word from the feds on what kind of hate crime, so per Fox News and other rightwing "news" outlets, it's likely the alleged shooter spewed racist epithets and wanted to take his country back from the black congregation because he was primarily motivated by his hatred of Christians, of all races.

The president offered his thoughts and prayers to the community of the Emanuel African Methodist Episcopal Church, and then injected race into it by reciting the church's history:

Mother Emanuel is in fact more than a church. This is a place of worship that was founded by African Americans seeking liberty. This is a church that was burned to the ground because its worshippers worked to end slavery. When there were laws banning all black church gatherings, they conducted services in secret. When there was a non-violent movement to bring our country closer in line with our highest ideals, some of our brightest leaders spoke and led marches from this church's steps. This is a sacred place. This is a sacred place in the history of Charleston, and in the history of America.

While he is not able to discuss details of the ongoing investigation into Dylann Storm Roof, the 21-year-old suspect now in police custody, the president did have some thoughts to share generally -- the kind of thoughts that will no doubt be dismissed as unnecessarily politicizing a tragedy to push his liberal agenda of not wanting people to get killed all the damn time:

Now is the time for mourning and for healing. But let's be clear: at some point we as a country will have to reckon with the fact that this type of mass violence does not happen in other advanced countries. It doesn't happen in other places with this kind of frequency. And it is in our power to do something about it. I say that recognizing the politics in this town foreclose a lot of those avenues right now. But it would be wrong for us not to acknowledge it. And at some point its going to be important for the American people to come to grips with it, and for us to be able to shift how we think about the issue of gun violence collectively.

The president did not add, "Still your move, Congress!" The president then co-opted Dr. Martin Luther King, who'd be a Republican today, by quoting his words in 1963, following the bombing of a coincidentally black church that killed four little girls who happened to be black. Typical Obama. The president did not talk about black-on-black crime, or the lack of fathers in the white community, or even how radical Islamic terrorism is probably at the root of this somehow, so we're fairly certain the wingnuts will find plenty of reasons to be OUTRAGED! at the president's refusal to recognize this tragedy for what it is: an isolated incident that has nothing at all to do with race. Or guns.