President Obama Opens Smithsonian's Museum Of African-American History. You *Have* To Watch This. 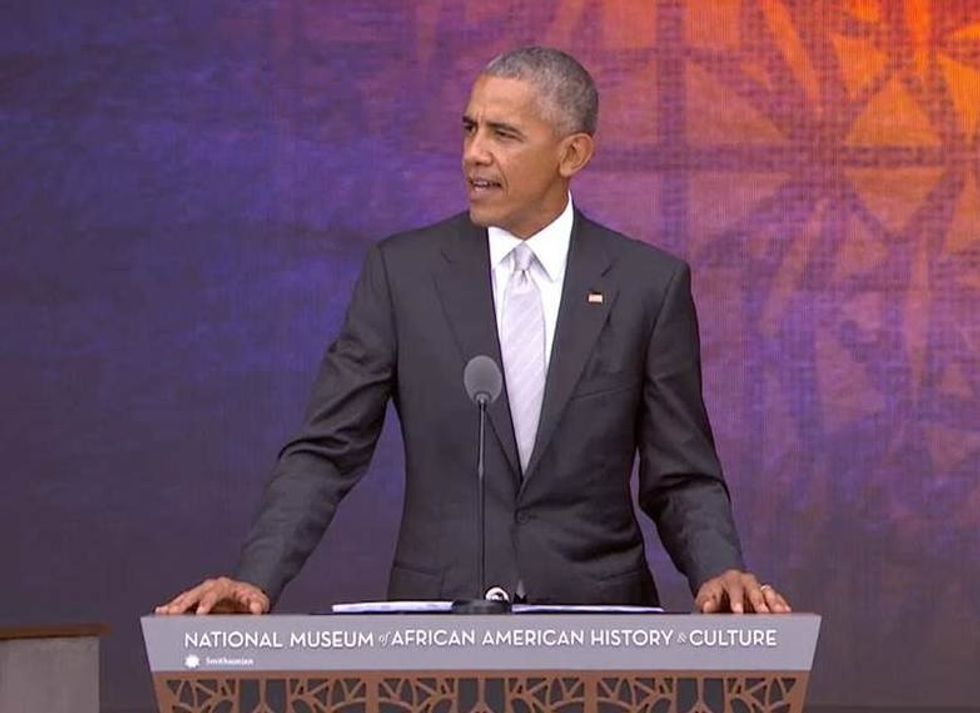 In his speech at the grand opening of the National Museum of African American History and Culture, President Barack Obama reminded us again just how much we're going to miss him.

A couple of highlights -- keeping in mind the entire speech is a 35-minute highlight:

Obama described a block of stone -- on display in the museum's lowest basement level, dedicated to artifacts of slavery -- with a worn historical marker reading "General Andrew Jackson and Henry Clay spoke from this slave block during the year 1830":

Image from New York Times story on the museum

Consider what this artifact tells us. On a stone where, day after day, for years, men and women were torn from their spouse, or their child, shackled and bound, and bought and sold and bid like cattle; on a stone worn down by the tragedy of over a thousand bare feet, the only thing we considered important, the singular thing we once chose to commemorate as history, with a plaque, were the unmemorable speeches of two powerful men.

That block I think explains why this museum is so necessary. Because that same object reframed, put in context, tells us so much more.

At the risk of going all partisan here: We're fairly certain Dinesh D'Souza will eventually get around to tweeting, smugly, that Jackson and Clay were both powerful men in the Democratic party, which is why you should see his dumb movie about why Democrats are the party of slavery and Jim Crow. Obviously the real lesson here is that Obama covered up how Democrats are so very corrupt, profaning this stone where thousands suffered with a plaque commemorating Democratic slaveholders.

Happily, Mr Obama has already given us the reasonable response to such twaddle: The block of stone tells us "about history, about how it's told, and about what can be cast aside." Americans have -- with the exception of some neo-Confederate idiots -- chosen to cast aside the hate of Jackson and Clay, and what is valued, what is memorialized in this museum, is the slave block -- and the plaque remains there to remind us that when looking at history, we don't always get it right; we honor the wrong things. That stone is the perfect metaphor for how we should reply to D'Souza, too: We can acknowledge America's (and sure, our party's) historical sins and reject the values of those who perpetrated them, and make it clear that we stand today with those who fought slavery and oppression, regardless of the party label that followed their names.

This is the place to understand how protest and love of country don’t merely coexist but inform each other. How men can proudly win the gold for their country but still insist on raising a gloved fist. How you can wear an “I Can’t Breathe” T-shirt and still grieve for fallen police officers. Here’s the America where the razor-sharp uniform of the Chairman of the Joint Chiefs of Staff belongs alongside the cape of the Godfather of Soul.

And then there was this reminder of why a museum is a thing that helps us bring the past forward into today, why history is an ongoing process:

A museum alone will not alleviate poverty in every inner city or every rural hamlet. It won’t eliminate gun violence from all our neighborhoods, or immediately ensure that justice is always colorblind. It won’t wipe away every instance of discrimination in a job interview or a sentencing hearing or folks trying to rent an apartment. Those things are up to us, the decisions and choices we make. It requires speaking and organizing and voting, until our values are fully reflected in our laws and our policies and our communities. But what this museum does show us is that even in the face of oppression, even in the face of unimaginable difficulty, America has moved forward. So this museum provides context for the debates of our times. It illuminates them, and gives us some sense of how they evolved. And perhaps keeps them in proportion.

Make sure you watch to the end, when the president officially declares the museum open by joining four generations of the Bonner family, from 7-year-old Christine to 99-year old Ruth -- whose father, Elijah Odom, was born in slavery, escaped, and eventually became a physician -- in ringing the "Freedom Bell" from one of the the oldest African-American churches in the country, First Baptist Church in Williamsburg, Virginia.

We're crying, you're crying, everybody's crying. And feeling awfully grateful to have had eight years with this president.