President's Son-In-Law Gonna Do Business All Over America's Face! What Could Go Right? 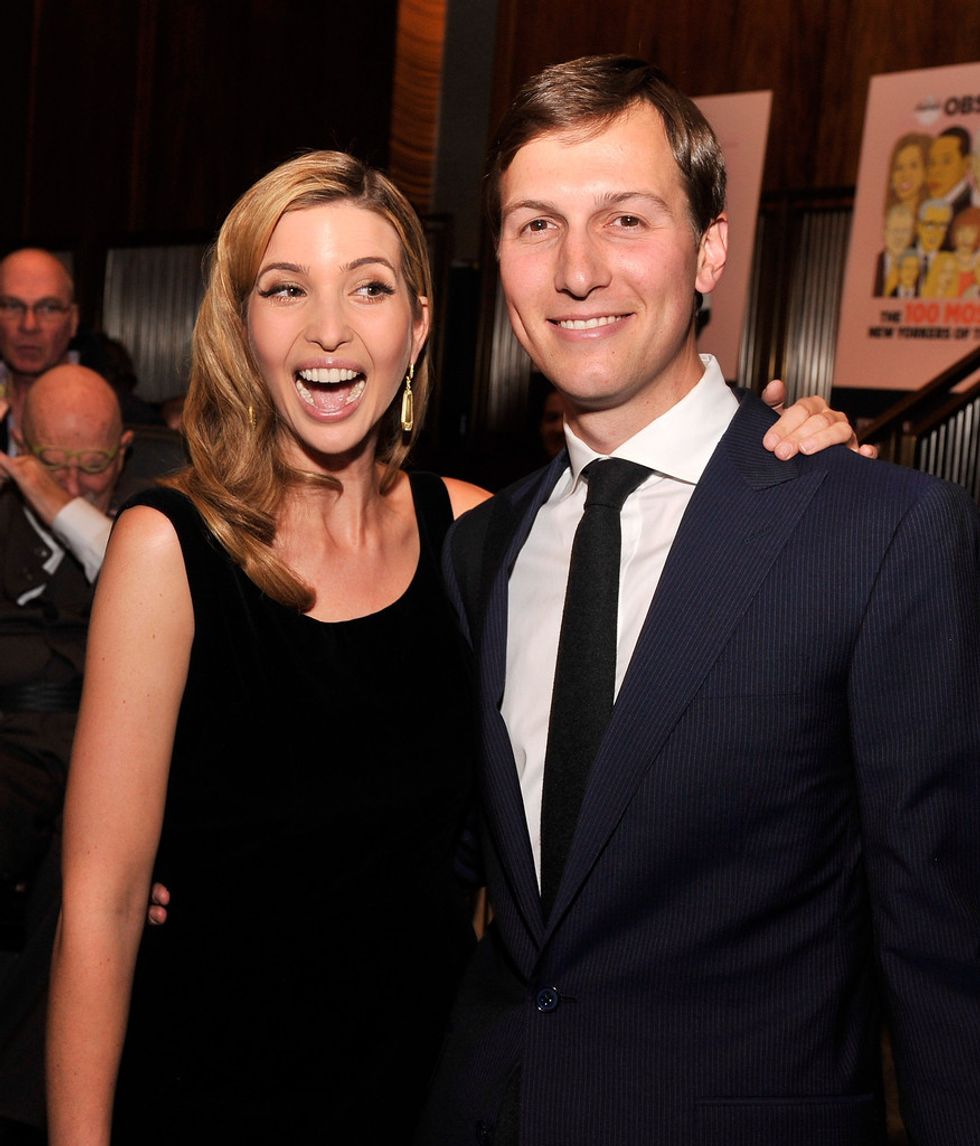 Not pictured: the Russian ambassador

Fresh off solving the Israeli-Palestinian conflict, Wunderkind Jared Kushner has a brand new gig fixing the federal bureaucracy. In his free time when he's not skiing or staring down China on trade, Jared will head up the Mansplainers Task Force. Hosanna, The Republic is saved!

The White House Office of American Innovation, to be led by Jared Kushner, the president’s son-in-law and senior adviser, will operate as its own nimble power center within the West Wing and will report directly to Trump. Viewed internally as a SWAT team of strategic consultants, the office will be staffed by former business executives and is designed to infuse fresh thinking into Washington, float above the daily political grind and create a lasting legacy for a president still searching for signature achievements.

While Kushner has no actual experience governing at either the state or federal level, HE HAS AN MBA! His father paid $2.5 million to get that Harvard admit, so it must be good!

As FoxNews viewers know well, the peasant serfs who have years of actual government service are lazy morons who never held a real job. But the Mansplainer Shock Troops will swoop in and slay all the waste, fraud and abuse.

“There is a need to figure out what policies are adding friction to the system without accompanying it with significant benefits,” said Stephen A. Schwarzman, chief executive of the investment firm Blackstone Group. “It’s easy for the private sector to at least see where the friction is, and to do that very quickly and succinctly.”

It's so easy when you're smarter than everyone else! What we need is to spin off the unprofitable parts of government into a separate company, pay out a massive dividend, and have the weaker company declare bankruptcy and stiff its creditors. Easy peasy, just like healthcare!

To be fair, this isn't Kushner's first experience as an emergency Mansplainer. At 25, he bought the New York Observer, a small but influential paper, and set about rebranding it as a tabloid to make it more profitable. Elizabeth Spiers was one of the many editors who cycled through under Kushner's tenure.

And i appreciate the value of "fresh eyes" but you generally don't assign a layman heart surgery bc you need a fresh perspective.

Seems like someone's hormones are making her a little hysterical this morning. Actually, inheriting a family fortune endows you with instincts that are much more valuable than on-the-job learning. How 'bout you grab us some coffees, Liz?

Kushner's "SWAT Team" has a diverse list of priorities.

At least to start, the team plans to focus its attention on reimagining Veterans Affairs; modernizing the technology and data infrastructure of every federal department and agency; remodeling workforce-training programs; and developing “transformative projects” under the banner of Trump’s $1 trillion infrastructure plan, such as providing broadband Internet service to every American.

In some cases, the office could direct that government functions be privatized, or that existing contracts be awarded to new bidders.

The office will also focus on combating opioid abuse, a regular emphasis for Trump on the campaign trail.

So...he's assembled a task force of corporate tycoons who will FRESH EYES all over the federal bureaucracy to see how we can make it better by privatizing it and giving all the contracts to "new bidders." Awesome! What could possibly go wrong here? Can't wait to see all those market solutions for the opioid crisis.

After he left a recent meeting of manufacturing chief executives with Trump, [Dow Chemical CEO Andrew] Liveris said, “Rather than entering a vacuum, I’m getting emails from the president’s team, if not every day, then every other day — ‘Here’s what we’re working on.’ ‘We need another meeting.’ ‘Can you get us more input on this?’ ”

Kushner proudly notes that most of the members of his team have little-to-no political experience, hailing instead from the world of business.

Meanwhile, the New York Times wonders if there might be something the slightest bit fishy about billionaire investor Carl Icahn advising Trump on changes to ethanol rules when, just coincidentally, his own company stands to profit bigly. So much swamp draining!

In Trumpland, government is just one big corporation, seeking to maximize output for its shareholders.

“We should have excellence in government,” Kushner said Sunday in an interview in his West Wing office. “The government should be run like a great American company. Our hope is that we can achieve successes and efficiencies for our customers, who are the citizens.”

There was no word on how he planned to run the Veterans Administration as a profitable business. Nor did Kushner's Merry Band of MBAs seem aware that USA Corp is on a collision course with its own Board of Directors in Congress.

There could be friction as the group interacts with myriad federal agencies, though the advisers said they did not see themselves as an imperious force dictating changes but rather as a “service organization” offering solutions.

Kushner’s team is being formalized just as the Trump administration is proposing sweeping budget cuts across many departments, and members said they would help find efficiencies.

Kushner was skiing in Aspen last week, so it's understandable that he hadn't caught up on the news when he sat down with the WaPo on Sunday. He probably missed that little thing on Healthcare where his own party couldn't vote to repeal Obamacare even though they'd been literally screaming about it for seven years. But please, tell us more about how you're going to get Congress to pass $1 trillion of infrastructure spending and cut the budgets of all the federal agencies. Politicians are always dying to give up power by shrinking the departments they administer.

Seems like Kushner's Goon Squad might be on a collision course with the buzzsaw of reality in DC. But maybe he'll be too busy MBAsplaining to the Senate about his conversations with the Russians to even care. Sad!