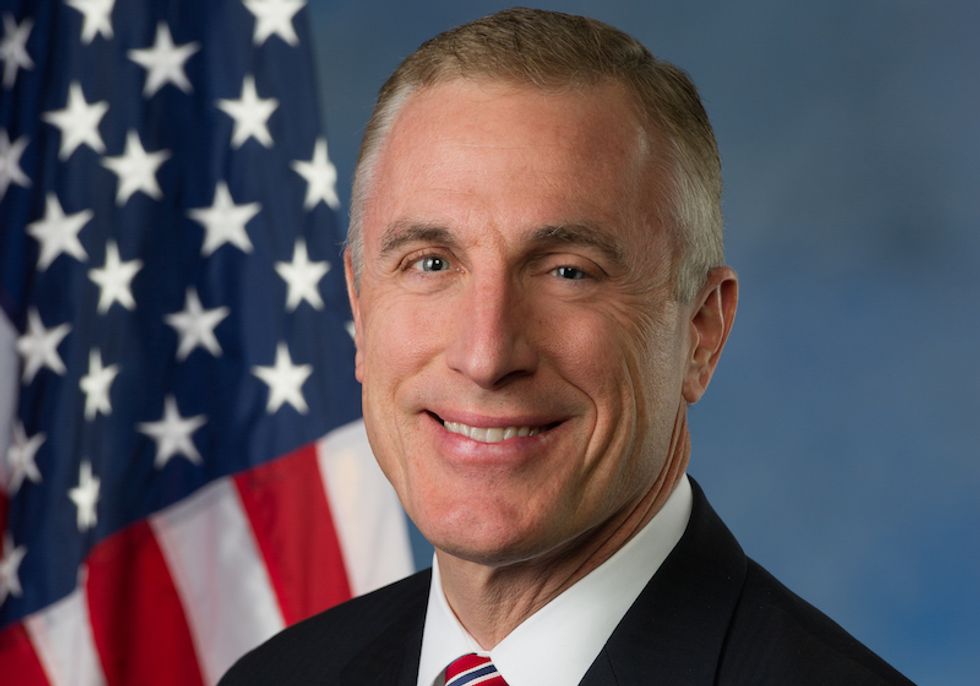 WELL THAT WAS FAST:

Rep. Tim Murphy (R-Pa.), the embattled anti-abortion lawmaker who allegedly encouraged his lover to terminate a pregnancy, resigned from office Thursday — just 24 hours after announcing his plan to retire after 2018.

“This afternoon I received a letter of resignation from Congressman Tim Murphy, effective October 21," Speaker Paul Ryan said in a statement. "It was Dr. Murphy's decision to move on to the next chapter of his life, and I support it."

That's right, YOU FUCK OFF. (If you have not yet learned of the saga of Tim Murphy, pro-life saint, who asked a lady what was not his wife to abort his unborned baby, click here! He's quite a charmer.)

Let's go ahead and start pissing on the end of Murphy's career, by talking about what will happen to his Congressional seat. As far as chances for an easy Democratic pick-up go, Politico has some cold water to throw on your face:

Murphy’s district leans heavily Republican, backing Donald Trump by almost 20 points in 2016 and Mitt Romney by nearly 17 points in 2012. It is likely to remain in Republican hands.

Indeed, national Democrats scoffed at the idea that Democrats might be able to retake the seat — even if Murphy, crippled from scandal, were to run again. One Democratic consultant called it “completely unwinnable” as an open seat.

"[Murphy] is certainly weaker today than he was yesterday, but it'd be a stretch to say this is a Democratic pickup opportunity," another national Democratic strategist said.

OK yeah, sure, fine. Murphy's district, PA-18, is in western Pennsylvania, is white as fuck, and includes a bunch of Pittsburgh suburbs. BUT SHOULD WE NOT TRY? In the 2016 election, the Democrats didn't even run anybody, so we feel like in an open field, if the Dems got a fire under their asses and hit the ground running, we could have a surprise upset. America haaaaaaates Donald Trump, and America haaaaaates the do-nothing GOP Congress.

And yes, we had a few disappointments earlier this year in special Congressional elections in heavily Republican districts, but in every single one, Democrats came within spitting distance in races they historically would have lost by one million points. And at that point, Trump hadn't been president for eight months!

Is there any reason in the whole wide world not to go for broke and fight for any and every seat in the United States Congress? (AHEM, NATIONAL DEMOCRATS, ALABAMA SENATE COUGH COUGH.) The mid-terms are in sight! Let's rile 'em up and get 'em to the polls! SI SE PUEDE!

OK anyway, point is, this is your open thread, so let's award a bag of dicks and one "Sayonara, motherfucker!" to Tim Murphy, and then talk about how we're going to convince the national Dems to play hard in all these races. It's too fucking important not to.

Wonkette salaries, servers, and all of the things are fully funded by readers like you! Click here to keep us ad-free!