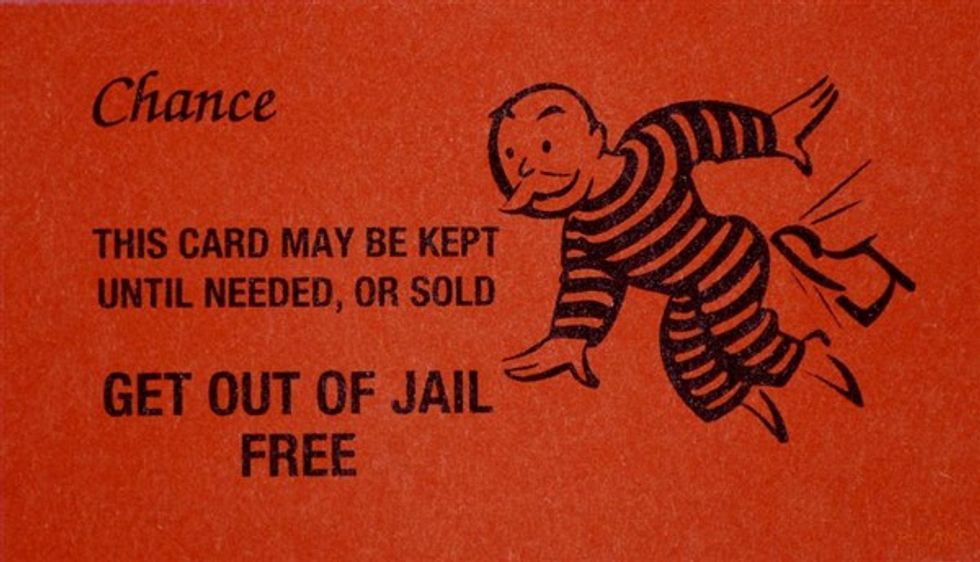 Despite the widespread lender fraud endemic to the foreclosure crisis, nary a Wall Street Big Wig felt the wrath of the criminal justice system. But just in time for Obama's Third Term, the Feds are giving financiers the business.

The NYT credits the hiring of Deputy Attorney General Sally Yates, who "created new guidelines for prosecuting corporate employees," and Leslie Caldwell, who took over the Justice Department’s criminal division. While New York U.S. Attorney Preet Bharra gets all the headlines and cash settlements, these two ladies are trying to show that at least a sliver of the criminal code applies to thieves with summer houses.

On Tuesday, the Justice Department announced the indictment of three former traders from some of the world’s biggest banks, accusing them of a conspiracy to manipulate prices in a currency market. The next day brought a guilty plea from Volkswagen as well as criminal charges against six Volkswagen executives for their roles in the emissions-cheating scandal, the first major test of Ms. Yates’s new policy. As soon as Friday, the auto parts maker Takata is expected to plead guilty over deadly airbags.

Oh look at that! Where have you guys been? While the yacht has sailed on holding the architects of the Crash accountable, it's nice to drop deserved charges on shady traders and foreign fraudsters. You know, just in time for the Sessions DOJ to take over and blame the VW emissions scandal on African-American voter fraud. Thus Bharra stays on to parade in front of the cameras, while Yates and Caldwell are leaving the DOJ. Godspeed.

At least we'll have our token fines

A good way to deter illegal and unethical behavior is levying half-assed fines to gigantic financial institutions. The fines show the investment firms who's boss. (Them.)

This week, it's Kenneth Griffin's Citadel Financial. It was just a couple years ago that Griffin whined about surviving the onerous Obama Administration. Despite near-fatal injuries in the 2008 crash, Citadel somehow managed to survive minor industry regulation, not to mention a political system hell bent on keeping the rich man down.

“I think they (the ultra-wealthy) actually have an insufficient influence,” Griffin told the Chicago Tribune in an interview in 2012. He also said the rich should be able to put as much money into politics as they want (they can, thanks to Citizens United) and had trepidations about transparency when it comes to campaign donations.

“I do worry about the publicity that comes with being willing to both with my dollars and, more importantly, with my voice to stand for what I believe in,” Griffin told the Tribune.

Ken would have you believe Citadel thrived in spite of all the local and national Democratic Party leaders. So it's no surprise that success-hating liberals are trying to bring this finance hero down:

Despite all of the country's anti-rich persecution, Griffin somehow managed to emerge from the dark days of Obama's Stock Market as the richest man in the state of Illinois and one of the richest hedge fund managers in the world. As a man of unfathomable wealth, this achievement might allow buddy and fellow billionaire Governor Bruce Rauner to replace all the Abe Lincoln statues with life-sized "High Frequency Trading Ken" Dolls.

Cool website going to get us all doxxed for free!

Even though it began in 2015, Family Tree Now Dot Com is the internet we've been waiting for. It's a genealogy website that allows you to trace all your great-great-great drunk ancestors for FREE!

Without signing up or even inputting a fake email address, the site allows anonymous users to access and link to any profiles on the site. A collectivist's dream. We're all in it together: the ancestry buffs, the stalkers, and the data aggregators.

Profiles on FamilyTreeNow include the age, birth month, family members, addresses and phone numbers for individuals in their system, if they have them. It also guesses at their “possible associates,” all on a publicly accessible, permalink-able page.

The site allows a person to "opt out" of displaying records to the public, but to do so requires an unsettling search of your own record. This low-key Doomsday Militia recruiting tool likely lists your current address, where you ex from the pre-Iraq War II good 'ol days can track you down and recoup that Fastball CD. It's also unclear whether the Opt Out actually erases the information from the site. But even if you whack-a-mole Family Tree Now, there's a good chance all your good information is available for the determined. As the Post notes:

[journalist] Julia Angwin compiled an exhaustive list of all the data brokers she could find a couple of years ago, and tried to opt out of having her information included in each of their databases. Fewer than half of the 212 data brokers she identified accepted requests for opt-outs, she wrote in a blog post that gives detailed instructions on how to remove yourself from many of these services.

We live in marvelous times.